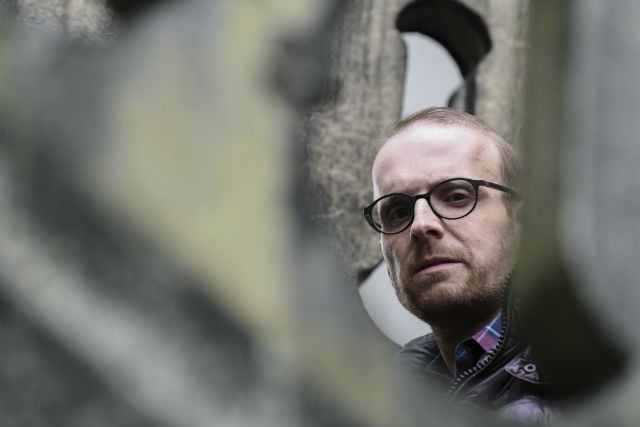 Mike Borowski calls himself a "partisan journalist". Photo: Alain Jocard/AFP
The fresh-faced Franco-Polish founder of the website “La Gauche m'a Tuer” (The Left Killed Me) is one of the most prominent purveyors of far-right fundamentalism in France. His reports and videos are often laced with dubious claims against his rivals, and they often prompt audience engagement levels that mainstream media outlets would dream of.
As a result Borowski is well known to news fact-checking teams, including AFP Fact-Check, which expect to be kept busy as European Parliament elections approach for May 23-26.
Hardly a week goes by without social media users reporting a false claim in one of Borowski's postings or video harangues against favourite targets, not least French President Emmanuel Macron.
But asked if he's deliberately spreading misinformation, Borowski suggests that he sees himself as an editorial writer, and that objectivity isn't the point. “It's partisan journalism. You say it's false, we say it's true, and each side defends its stance,” he told AFP.
READ ALSO: Could France's fake news law be used to silence critics?
His site has been caught in the crosshairs of Facebook, which many governments and rights activists accuse of failing to do enough to curb malicious meddling in high-stakes elections.
Borowski said “Facebook sabotaged my page” last year by limiting his site's visibility in users' news feeds — a policy in which AFP participates via a fact-checking agreement with the social networking giant.
'Even more virulent'
In response, Borowski filed a lawsuit against Facebook for shutting down his page for several weeks early last year — a case he says has convinced the company to think twice before moving against him. “Sometimes all you have to do is bare your teeth,” he said, claiming he could now be “even more virulent” because there was “no more censorship.”
Last year Borowski also paid Facebook nearly 1,000 euros ($1,120) last year to render his latest YouTube videos more visible, according to invoices seen by AFP.
Yet he admits the US social media giant has nonetheless pulled down about a dozen postings for “violating its standards,” and he estimates that fact-checkers have deemed 150 to 200 of his articles to be “false”.
Facebook, which normally prohibits users with questionable records from accessing its “monetisation” services, said it would not comment on individual cases. Mike Borowski started his career as part of the mainstream right. Photo: Alain Jocard/AFP
Borowski began his political career in the rightwing UMP party of ex-president Nicolas Sarkozy, when young recruits created the “La Gauche m'a Tuer” website to attack leftwing rivals ahead of the 2012 presidential vote.
The site shot to popularity after Borowski took over management alone a few years later, with many articles reaching far bigger social media audiences than those of traditional stalwarts like the Liberation daily, Le Point magazine or Europe 1 radio.
“All I had to do was write 'Taubira' and 'prison' and I got 10,000 shares,” he said, referring to former justice minister Christiane Taubira, one of France's few high-profile black politicians.
Shifting tactics
Borowski's “Gauche m'a Tuer” site sticks with a time-tested format: aggressive advertising amid shock headlines claiming any number of lies or misdeeds by government or the media.
His efforts appear to be paying off, with annual revenues in the tens of thousands of euros, according to filings seen by AFP.
The most-shared article on his site dates from 2015, claiming that “several” pensioners get by with less than the “migrants” who are eligible for a monthly stipend of some 500 euros. The allegation fails to stand up to scrutiny, but that hasn't stopped Borowski from keeping it featured high up on his homepage.
Last year YouTube shut down the “Gauche m'a Tuer” channel after three warnings of unsuitable content in three months. That prompted Borowski to create a new channel, “Droitards Mechants” — loosely translated as Nasty Rightwing Bastards — where a recent posting is an expletive-laden tirade against Macron.
He also interviews protesters in the “yellow vest” anti-government movement, most recently a woman claiming France is dominated by multi-billionaires “like the Rothschilds”.
Borowski says he has changed his strategy and is now trying “mainstream things” like citizen journalism — a one-man force underscoring the difficulties in trying to curb the influence of online provocateurs.