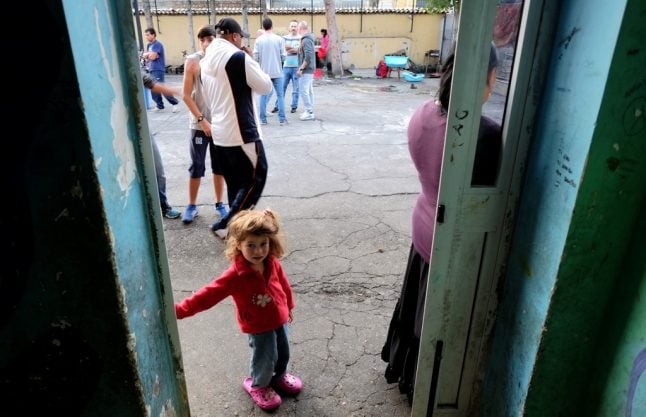 The group, which includes more than 30 children and three pregnant women, will be split up and moved into other shelters around Rome within a week, the council announced on Tuesday evening.

It followed hours of protests on the streets of Torre Maura, the suburb in the east of the city where the Roma had been moved that morning from a nearby housing centre that is due to close.

Between 200 and 300 people joined the unrest, according to reports, including members of the neofascist groups CasaPound and Forza Nuova.

Protesters built barricades out of rubbish and set fire to bins and vehicles, prompting the city to send in riot police.

The mob also hijacked a food delivery destined for residents of the shelter, stamping on sandwiches to render them inedible. “They should starve to death,” the newspaper Repubblica reported hearing people shouting.

Some protesters expressed frustration that the city was housing the Roma group in a deprived area of the capital where many residents suffer from a lack of basic services like supermarkets and public transport.

But the opposition was at least partly motivated by prejudice. “Roma steal, I'm afraid they'll come into my house,” one 75-year-old local woman told Repubblica, while another man in his 30s referred to Roma people as “animals”.

“We cannot give in to racial hatred,” said the mayor of Rome, Virginia Raggi, who criticized a “climate of hate” that she said was being stoked by far-right extremists like CasaPound.

Roma and Sinti people are among the most vulnerable minorities in Italy, many of them housed in squalid government-run camps and subject to eviction with little warning.

Despite the relatively small number – estimated at 120,000-180,000, around half of whom are believed to be Italian citizens – many Roma activists complain of deep-rooted discrimination in Italy, saying that it is difficult for them to find permanent housing or employment and that they are the frequent victims of hate crimes.

Rome's council has steeped up its efforts to evict Roma camps in recent years, despite objections from the European Court of Human Rights that the city is failing to provide adequate alternative housing.

In the Torre Maura case, the group had been living in council housing nearby that the city plans to close. The shelter in Torre Maura was chosen to allow the Roma children to continue going to school in the same area, according to news site NextQuotidiano.

The Rome prosecutor's office is considering opening a case against the protesters of damages and threats aggravated by racial hatred, according to Rai News.

Meanwhile CasaPound has threatened to return to the streets next week if the Roma group has not been moved, while Forza Nuova said that its members would maintain a vigil in Torre Maura “until the last Roma has gone”.