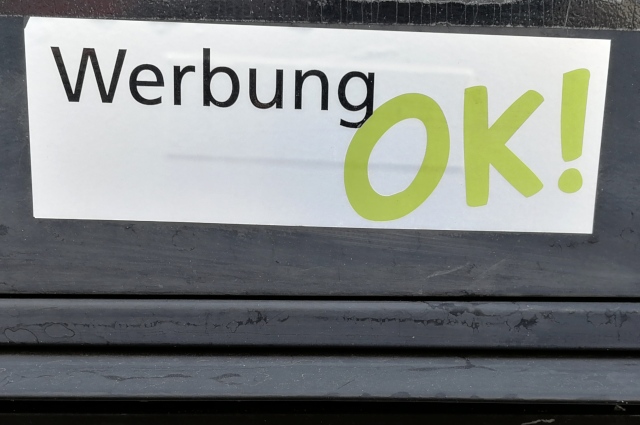 An 'Advertising OK' sticker provided by Swiss Post to householders. Photo: The Local

In Switzerland, if you want to make sure you don’t receive junk mail, you need to put a 'No advertising' (Bitte keine Werbung/Pas de publicité) sticker on your mailbox making this clear.

But for Swiss Post, advertising material is a valuable source of revenue – especially given that the traditional business of sending letters has dropped off considerably in recent years.

This means it's in the interests of the yellow giant to get as many people as possible to say yes to junk mail.

One of the strategies used by The Post is to run regular marketing campaigns which see householders who choose to participate sent free monthly product samples in exchange for removing the ‘No advertising' sticker from their letterbox.

For the latest such campaign, which is running from April to June, The Post sent letters to 250,000 households.

In those letters, the Post said householders could choose to receive free product samples if they removed their 'No advertising' stickers.

At the same time, the Post also included an 'Advertising OK' (Werbung OK/Publicité OK' sticker and told people they could simply stick this over their existing 'No advertising' sticker.

But there is a “trick”, as the consumer group Konsumentenschutz points out. Anyone who either removes their 'No advertising' sticker or places the new sticker over the top will end up receiving a lot of other junk mail for the duration of the marketing campaign.

The organization recognizes that the Post is not doing anything illegal. In fact, the state-owned company has the backing of the federal government, which has recognised the marketing campaigns as a valuable source of revenue.

But Konsumentenschutz says it has received a large number of complaints about the practice.

Greens MP Lisa Mazzone has also objected to the idea of a public company running this type of marketing campaign.

She told Swiss daily Tages Anzeiger it isn't acceptable that the Post sends out ‘Advertising OK’ stickers but not ‘No advertising’ stickers. The MP recommended consumers write to the Post and complain.

Meanwhile, Konsumentenschutz will send a free ‘No advertising’ sticker to anyone who sends them an ‘ Advertising OK’ sticker (or a photo of the sticker) that they have received from the Post.