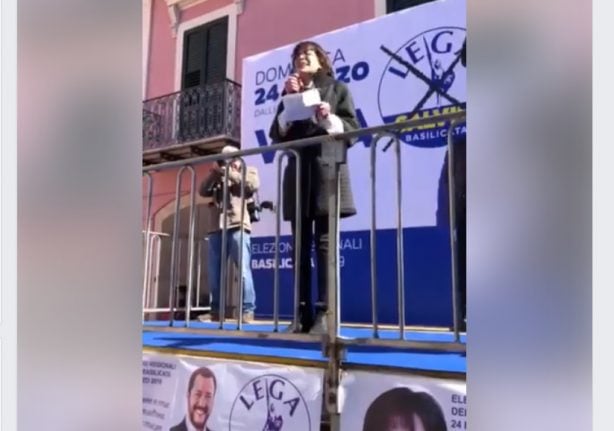 A screenshot of the video on Gerarda Russo's Facebook page

A video that has been widely shared on social media platforms shows protesters chanting “fascists, fascists” at Gerarda Russo as she addresses the crowd from a podium. Midway through her speech Russo appears to shout into her microphone “I am a fascist!”, causing the protesters to erupt with cries of “fascist!” and “proud to be a fascist!”.

Valerio Tramutoli, the candidate for the new left-wing party Basilicata Possibile, has said he intends to file a complaint with the Potenza public prosecutor’s office against Russo on grounds of fascist apologism.

Fascist parties are banned in Italy’s constitution, but that hasn’t stopped fringe neo-fascist groups like Casapound from gaining momentum in recent months.

Russo later published a longer version of the video on her Facebook page which she said provided context for her comments, and dismissed her critics as “cowards” and “boys”.

“It was a response to young people who do not know the meaning of democracy, protesting during the rally and accusing me of being a fascist.

“You’ve also called me racist, xenophobic and populist … I am proud to be Italian, just like Matteo Salvini has said.”

The League party is the minority partner in Italy’s coalition government, which is led by the anti-establishment Five Star Movement (M5S), but the League's popularity has soared since the group came to power last May and as of Monday the party was polling at 33.9% compared to M5S’s 21.0%.

The League is forecast to perform well in the upcoming European parliamentary elections which will take place between May 23 and 26, 2019.

The Basilicata regional elections will be held on March 24.