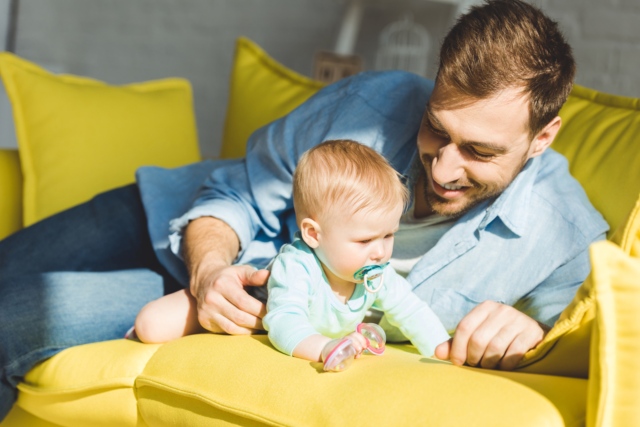 There is currently no statutory paternity leave in Switzerland. File photo: Depositphotos

Novartis confirmed the news of its new parental leave arrangements to The Local.

It said it would be implementing a global policy standard of 14 weeks' paid leave for all legal parents (birthing or non-birthing) as of July 1st, regardless of gender.

This would make Novartis the most generous employer in the country in terms of parental leave, according to figures published by the CH media group.

The announcement from Novartis has breathed new life into the political debate around paternity leave in Switzerland.

Switzerland currently has no statutory paternity leave at all, with most fathers only allowed to take one ‘family day' of leave upon the birth of their child.

In fact, the Swiss parliament has rejected proposals looking at introducing paternity leave on more than 30 occasions in recent years – most recently in 2016 when a proposal for two weeks leave was narrowly voted down.

The issue is partly one of costs, while there has been a feeling that “Swiss families should organise paternity leave themselves” with fathers taking time off work from their holiday entitlements, the president of Swiss union Travail.Suisse Adrian Wüthrich told The Local recently.

Read also: The pros and cons of having kids in Switzerland

Wüthrich, also an MP with Switzerland's Socialists, is one of the key figures behind a popular initiative calling for all Swiss fathers to get 20 days’ statutory paternity leave to be taken within the first year of their baby's life. That leave would be financed through the same system of deductions used to fund maternity leave.

But the government has rejected the plan, which is supported by over 180 groups and associations. It says the initiative would place too great a burden on the economy and present companies with organizational challenges.

Recently, the vice director for the SGV industry association Kurt Gfeller said that absences on the part of young fathers would make life difficult for small and medium-sized enterprises where whole departments were sometimes the responsibility of a single person.

He wants companies to be able to voluntarily introduce paternity leave.

But Wüthrich dismisses claims that industry players would be unable to find a solution to issues raised by paternity leave.

He says that the experience of firms like Novartis shows that large companies are already using parental leave entitlements as a way to woo talent. Meanwhile, arguments that smaller firms would be unable to plan for paternity leave do not hold weight.

“Companies would have six to nine months to plan for this leave, and it would be spread out over several months,” he told The Local.

“In addition, because of Switzerland’s military service, companies are used to be people being away for certain periods for training,” he said.

He also noted that the number of days of military service has come down from 260 to 245, reducing the burden on smaller firms.

The Swiss parliament is now working on a new paternity leave proposal which would give fathers two weeks of statutory leave – a move that Wüthrich says has come in direct response to the four-week proposal developed by Travail.Suisse.

The proposal has a good chance of being passed by the parliament, according to Swiss media. But Wüthrich told the Local that the four-week proposal was still very much on the table. He said the plan, which offered a great deal of flexibility, was already the result of compromise and stressed that two weeks was not long enough.