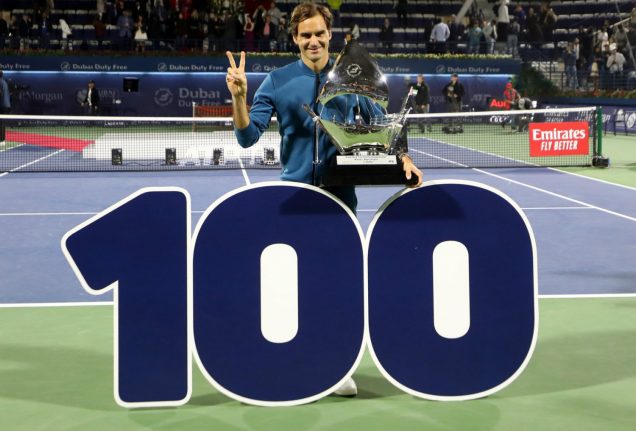 Federer reached the landmark with a ruthless 6-4, 6-4 dismantling of Greece's Stefanos Tsitsipas in the Dubai Championship final, his eighth trophy at the Gulf event.

His 100th title comes 18 years after he captured his first in Milan.

Federer, the winner of a record 20 Grand Slam titles, said that he's not particularly targeting the 109-mark of Connors.

“You can play a great tournament, play a brutal semi, you get unlucky sometimes with the schedule, whatever it may be.

He added: “That's why you have to be fit on many fronts: mentally, physically; you have to be able to beat different types of players: beat them all on successive days.”

Connors, who set his record during his glory years in the 1970s and 1980s, took to Twitter to congratulate the Swiss star.

“Welcome to the 'Triple Digit' tournament victory club @rogerfederer – I've been a bit lonely – glad to have the company,” wrote the American.

Welcome to the “ Triple Digit” tournament victory club @rogerfederer — I’ve been a bit lonely- glad to have the company !!!

Federer, who remains a long way back from the all-time mark of 167 titles set in the women's game by Martina Navratilova, said that his two-decade longevity was key to the title century.

“It's a deep satisfaction, an immediate one. A lot of people always emphasise all the Slams, but I play on the ATP Tour. This is where I've won so many of them. Been around for so long,” he added.

“I don't rest between Slams all the time, like people think I might be. I think this number proves that. I think that's why this was a very exciting week for me.”

The Swiss star will have little time to contemplate achieving yet another record with Indian Wells in California, next on the agenda for the first Masters of the season.

“I didn't come here expecting I was going to win, to be quite honest. I hadn't played since Australia,” explained Federer who had been defeated by Tsitsipas in the fourth round at the Australian Open in January.

“I'm just happy on all fronts how my game has progressed, how well I played in the final, winning the eighth Dubai title, winning the 100th.

Federer's 99th trophy had come last October at his home event in Basel.

He missed out on the century at the Paris Masters, the ATP Finals in London and then at Melbourne.

On Saturday, the second seed was untouchable throughout much of the 69-minute final as he gained revenge for his shock Australian Open defeat by the 11th-ranked Greek.

Tsitsipas, who will become the first Greek to ever reach the world's top 10 on Monday, paid tribute to his opponent.

Tsitsipas admitted he had few chances in the rout.

“He was very aggressive, didn't give me any time today. I was expecting it,
for him to be a little more aggressive.

“He just seemed like having control over everything he was doing, taking the ball super early, on the rise, giving me no time to prepare.

Tsitsipas saw the end of an eight-match winning streak as he arrived in the Gulf with the Marseille title from last weekend.

Federer broke in the opening game of the final, but had to battle to claim the opening set.

Tsitsipas saved three set points in the final game before Federer — who faced two break points — finished off the set as the Greek returned wide.

In the second set, a break in the penultimate game for 5-4 and a service hold a game later were enough as Tsitsipas put a forehand into the net.

Is it the end of the line for Roger? Photo: Martin BUREAU / AFP

The 20-time Grand Slam winner announced on Wednesday that he would be sidelined until 2021 after his second operation in a matter of months.

Federer remains upbeat, tweeting: “I plan to take the necessary time to be 100 percent ready to play at my highest level.”

In some ways 2020 is a good season to miss after the coronavirus ravaged the tennis schedule. Writing Federer off in the past has proved dangerous.

He returned from a six-month injury lay-off to claim the Australian Open in 2017, winning his eighth Wimbledon crown later that year.

But he will be 40 in 2021 and is now heading into uncharted territory.

Despite his groaning trophy cabinet, there are two factors that will motivate Federer to keep going — the risk of losing his grip on the men's Grand Slam title record and a missing Olympics singles gold medal.

Rafael Nadal has 19 majors, just one shy of Federer's mark and Djokovic has 17.

Spain's Nadal will be fancied to draw level with Federer at the French Open, rescheduled for September, while few would bet against Djokovic winning in New York weeks earlier.

In April, Federer said he was “devastated” when Wimbledon was cancelled for the first time since World War II. Last year he fell agonisingly short at the All England Club, failing to convert two championship points on his own serve against Djokovic.

The Wimbledon grass probably remains his best chance of adding to his Grand Slam collection — he has not won the US Open since 2008 and his only title at Roland Garros came in 2009.

Even though Federer has slipped from the very pinnacle of the game, he is still a major threat to Nadal and Djokovic.

Last year, the world number four had a 53-10 win-loss record and he reached the semi-finals at the Australian Open in January in his only tournament this year.

Federer, who is still six ATP titles short of Jimmy Connors' all-time record of 109, has one glaring omission from his CV — the Olympic title.

The Swiss won doubles gold in Beijing in 2008 with compatriot Stan Wawrinka but lost in the singles final to Andy Murray in London four years later.

The postponed Tokyo Games will almost certainly be Federer's last opportunity to complete a career “golden” Grand Slam — he will turn 40 on the day of the closing ceremony next year.

Tennis will feel the loss of the elegant Federer keenly when he walks off the court for the last time.

Djokovic and Nadal have been the dominant forces in recent years but the Swiss remains the biggest draw and last month topped Forbes' list of the world's highest-earning athletes.

His last appearance on court was in front of nearly 52,000 fans — touted by organisers as a world record for tennis — at a charity match against Nadal in Cape Town in February.

Federer is nearly always the crowd favourite wherever he plays and has proved a perfect ambassador for the sport since he won his first Grand Slam title in 2003.

He certainly expects to be back and competitive next year.

“I will be missing my fans and the tour dearly but I will look forward to seeing everyone back on tour at the start of the 2021 season,” he tweeted.

The avalanche of support from his adoring fans showed they would miss him too, but they will have to get used to a time when he is gone for good.