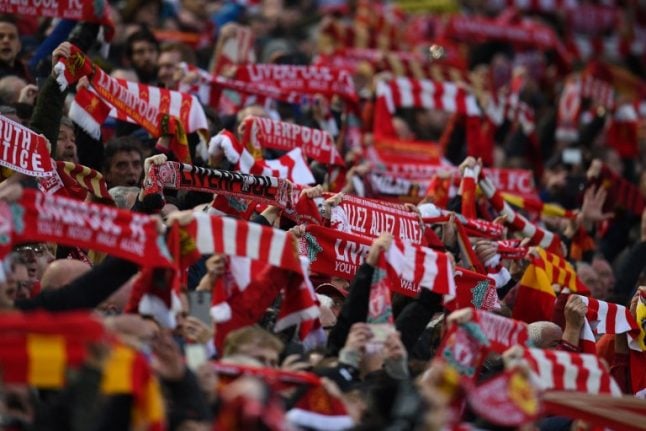 Liverpool and Roma fans at the match in April 2018 before which Sean Cox was attacked. Photo: Oli Scarff/AFP

Simone Mastrelli, 30, from Rome, pleaded guilty to unlawfully and maliciously inflicting grievous bodily harm on Sean Cox outside Liverpool's Anfield Stadium on April 24th, before their match with Italian side Roma.

Irish national Cox suffered a severe, traumatic brain injury as a result of the attack and is still recovering after spending four-and-a-half weeks at a specialist neurological unit.

Mastrelli knocked Cox unconscious with a single heavy blow to the face, as he led a group of 'ultras', some of whom were carrying belts in their hands as weapons.

READ ALSO: Roma donates €150,000 to Liverpool supporter beaten up by their fans Cox's daughter Shauna, 20, read out a statement as Mastrelli watched on at Preston Crown Court in northwest England.

“Before this brutal and vicious attack my dad was a fit and confident man, a man of integrity with a huge passion for life who represented everything which is good,” she said. “This violent and unprovoked attack left dad in a dire situation.

“His future is uncertain. We don't know how he will progress and that really frightens us.”

Mastrelli was arrested in Italy last month on a European arrest warrant before being extradited to Britain.

Judge Mark Brown, told Mastrelli that “there is no doubt in my mind that you went to the stadium as a group to sort out the Liverpool supporters and in doing so you have destroyed the life of an innocent man and his family.

“This was, on any view, a dreadful offence. It has had a profound impact on Mr Cox and his family.”

Sporadic trouble broke out in Liverpool city centre before the match as more than 50,000 fans made their way to Anfield, including around 5,000 Roma fans.

On August 2nd 1980, a bomb exploded in the railway station’s waiting room, causing devastation on an unprecedented scale.

Five members of terrorist groups were later convicted in relation to the bombing, the worst episode in Italy’s ‘Years of Lead’ period of political violence in the 1970s and 80s.

Most recently, in 2020, a former member of the far-right Armed Revolutionary Nucleus (NAR) was sentenced to life imprisonment for providing logistical support to those who carried out the attack.

But suspicions remain of cover-ups and the involvement of “deviant elements” within the nation’s security services, reported Italian news agency Ansa.

“The bomb that killed people who happened to be at the station on that morning 42 years ago still reverberates with violence in the depths of the country’s conscience,” Mattarella said in a speech marking the anniversary on Tuesday.

“It was the act of cowardly men of unequalled inhumanity, one of the most terrible of the history of the Italian Republic.

“It was a terrorist attack that sought to destabilise democratic institutions and sow fear, hitting ordinary citizens going about their everyday tasks.

“On the day of the anniversary our thoughts go, above all, to the relatives forced to suffer the greatest pain.

“The neo-fascist nature of the massacre has been established in court and further steps have been made to unveil the cover-ups and those who ordered the attack in order to comply with the Republic’s duty to seek the full truth”.

The bombing remains Western Europe’s fourth deadliest postwar terror attack, and one of the most devastating in Italy’s history.