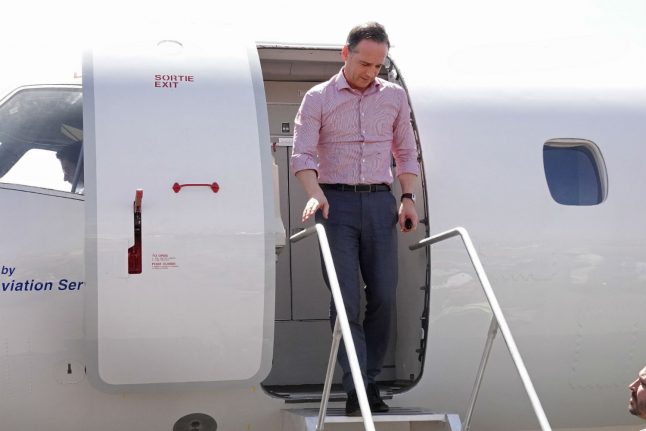 Maas, whose tour of West Africa included Sierra Leone, Burkina Faso and Mali, was stuck in the Malian capital Bamako after a hydraulic problem with his Airbus A319's landing gear.

A Luftwaffe (air force) Airbus A340 took off from Cologne Friday morning to fetch the country's top diplomat back to Germany, a foreign ministry spokesman said.

A string of technical problems have plagued German government aviation, with Chancellor Angela Merkel missing the opening of the November G20 summit in Argentina after her A340 was forced to land in Cologne due to electrical problems.

President Frank-Walter Steinmeier was also stuck in Ethiopia at the end of January for similar reasons while Development Minister Gerd Mueller had to cancel a trip to Namibia at the start of the year following problems with his plane.

Despite the massive press attention on the problems, just 21 government flights were cancelled or otherwise troubled by technical defects of 1,743 between 2016 and 2018, a government spokesman said Friday.

But Berlin is looking into buying new planes over the coming years as the existing fleet is “small” and “relatively old”.

A woman stands with a poster reading 'Where is Roman (Protasevich)?!' in the arrival area as passengers disembark from a Ryanair passenger plane from Athens, Greece, that was intercepted and diverted to Minsk on the same day by Belarus authorities. Photo: Petras Malukas/AFP

“The explanations of the Belarusian government for the forced landing of a Ryanair plane in Minsk are absurd and not credible,” Foreign Minister Heiko Maas said in a statement.

“We need clarity on what really happened on board and on the ground,” he added, saying that ambassador Denis Sidorenko was expected at his ministry Monday evening.

Maas said Berlin also expected “clarity about the wellbeing” of the detained journalist, Roman Protasevich, and his girlfriend, saying both “must
be released immediately”.

He said a senior official at the ministry, Miguel Berger, would meet with Sidorenko, while EU leaders debate “consequences” at a summit in Brussels.

The Ryanair flight from Athens to Vilnius carrying Protasevich was diverted while in Belarusian airspace over a supposed bomb threat.

Accompanied by a Belarusian fighter jet on the orders of strongman Alexander Lukashenko, the plane landed in Minsk where Protasevich, a
26-year-old who had been living in Lithuania, was arrested along with his Russian girlfriend.