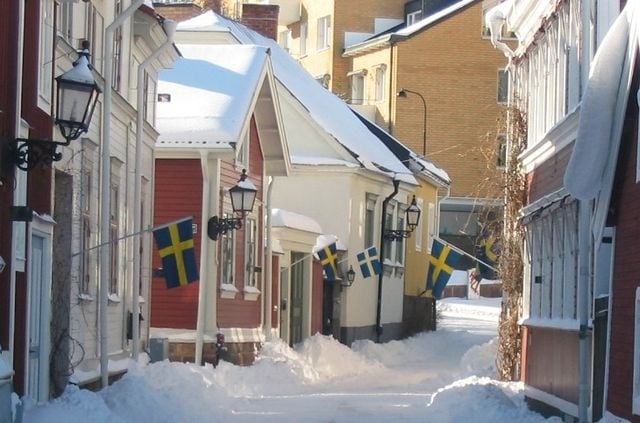 For the past week, the image of a teacher has appeared on a digital billboard welcoming visitors to Gävle, a city in central Sweden. The teacher is a Muslim woman who wears a hijab (a headscarf covering the hair), and the image was widely shared by far-right Twitter accounts and websites, which misrepresented the campaign as 'Islamization',  before it was vandalized over the weekend.

Multiple instances of vandalism caused the billboard to stop working, as the local Gefle Dagblad was first to report.

In the international reports, details about the context of the campaign were left out. The woman was one of 100 residents of Gävle nominated by fellow locals and chosen to represent the city in a publicity campaign celebrating the fact the city's population passed 100,000 in 2017.

“We let Gävle residents freely nominate people they saw as good ambassadors for the city. A jury, also made up of Gävle residents, then chose 100 ambassadors, who were all photographed and these photos were put up in different places around Gävle,” municipal press officer Johan Adolfsson told The Local.

He said that in the selection process, the jury was “careful to reflect the diversity of Gävle”, with men, women, children, and people of all ages, sexualities, religions, careers, and backgrounds chosen for the campaign.

The teacher, who grew up in Gävle and became a practising Muslim in her late teens, according to a 2009 interview in the regional newspaper Arbetarbladet, was chosen because of her work with children, despite a cancer diagnosis.

The jury's explanation for her nomination described her as someone who “is always in a good mood and never gives up” and said that most students and teachers in the city knew the teacher and had positive things to say about her.

Gävle MP Roger Hedlund, a member of the far-right Sweden Democrats, also criticized the sign online, saying that headscarves “reduce women to a simple sex object who must cover up in order not to arouse male desire”.

Several of the international websites which shared the image implied she had been chosen as the city's sole representative, including Russia Today's English-language site, Polish conservative news site Najwyższy Czas, and the major Hungarian news site Origo.

The alt-right website Voice of Europe said that “many Swedes” believed the temporary sign “indicates that the city is Muslim”. It also appeared to explicitly encourage vandalism of the sign, referring to the illegal tradition of burning the city's Christmas goat, and writing “Maybe the board will meet the same fate?!”

Several of the sites also said the woman was a “guide” or “worked with” a radical mosque, apparently due to the fact she had spoken positively about the opening of a new mosque in Gävle in 2009 and showed a journalist around the building.

Five years later, multiple reports surfaced of board members and an imam at the mosque being accused of radicalism, including sharing photos on social media of Isis flags. There are no reports linking the woman to any of these claims, and it is not clear whether she is still involved in the mosque in any way.

Municipal press officer Johan Adolfsson said that the city plans to continue with the campaign, which will see the pictures on the digital billboard change to a different ambassador each week.

“We have and will continue to include Muslim women, with and without a veil,” Adolfsson said. He also confirmed to The Local that the municipality would report the vandalism to police.

“The response has only been positive: until last week when reactions came to the picture on the billboard,” he added. In fact, the city's focus on diverse messaging (including LGBT people, people with disabilities, and those of different ethnicities) has been highlighted in a handbook by the Swedish Institute and Foreign Ministry, and in exhibitions around Sweden which will soon also take place in other countries.