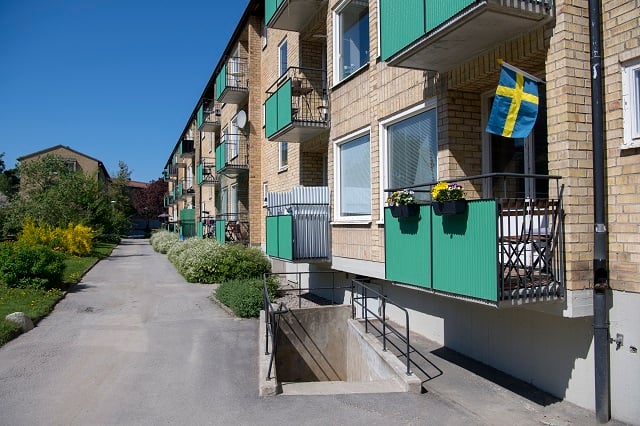 Apartments in a suburb outside Stockholm. Photo: Henrik Montgomery/TT

The government has already proposed abolishing rent controls on newly produced properties as part of a cross-bloc deal the ruling Social Democrats and Green Party made with the Centre and Liberal parties, whose support was needed to break a months-long political deadlock.

This move was welcomed by the IMF in its annual evaluation of the Swedish economy, but it also said that “more fundamental reforms” are needed in order to deal with the national housing shortage.

The organization suggested that one way of moving gradually towards deregulation would be to introduce market rental prices each time a new tenant moves in.

FOR MEMBERS: How to navigate Sweden's crazy rental market

This would likely lead to substantial increases in the cost of rent, so the IMF also proposed measures to compensate for this, such as increased housing benefits and taxes on properties.

And it added: “To help reduce market rents more quickly, rental supply should be increased, such as by reducing impediments to subletting and to households renting out their own apartments, while containing potential macrofinancial risks.”

Housing prices in Sweden fell by six percent towards the end of 2017 following years of steady growth, but stabilized over the past year. The IMF noted that in highly populated areas, prices remain high compared to household incomes, making it hard for many people to buy homes.

This, combined with the long queues for rent-controlled apartments, pushes people towards expensive sublets or alternative rentals, particularly in the younger age group and foreign-born demographic.

“These barriers to labour mobility weigh on Swedish productivity and incomes, and raise inequality across regions and between generations,” the organization said, emphasizing the need for affordable housing.

The IMF report also addressed fiscal and labour market policy, and praised government efforts to integrate more foreign-born people into the workforce through policies such as jobs that combine work and training.