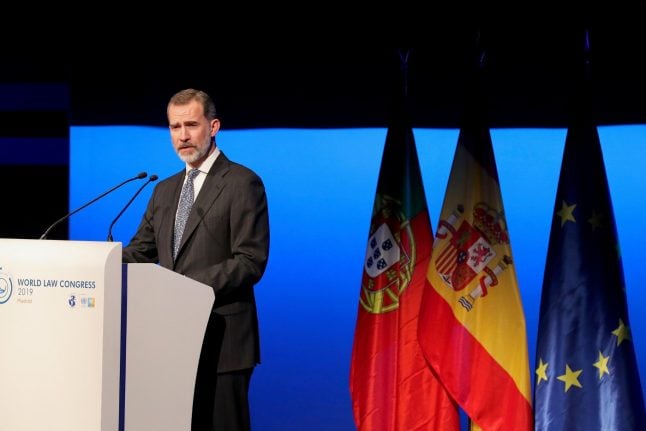 “It makes no sense, it's unacceptable to appeal to a so-called democracy that is above the law,” the monarch told an international congress of legal experts in Madrid.

“Without respect of the law, there is neither peaceful coexistence nor democracy, but insecurity, arbitrariness and ultimately, the collapse of the moral and civic principles of society.”

In his speech published on the royal palace's website, Felipe VI makes no explicit reference to the ongoing trial of 12 Catalan separatist leaders and activists, nine of whom are accused of rebellion.

But the Spanish media immediately linked it to comments made by some of the defendants who have already taken the stand in Madrid's Supreme Court.

They justify holding an independence referendum on October 1st, 2017 in defiance of Spain's Constitutional Court on a democratic mandate they say they got from voters in Catalonia.

These handed separatist parties a majority in the regional parliament in 2015 polls.

The results of the referendum, in which regional authorities said 90 percent voted to secede, prompted a short-lived declaration of independence.

“I think that Spain's Constitutional Court is significantly lacking in moral authority,” Josep Rull, a former member of Catalonia's separatist government who faces up to 16 years in jail, told the Supreme Court on
Wednesday.

He said that regional leaders “fulfilled their democratic mandate” by organising the referendum.

On Tuesday, Catalonia's former regional government spokesman Jordi Turull, also on trial, told the court “it's totally normally to try and do what you promised to citizens of Catalonia in a peaceful and democratic manner.”

The trial, the most high-profile in Spanish democracy, is due to last three months.

It is being broadcast live on television and online.

Sweden’s Royal Court announced that Prince Daniel had tested positive in a press release issued on Sunday, while Crown Princess Victoria’s second infection was revealed in another release on Saturday.

The royal couple, who are both fully vaccinated, first tested positive for the virus in March last year, and have only mild symptoms.

According to the press releases Prince Daniel was suffering “very mild symptoms and feels well”, while Princess Victoria has “the symptoms of a cold but otherwise feels well”.

The couple are both now isolating in Haga Palace in the north of Stockholm, where they have lived since 2010.

Sweden’s King Carl XVI Gustaf and Queen Silvia, who are triple-vaccinated, both tested positive on Tuesday. The couple are now symptom-free, but are continuing their isolation at Drottningholm Palace to the west of Stockholm.