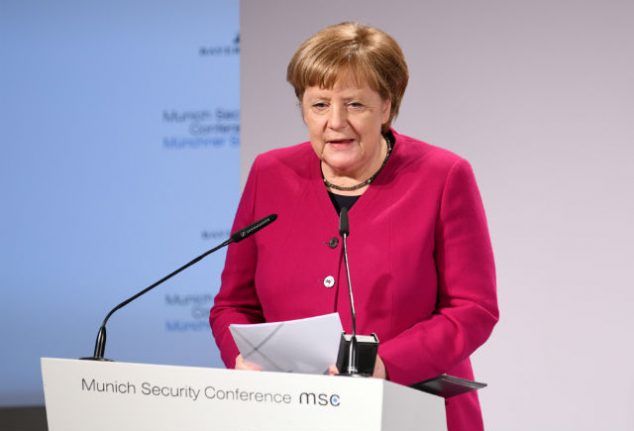 German Chancellor got a standing ovation after her speech.Photo:Tobias Hase/dpa

In one awkward moment Friday, US Vice President Mike Pence said he was bringing greetings from Trump, only to be met with stony silence from a room full of national leaders, ministers and generals.

“We are proud of our cars and so we should be”
“If that is viewed as a security threat to the United States, then we are shocked”

Especially Trump's announcement he would soon pull American troops out ofSyria has left allies scratching their heads about how to prevent further chaos and instability there.

French Foreign Minister Jean-Yves Le Drian — whose country contributes about 1,200 troops in the region — asked why the US would create a power vacuum that could benefit its declared enemy Iran, calling it a “mystery”.

A French government source criticised the Trump administration's approach as “we're leaving, you're staying” and added: “They're trying to manage the consequences of a hasty decision and making us carry the responsibility.”

In his main speech on Saturday, Pence delivered more stern advice for other nations in Europe and beyond.

He reiterated Washington's contention that Iran was planning a new “Holocaust” and told European powers to scrap the 2015 nuclear agreement with Tehran that Trump ripped up last year.

He also criticised a recent initiative of France, Germany and Britain to allow European companies to continue business operations in the Islamic republic despite US sanctions.

EU diplomatic chief Federica Mogherini said Friday the bloc was determined to preserve the “full implementation” of the deal, stressing it was vital to European security.

German Foreign Minister Heiko Maas argued that without the pact, “the region will not be safer and would actually be one step closer to an open confrontation”.

Pence praised some NATO allies for having raised defence spending but reminded others that their contributions were still falling short of the target of two per cent of GDP.

And he reiterated strong US opposition to the Russia-Germany gas pipeline Nord Stream 2 being built that Trump has charged makes the largest EU economy a “captive” of Russia.

“The United States commends all our European partners who have taken a strong stance against Nord Stream 2, and we commend others to do the same,” Pence said.

He went on to also criticize pending weapons purchases by NATO allies “from our adversaries” — seen by Moscow media as a reference to a planned Russia-Turkey arms deal.

“We cannot ensure the defence of the West if our allies grow dependent on the East,” Pence said.

On crisis-wracked Venezuela, he called on the 28-member EU to recognize opposition leader Juan Guaido “as the only legitimate president”.   “Once more the Old World can take a stance in support of freedom in the New World,” he said.

'Proud of our cars'

But there was spirited pushback from Merkel, the veteran leader who has sometimes been dubbed the leader of the free world, and who has spoken out more strongly in her final term as chancellor due to end in 2021.

On Syria, where US-backed Kurdish-Arab forces were clearing the final scrap of territory held by Islamic State jihadists this week, she openly challenged the wisdom of the looming US troop withdrawal.

“Is it a good idea for the Americans to suddenly and quickly withdraw from Syria?” she asked. “Or will it once more strengthen the capacity of Iran and Russia to exert their influence?”

On the trade dispute, she insisted that in Germany “we are proud of our cars” and explained that the biggest plant of luxury brand BMW was not in Bavaria but in South Carolina, from where it exports vehicles to China.

“All I can say is it would be good if we could resume proper talks with one another,” she said.

She also argued that the West must maintain dialogue with Russia, despite the Ukraine conflict and other deep differences.

Most crucially, Merkel cautioned against the erosion of multilateral cooperation to tackle global problems, saying that “we must not simply smash it to pieces”.