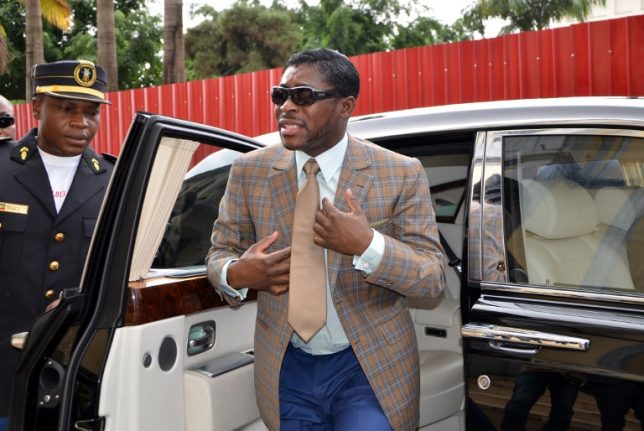 Obiang, 50, and two other individuals had been facing prosecution for “money laundering and misappropriation of public assets.”

Under the Swiss penal code, prosecutors can choose to drop charges in this category if defendants offer compensation “and restore a situation that is in conformity with the law.”

In a statement, the public prosecutor for the canton (region) of Geneva said Equatorial Guinea was also paying 1.3 million Swiss francs ($1.3 million, €1.14 million) “to cover the cost of proceedings.” In addition, 25 luxury cars, seized as part of the investigation, had been confiscated, the statement said.

“They will be sold and the net proceeds of the sale will be assigned to a social programme within Equatorial Guinea,” it said.

The decision also entails lifting a sequestration order that investigators had slapped on a yacht in the Netherlands, the Ebony Shine, in December 2016, it said. The statement did not give details about the cars or which of the defendants owned them.

In 2016, a Swiss weekly newspaper called L'Hebdo said the batch included a Porsche 918 Spider valued at €750,000, a Bugatti Veyron worth €2million and a Swedish supercar, the Koenigsegg One:1.

Only half a dozen Koenigsegg One:1 models have ever been built, each selling for a reputed $2.4 million (€2.1 million). Obiang is the son of President Teodoro Obiang Nguema, 76, who has ruled the tiny oil-rich West African state since 1979, ousting his uncle in a coup. Critics accuse him of brutal repression of opponents as well as election fraud and corruption.

Vice president with responsibility for defence and security, Teodorin Obiang has a reputation for a playboy lifestyle.

In October 2017, a Paris court handed him a three-year suspended jail term after convicting Obiang of siphoning off public money to buy assets in France. He was accused of spending more than 1,000 times his official annual salary
on a six-storey mansion in a posh part of the French capital, a fleet of fast cars and artworks, among other assets.
He was also given a suspended fine of 30 million euros.

In September, Brazilian media said that more than $16 million (€14 million) in cash and luxury watches were seized by Brazilian police and customs officers from luggage of a delegation accompanying Obiang on a private visit.

O Estado de Sao Paulo quoted a diplomatic source from Equatorial Guinea as saying the money was to pay for medical treatment Obiang was to undergo in Sao Paulo.

The watches were for the “personal use” of the president's son and were engraved with his initials, the report said.
Obiang is reputedly on a fast track to succeed his father. Last October, he was promoted from colonel directly to division general, without passing through the normal intermediary rank of brigade general.

The following month, he presided over a cabinet meeting for the first time.