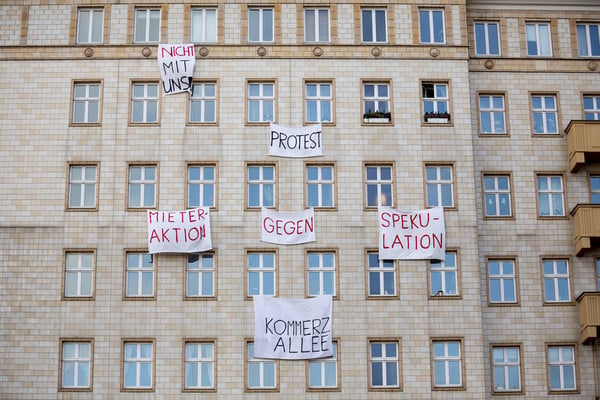 Signs protesting the sale of apartments to Deutsche Wohnen hang on a building on Karl Marx Allee. Photo: Christoph Soeder/DPA
A plan by a property management firm to offload 700 apartments on the boulevard to another company has raised the ire of tenants, who fear it could lead to rent hikes.
A fight that erupted in November last year has culminated in what essentially is the re-nationalisation of the apartments — ending a trend of privatisation of social housing and bringing the ownership of the blocks back to their socialist origins.
The emblematic struggle has also sparked a debate in the German capital on whether authorities should be allowed to take the radical step of requisitioning apartment buildings.
Berlin's mayor Michael Müller said the fight against property speculation was only beginning and that the city would look to reclaim more apartments from private hands following the Karl Marx Allee example.
“That means that privatisation, which has turned out to be a mess, will be halted and apartments will once again be the responsibility of Berlin city, through public housing administrators,” said Anja Kaehler, a tenant at Karl Marx Allee. Steep cost
But the move to re-nationalise the Karl Marx Allee buildings will come at a steep cost to the state, with estimates ranging at between 90 and 100 million euros ($100-115 million). Critics also charge that it will violate the principle of protection for private property rights.
Nevertheless, some tenants' rights activists want to push authorities to go further, with a drive under way for a referendum allowing the government to requisition properties from big companies that own more than 3,000 apartments in the capital. If initiators of the proposed referendum petition manage to collect 170,000 signatures by April, Berliners would get to vote on the issue.
Like in cities worldwide, property prices in Berlin have shot up as it has shed its Cold War divided past to establish its political might, and become a tourism and party hotspot as well as an investment magnet. Although there are still huge swathes of unbuilt land and new construction mushrooming across the city, many low-income locals are increasingly getting priced out of the market.
The jump in property prices is all the more evident in places like Karl Marx Allee, which geographically sits close to the centre of a unified Berlin.
A broad 90-metre wide boulevard lined with seven to nine-storey massive blocks in the classical socialist style of the 1950s, Karl Marx Allee was built by the GDR communist government to “impress the world” and “intimidate its own workers”.
Some in reunified Germany find the visual reminder of the communist years depressing, but many who call the street their home would not give it up for the world.
“What makes our Karl Marx Allee special is the architecture. We can imagine that we're in Moscow or Warsaw,” said Ruth Notowicz, standing on her balcony overlooking the avenue that tanks rolled down during celebratory military  parades.
Running 2.6 kilometres through the heart of East Berlin, the buildings lining the boulevard were also known as “wedding cake-style workers' palaces” for their decorative flourishes.
'Housing security'
Anja Kaehler, who has lived in one of the blocks for 15 years, noted that, in the GDR era, residents from “factory workers to managers” lived next to each other in the flats.
“I also came from East Germany, and in these buildings, I see something of what was positive about the regime — housing security at a low price,” said Kaehler, also a tenant representative.
After reunification in 1990, the flats which were once owned by the communist state were entrusted to local authorities, who subsequently embarked on the path of partial privatisation from 1993.
Although the 700 apartments in question were in private hands, rents held at around 10 euros a square metre — the lower bracket of current market prices. But in November, tenants were informed that property owner Predac was selling the apartments in three blocks to real estate consortium Deutsche Wohnen.
The news sparked an outcry, with tenants fearing that Deutsche Wohnen, which owns 115,000 flats across Berlin and its surrounding regions, could significantly raise rents.
Residents, lawyers and politicians leapt into action and managed to force a court order for a temporary halt to the sale as tenants mulled using their first right to buy under Berlin property rules.
In an ironic nod to history, a sufficient quorum of tenants called for a re-nationalisation of the buildings.
For the residents, their fight is not about “Ostalgie” — a word play blending the German for nostalgia and the former East Germany.
“Most tenants never knew the regime and they are the ones who are mobilised, they woke up through the communal action,” Notowicz said.
By AFP's Daphne Rousseau