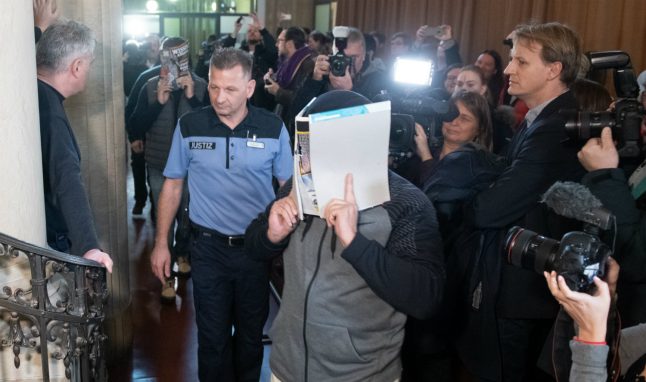 One of four defendants charged in connection with the theft of the gold coin Big Maple Leaf from the Bode-Museum arrives at the Berlin trial Thursday. Photo: DPA

Police had “presented not a single shred of firm evidence”, argued Toralf Nöding, defence lawyer for the three alleged thieves, brothers Ahmed, 20, and  Wayci Remmo, 23, and their cousin Wissam Remmo, 21.

Nöding also charged that his clients had suffered prejudice from broad media coverage on their extended family with roots in Lebanon, several of whose members have been jailed for involvement in violent or organized crime.

Police have found no trace of the 100-kilogramme Canadian coin since the late-night heist in March 2017 from the German capital's Bode Museum, located close to Chancellor Angela Merkel's apartment.

Police assume the nearly pure-gold treasure, which has a face value of one million Canadian dollars, was either cut up, molten down or taken abroad.

Police staged raids in July 2017 involving 300 officers on premises in and around Berlin linked to the Remmo clan to gather evidence. They confiscated guns, luxury cars and more than €100,000 in cash.

If found guilty of theft in the juvenile court case, the three suspects, all registered as unemployed, would face jail terms of up to 10 years.

Also in the dock and claiming innocence was 20-year-old former museum security guard Denis Umut W., the alleged inside man, accused of giving the others crucial information for the break-in.

His lawyer Marcel Kelz denied media reports that his client had made major purchases, including an €11,000 gold chain, and shown interest in buying a Mercedes Benz car and property months after the heist. The “Big Maple Leaf”, one of five minted in 2007 with a portrait of Queen Elizabeth II, is considered the world's second-largest gold coin after the one-tonne Australian Kangaroo issued in 2012.

The coin, which has a diameter of 53 centimetres, was on loan from an unidentified collector to the Bode Museum, which bills its exhibition of coins and medals as a “chronicle of human history forged in metal”.

They broke in through a window, smashed a glass case with an axe and used a rope, wooden beam and a wheelbarrow to lift the coin onto adjacent elevated urban railway tracks.

The coin was probably damaged when the thieves dropped it twice — once on the tracks that pass the museum and cross the Spree river, and again in Monbijou park on the opposite river bank, from where they took it away in a
car.

The car that police say is the getaway vehicle was later confiscated during an illegal car race, reported Spiegel Online.

Unknown perpetrators at a later stage broke into a police car park and sprayed foam from a fire extinguisher inside the vehicle, possibly trying to obscure forensic traces.

However, a police team discovered gold particles inside the vehicle matching the purity of the Big Maple Leaf, according to prosecutors.

The suspects' Remmo family, whose patriarchs fled war-torn Lebanon in the 1980s, is considered by police and prosecutors to be one of Berlin's most notorious organized crime clans.

Police last year targeted the Remmos with the seizure of 77 properties worth a total of 9.3 million euros, charging that they were purchased with the proceeds of various crimes, including a 2014 bank robbery.

At the start of the trial, the head of German police union BDK, Sebastian Fiedler, said that “without doubt, clan criminality in all its facets is a prime example of completely failed integration”.

Speaking to Die Welt daily, he said that the extended families produce hardened criminals with total disregard for the rule of law who “don't accept the state under which they live”.

The three risk 12 years in prison if found guilty.

Aged 39 to 50, the trio are members of the separatist organisation ASMLA (Arab Struggle Movement for the Liberation of Ahvaz), which is based in Denmark and the Netherlands and which Iran considers a terrorist group.

The three, one of whom is a Danish citizen, have been held in custody in Denmark since February 2020.

Gert Dyrn, lawyer for the eldest of the three, told AFP that in his client’s opinion “what they are charged with is legitimate resistance towards an oppressive regime.”

“They are not denying receiving money from multiple sources, including Saudi Arabia, to help the movement and help them accomplish their political aim,” Dyrn said.

His client has lived as a refugee in Denmark since 2006.

According to the charge sheet seen by AFP, the three received around 30 million kroner (four million euros, $4.9 million) for ASMLA and its armed branch, through bank accounts in Austria and the United Arab Emirates.

The trio is also accused of spying on people and organisations in Denmark between 2012 and 2020 for Saudi intelligence.

Finally, they are also accused of promoting terrorism and “encouraging the activities of the terrorist movement Jaish Al-Adl, which has activities in Iran, by supporting them with advice, promotion, and coordinating attacks.”

The case dates back to 2018 when one of the three was the target of a foiled attack on Danish soil believed to be sponsored by the Iranian regime in retaliation for the killing of 24 people in Ahvaz, southwestern Iran, in September 2018.

Tehran formally denied the attack plan in Denmark, but a Danish court last year jailed a Norwegian-Iranian for seven years for his role in the plot.

That attack put Danish authorities on the trail of the trio’s ASMLA activities.

Sunni Saudi Arabia is the main rival in the Middle East of Shia Iran, and Tehran regularly accuses it, along with Israel and the United States, of supporting separatist groups.

Lawyer Gert Dyrn said this was “the first case in Denmark within terror law where you have to consider who is a terrorist and who is a freedom fighter.”