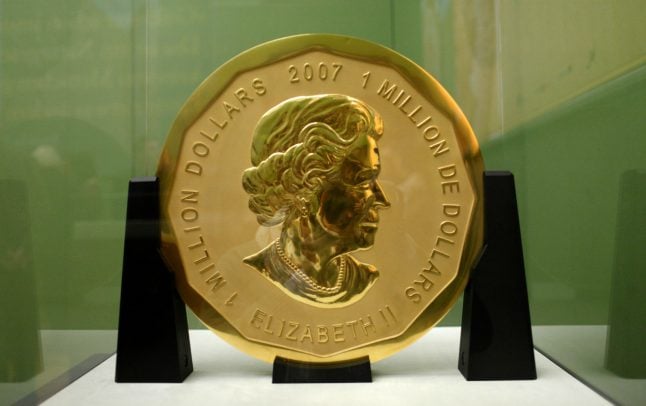 Police have found no trace of the 100-kilogramme Canadian coin since the elaborate late-night heist on March 27th 2017 from the German capital's Bode Museum, located close to Chancellor Angela Merkel's apartment.

Authorities presume the nearly pure-gold treasure, with a face value of one million Canadian dollars, “was either cut into small pieces or taken abroad”, said Berlin police at the time.

If found guilty of theft, they would face jail terms of up to 10 years. Also in the dock in the juvenile trial is a former museum security guard, 20-year-old Dennis W., who allegedly acted as the inside man, giving the others crucial information for the break-in.

The three alleged thieves, who are registered as unemployed, are not in custody.

Berlin's B.Z. daily and other German media reported they are members of the Remmo extended family with roots in Lebanon, several of whose members have been linked to organized crime.

The city's police last year targeted the Remmo clan with the seizure of 77 properties worth a total of €9.3 million, charging that they were purchased with the proceeds of various crimes, including a bank robbery. In this file photo auction house workers lift a copy of the Big Maple Leaf in Vienna, Austria. Photo: DPA

The “Big Maple Leaf”, minted in 2007 with a portrait of Queen Elizabeth II, is considered the world's second-largest gold coin. There are five copies of them in the world, plus the original.

It was on loan from an unidentified collector to the Bode Museum, which bills its large exhibition of coins and medals as a “chronicle of human history forged in metal”.

Security camera footage from the night shows three young men in dark hoodies make their way to the museum, following earlier trips they had made to scope out the target.

The thieves broke in through a window around 3.30 a.m. and used a rope, wooden beam and a wheelbarrow to lift the coin — which has a diameter of 53 centimetres – onto adjacent elevated urban railway tracks.

The coin was probably damaged when the thieves dropped it twice – once on the tracks that pass the museum and cross the Spree river, and again in Monbijou park on the opposite river bank, from where they took it away in a car.

According to the indictment, at a later stage, “the accused allegedly split the gold coin and sold the pieces”.

The 21-year-old suspect was detained in Berlin on Monday evening over what local media have dubbed one of the biggest museum heists in modern history, a spokesman for the police in the eastern city of Dresden said.

The twins had eluded German authorities when they carried out raids last month and arrested three members of the Remmo clan, a family of Arab origin notorious for its ties to organised crime.

Police then named them as 21-year-old Abdul Majed Remmo and Mohammed Remmo.

Police did not immediately name the arrested twin. His brother remains on the run.

READ ALSO: Everything you need to know about the Dresden museum heist

Having caused a partial power cut and broken in through a window, they snatched priceless 18th-century jewellery and other valuables from the collection of the Saxon ruler August the Strong.

Items stolen included a sword whose hilt is encrusted with nine large and 770 smaller diamonds, and a shoulderpiece which contains the famous 49-carat Dresden white diamond, Dresden's Royal Palace said.

The Remmos were previously implicated in another stunning museum robbery in the heart of Berlin in which a 100-kilogramme gold coin was stolen.

Investigators last year targeted the family with the seizure of 77 properties worth a total of €9.3 million, charging that they were purchased with the proceeds of various crimes, including a 2014 bank robbery.