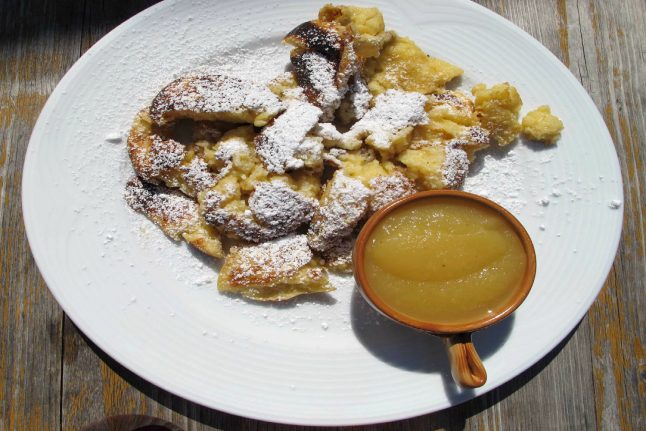 What is the festive season without delicious treats? It’s probably everyone’s favourite part of Christmas, from the Santas dipped in chocolate to the Marzipankartoffeln and the Stollen.

As a devotee of the humble pancake (I think it’s a solid meal choice that should be eaten at least once a week), I was intrigued to find out that this European variation of pancakes existed.

Well, reader, my dreams came true. On a pre-Christmas trip to the Altberliner Restaurant in Berlin with my Local Germany colleagues, I spotted the Kaiserschmarrn on the menu. Obviously I ordered it (our editor did too) and scoffed as much as I possibly could. It was one of my favourite food moments of the year. What's so special about the Kaiserschmarrn?

So let’s dissect the Kaiserschmarrn in a bit more detail: It comes from the word Schmarrn, a dish that's popular in Bavaria and Swabia in Germany, and Austria.

What’s special about the Schmarrn is that after the ingredients have been cooked together, it is cut into small bits and mixed up.

The Kaiserschmarrn is the most famous examples of this dish. It translates roughly to “the emperor’s mess”. There are endless tales about the origin of the recipe but most people agree that it’s connected to Emperor Franz Josef I, who was ruler of Austria from 1848 to 1916.

Some stories say the dish was originally cooked by a farmer’s wife who was visited by the Kaiser while he sheltered from bad weather during a trip to the Alps.

Another says it was invented by the Kaiser’s cook whose pancakes went awry and he styled it out in the most magnificent fashion by scrambling them up and serving a new creation.

I’ve no idea what to believe but I think the Kaiser must have liked these mushed up pancakes anyway. Who wouldn't?

There are plenty of recipes online and in cookbooks. Perhaps you even have a mouthwatering old family recipe, especially if you come from southern Germany or Austria, that's been handed down through the ages.

The main component of this delicious treat is a batter mix made using flour, eggs, sugar, salt and milk and then baked in butter. Sometimes raisins are added.

The pancake can be baked either in an oven or fried. It is split into pieces with two forks and usually sprinkled with powdered sugar and grilled to caramelize it.  It's mostly served with Zwetschkenröster (roasted plums) or Apfelmus (apple sauce), and sometimes other fruit compotes.

I really like this Kaiserschmarrn, can I have the recipe?

Let’s also not forget that Schmarrn is used in a colloquial way down in old Bavaria, and refers to silly talk. When someone is talking nonsense, and what they're saying is pointless chatter or gossip, it's Schmarrn. Someone who talks a lot of Schmarrn could be labeled as a Schmarrnbeppi.

Don't give me any of that rubbish.

He spoke for so long, but it was just rubbish coming out of his mouth. 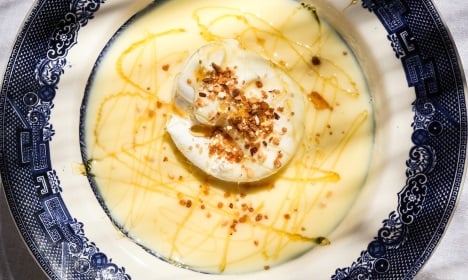 These step by step instructions, from France-based food blogger Laura Tobin, are easy to follow and should help you impress your friends with this tasty dessert.

For the Meringue:
• 2 egg whites (at room temperature)
• 115 grams of icing sugar
• Pinch of salt

You will also need a small amount of butter or light vegetable oil for coating.

2. In a bowl whisk the egg yolks with the sugar until the mixture turns a lighter colour and starts bubbling.

3. The crème anglaise has to cook at low heat, otherwise it curdles. The best way to achieve this is to cook it au bain-marie: not on direct heat but inside a pan full of water. You can use any small pan inside a larger pan, but make sure the small pan does not touch the bottom of the large pan otherwise the heat will be too strong. Be patient, pour the warm milk into the egg mix, keep the water simmering and stir the custard with a wooden spoon until it thickens. This can take up to 15 minutes.

Make sure the water in the pan does not boil vigorously, but just simmers away. If the heat is too high and the custard curdles, remove the pan from the heat and either strain the custard or mix it with a blender.

4. Once the custard has thickened, let it cool down completely, which you can do by immersing the pan into cold water. You can also cook the custard the day before and let it cool in the fridge overnight.

Making the meringues is not difficult as long as you follow these key rules strictly:

5. Using an electric mixer, whisk the egg whites at high speed until they become stiff.

6. Add half of the icing sugar and continue to whisk.

7. Once the mixture becomes firm combine the remaining icing sugar.

8. Butter four small but deep ceramic (or microwave resistant) cups and pour the egg white mix in equal amounts. Make sure there is enough room left at the top of the cups as the meringue will rise while cooking.

10. In a pan pour the sugar and the water and bring to boil at medium heat. With a thermometer keep measuring the temperature of the syrup, the caramel will be ready when it reaches 125 C. Don’t get distracted as the caramel, once it is formed, can burn within seconds.

11. Once the temperature is reached, immediately remove the caramel from the heat. Move the pan gently and not too far. Remember, too much shaking can re-crystallize the caramel.

12. Let it rest for a few seconds until the bubbling stops, but not too long otherwise it will solidify.

13. Oil four small bowls with a light vegetable oil or butter and whirl the caramel on the bowl with a spoon making swirls shapes. The caramel will solidify very quickly.

15.  Sprinkle with the praline and top the meringues with one of the caramel curls. You can also sprinkle the caramel directly onto the Île Flottante, like in the cover picture of the article. Serve and enjoy!


If you want to save or print the recipe you can find it here on Your Guardian Chef.