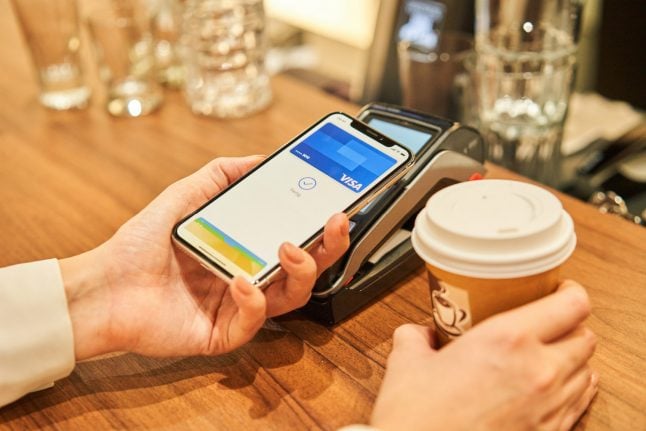 The move came four years after the launch of the iPhone payment service in the USA.

The company activated the function on Tuesday morning, which means people can pay in shops with the iPhone or Apple Watch in a similar way to using a contactless payment card.

To do this, users must hold the device to the terminal at the checkout. The checkout technology has to support contactless payment – around 820,000 terminals in Germany have already been retrofitted accordingly. In addition, you can use Apple Pay to pay for online purchases in a similar way to services such as PayPal.

Smartphone payment services are suddenly gaining momentum in cash-loving Germany, after years in which the Bundesrepublik lagged behind. In late June, Google launched Google Pay in Germany, while Sparkasse introduced its own homegrown rival to the US tech giants' contactless systems in August.

Customers can usually tell if a business accepts Google or Apple Pay due to a sticker logo near the cash desk. Others such as the savings and cooperative banks, which rely on their own payment apps, are not included in the Apple Pay system for the time being. They only offer contactless payment on smartphones with the Android operating system because they cannot access the NFC radio chip on iPhones.

The launch of Apple Pay in Germany was announced by Group CEO Tim Cook at the beginning of August. The service is currently available in 31 countries, including France, Switzerland and Spain.

Germany is known for its strong commitment to Bargeld (cash) in a world that is embracing cards and other forms of contactless technology.

Many restaurants and shops across the country still only accept cash payments and most Germans reportedly still prefer to pay in cash. According to finance experts Barkow Consulting, only about every twentieth payment in Germany is processed by credit card.

And, depending on the survey, only around 13 to 18 percent of people in Germany pay with their smartphone, reported Zeit on Tuesday.

But some people living in Germany took to social media to express their delight at Apple Pay launching in the country, with many simply saying: “Finally”.

A German user is happy to see Apple Pay launching.

Despite Germany being known as a cash country, it is becoming more equipped to deal with the launch of services like Apply Pay thanks to the conversion to terminals that support contactless payment.

Comdirect Bank, which has been offering the similarly functioning competitor service Google Pay since the summer, is satisfied with how it is received by customers.

My first #ApplePay payment in #Germany. Ever. ?? pic.twitter.com/eC0uwp1TBq

“More than half of registered customers at Google Pay use the service regularly – at least five times a month,” says bank boss Arno Walter.

At the same time, the service is used more frequently in stores than for online payments. “I believe that mobile payment will also establish itself in Germany, the country of cash,” says Walter confidently.

Over the past few months, it has become clear that Apple customers have been very much anticipating the iPhone payment service to be launched.

Comdirect Bank also plans to integrate the Girocard into Google Pay and Apple Pay, but it is a complex process.