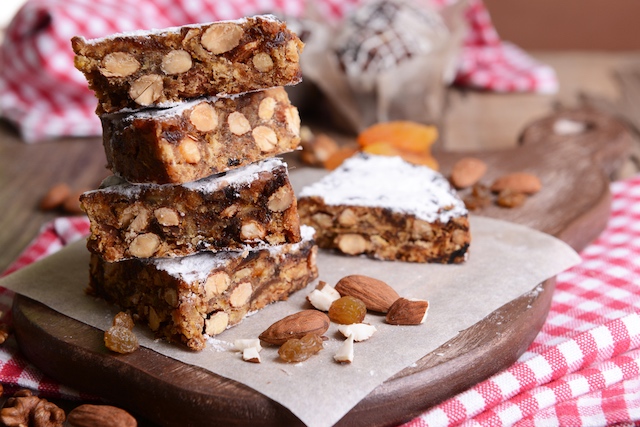 Panforte from Siena, just one of Italy's many regional Christmas specialities. Photo: DepositPhotos

In Milan it’s all about the panettone, literally 'pan de toni' or Toni’s bread. Legend has it that Toni was the kitchen hand at the court of Ludovic Sforza, Duke of Milan. He burnt the cakes for dinner so threw together a type of medieval spiced bread and presented it at court. The court loved it and the panettone was born. The origins of the pandoro ('pan d'oro' or golden bread) are, as is often the case, both religious and pagan. Some say its star shape refers to the star that led the Three Kings to Jesus. Others believe it refers to the sun, symbol of fertility. Today’s pandoro owes its height to 19th-century pastry chef Domenico Melegatti, who modified the original medieval recipe so the pandoro would rise better. A much older Veronese cake, the nadalin, is its rustic cousin.

The Christmas sweet leavened breads found across northern Italy often have peasant origins. The cresenzin is a rustic, heavier ancestor of panettone from the valleys of Piedmont. In Valtellina they have the bisciola, another dense cake made with sultanas, nuts and dried figs, while Bologna’s panone (big bread) is a sweet, dark loaf filled with dried fruit and occasionally chocolate. There are many variations of what is essentially the same cake. Go to Brescia and there’s the bossolà, called bussolano in Cremona and bisulan in Mantua. It’s a type of ciambella, or soft round cake with a hole in it. Some say it was brought by the Venetians, others believe it has Celtic origins and its shape reflects the good luck symbol of a twisted snake.

Go to Turin and their festive cake is the panettone basso, literally a short panettone. It’s covered with a hazelnut glaze – no surprise from an area that’s famous for its hazelnut pralines and nutty chocolate spreads. In Liguria there’s the pandolce genovese, a fruit bread that can be made tall and airy or flat and crumbly. Bice Comparato, 93, from Albenga on the Gulf of Genoa, recalls how “we used to collect grapes from the vegetable garden and dry them, and my mother would use these in the pandolce. We’d also collect figs that we’d dry out on netting and conserve them in fresh fig leaves that we’d sew up. At Christmas you’d open them and inside there was the dried fig.”

The pine nuts that feature in Genovese pesto also feature in its Christmas cake. “The pine nut is the pine nut. It turns up everywhere,” Bice’s daughter, Brunella Parodi, tells me. In Tuscany, Simona Casucci, 45, from Arezzo, tells me she grew up eating “the traditional sweets such as ricciarelli and cavallucci biscuits”, made with almonds and typically served with dessert wine, or dried fruit. “People still have this nowadays, although obviously you can get anything you want now.”

Siena has its panforte, a spicy, chewy cake of fruit, nuts and honey. Rome has its pangiallo, an Ancient Roman ancestor, while Ferrara has pampapato, a chocolate-covered version first made by 17th-century monks at the Monastero del Corpus Domini and considered a dessert 'fit for a pope'. In Puglia, the emphasis is on the biscuits. Giuseppina Maiorano, 85, from Lizzano in the province of Taranto, tells me they’d start making them after the Feast of the Immaculate Conception on December 8th.

“There were almond biscuits, ones with wine, and ones with oil and pepper are delicious. And we’d make pettole, fried pieces of dough with honey, and purcidduzzi, little balls of dough that were fried and then dipped in honey. We’d start eating at lunchtime on Christmas Eve – usually pasta with baccalà – and carry on until about ten in the evening.

“We used to put all the biscuits out on the table and then we’d eat as we played cards and tombola. Then we’d go to mass and it was a huge party because Jesus had been born.” Tina Di Staso, 58, from Foggia, grew up in the small town of Trinitapoli. “Christmas begins the night before the Feast of the Immaculate Conception on December 8th. There’s always a bonfire near the churches in honour of the Madonna and the older women make frittelle, a bit like panzerotti [fried turnovers], only with flour and yeast.”

How many of Italy's baking traditions survive today? Di Staso says: “My grandmother and mother did more than I do. I work so I make less.” Yet the picture-postcard Italy that so many like to imagine, a tableau of women in aprons cooking together, has a perennial appeal. The reality was often poverty and hardship, but also a sense of community.

“The biscuits were there for anyone who used to come to the house,” Giuseppina tells me. “We’d take things to our neighbours, and they’d bring them to us.”

READ ALSO: The food and drink you need for an Italian Christmas feast