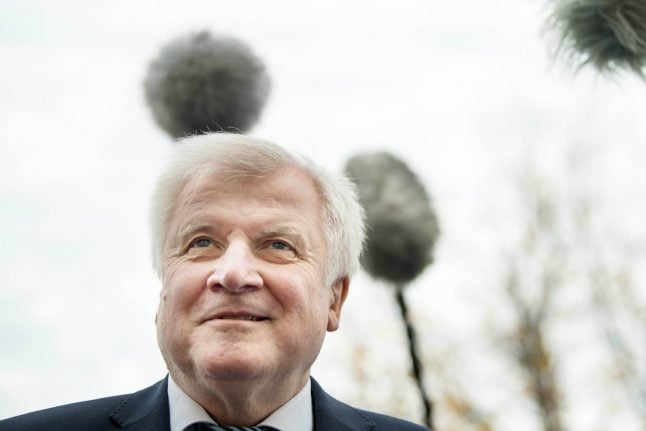 Since the CSU suffered historic losses in the Bavaria elections last month, there's been speculation on the 69-year-old's future in politics.

Speaking to reporters in Bautzen, Saxony, on Monday Seehofer confirmed his decision to quit as head of CSU, which he has led since 2008.

“I will resign as party leader – this decision has been made”, he said, reported Zeit Online.

However, he denied a planned resignation from his role as Interior Ministry before his term ends in 2021, which some German publications had been speculating on.

On Sunday evening, Seehofer had informed top CSU leaders of his decision. The information was leaked to the press shortly after.

German media reported that he would step down at the beginning of 2019 and that a new leader would be elected at a special party conference.

However, Seehofer said that the timeline of his resignation as CSU leader had not yet been determined. A decision and statement will be released this week.

After he leaves, it's most likely that Bavaria's Prime Minister Markus Söder will take the top spot in the CSU party.

Seehofer's resignation is not a huge surprise. He's been facing mounting pressure from party members to quit since the disastrous election results achieved by the CSU in the state elections in Bavaria on October 14th.

The CSU is now dependent on the Free Voters as coalition partners after losing its absolute majority.

But there's more. Seehofer tried out some risky tactics recently, including threatening to quit if Germany didn't take a tougher stance on migrants and refugees.

Although he hoped it would win back right-wing voters who had drifted away from the party in the direction of Alternative for Germany (AfD), he was criticized for endangering the coalition and making Germany unstable.

SEE ALSO: Analysis – Is one man about to collapse German politics as we know it?

Meanwhile, the case of Hans-Georg Maaßen, the former head of Germany's domestic security intelligence agency, has also been a thorn in the side of Seehofer.

The CSU leader stood by Maaßen after he gave an interview to a newspaper, contradicting Angela Merkel and the government.

After Maaßen was sacked and controversially promoted, a deal was eventually reached where the domestic intelligence specialist would become an adviser in the Interior Ministry office.

But after Maaßen's farewell speech, in which he took aim at the government, came to light, he lost the role that Seehofer had found for him.

The whole debacle caused some damage to Seehofer's reputation.

SEE ALSO: Why Germany's controversial spy chief is finally being pushed out

The debate over Seehofer's future was further fuelled – and his resignation likely accelerated – by Chancellor Angela Merkel's announcement that she would hand over the CDU chairmanship in December.

Many commentators believed it was high time that Seehofer gave up his power too.

DPA reported that almost all CSU district chairmen spoke of a devastating mood at grassroots level at the internal CSU meeting on Sunday
It's clear party members think it's time for change.
Meanwhile, Seehofer is facing calls from political opponents to quit immediately, rather than on his terms.

The Greens in the Bundestag demanded his immediate resignation from the Interior Ministry. “Every day that Horst Seehofer remains Interior Minister is one day too many,”  faction leader Katrin Göring-Eckardt told the Tagesspiegel on Monday.

SEE ALSO: The end of an era: What you need to know about Merkel's planned departure

Europe is struggling with historically high energy prices as it faces an early autumn cold snap and a coming winter almost certainly to be endured without crucial Russian gas supplies because of the war in Ukraine.

Many EU countries have announced national programmes to shield consumers from the high prices. But Germany went the furthest on Friday when it announced its mammoth plan, which will see help pouring to Germans for two years.

Arriving to talk with his eurozone counterparts, German Finance Minister Christian Lindner insisted the spending was “proportionate” to the size of Germany’s economy and said his goal was to use as little of the money as possible.

But Germany’s largesse rankled several EU capitals, some of which feared their industries could take severe blows while Germany’s sits protected, deforming the EU’s single market.

Outgoing Italian prime minister Mario Draghi has slammed Berlin for its lack of solidarity and coordination with EU partners.

French Finance Minister Bruno Le Maire, without directly criticizing Berlin, called on partners to agree a common strategy against the price shock and for countries to refrain from going it alone.

“The more this strategy is coordinated, united, the better it is for all of us,” he said.

Others pointed to the unprecedented solidarity shown in the Covid-19 crisis in which the 27 EU nations, against all expectations, approved a jointly financed €750 billion recovery plan.

“Solidarity is not only on the German shoulders, I think this is something that we have to deliver at European level,” said EU economics affairs commissioner Paolo Gentiloni.

“We have very good examples from the previous crisis on how solidarity can react to a crisis and also reassure financial markets. I think that this is our goal,” he said.

While a Covid-style recovery plan is not in the cards for now, Le Maire said €200 billion in loans and €20 billion in aid should be devoted to REPowerEU, a programme to help countries break their dependence on Russian gas.

READ ALSO: Will Germany set a gas price cap – and how would it work?

Bruegel, a highly influential think tank in Brussels, called the German plan a spending “bazooka” that many EU countries were unable to match, creating a potential source of animosity.

“If the German gas price brake gives German business a much better chance to survive the crisis than, say, Italian business, economic divergences in the EU could be deepened, and European unity on Russia undermined,” it said in a blog.