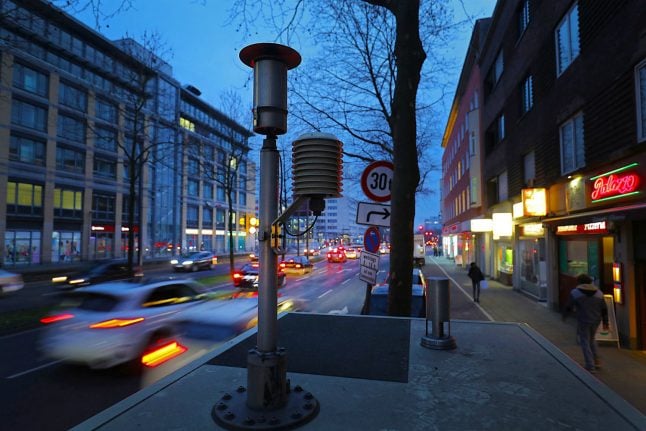 Cologne is one of the cities to be slapped with a diesel ban. Photo: DPA

The Cologne administrative court said Cologne must ban the dirtiest diesels from its centre and other streets from April 2019 to tackle dangerously high levels of nitrogen dioxide (NO2) emissions.

In the smaller city of Bonn, the restrictions would apply to only two streets.

The ruling, which can be appealed, is the latest victory for German environmental group DUH which has launched a raft of court cases to force local authorities to boost air quality.

Major urban areas including Stuttgart, Frankfurt and the capital Berlin have already been slapped with legal orders to cut emissions, while Hamburg decided of its own accord to expel the worst polluters from some zones.

Faced with mounting public anger, Chancellor Angela Merkel's government is scrambling to ward off the unpopular driving bans that promise to not only cause transport upheaval but further hammer the resale value of diesels.

Diesel engines have come under intense scrutiny since Volkswagen admitted in 2015 to installing cheating software in millions of cars to dupe emissions tests.

The scam made the cars seem far less polluting in labs than they were on the road, and suspicions of similar trickery have since spread to other carmakers as well.

But the country's mighty car giants have been stubborn in their refusal to foot the bill for cleaning up diesels in order to bring them into compliance with EU law.

But carmakers have so far responded mainly by offering software upgrades for newer diesels and trade-in bonuses — which would still leave drivers shelling out thousands for new cars.

Law could exempt cities from bans

Merkel is also backing a proposed law that would exempt cities from diesel bans when only “minor” infractions against legal pollution limits have been registered.

A total of 65 German cities last year recorded NO2 levels that surpassed European norms of 40 microgrammes per cubic metre of air.

In Cologne, the level spiked to 62 microgrammes while Bonn peaked at 47.

Nitrogen oxides (NOx) including NO2 are estimated to cause thousands of premature deaths in Germany each year.

According to the World Health Organization (WHO), the gases aggravate asthma and bronchitis symptoms and are linked to cardiovascular and respiratory disease.

CARS
Revealed: More than half of new cars in Norway are electric

The number of farm animals raised in Spain has jumped by more than a third since 2015 to around 560 million in 2020, it said in the report entitled “Mega farms, poison for rural Spain”.

This “excessive and uncontrolled expansion of industrial animal farming” has had a “serious impact on water pollution from nitrates”, it said.

Three-quarters of Spain’s water tables have seen pollution from nitrates increase between 2016 and 2019, the report said citing Spanish government figures.

Nearly 29 percent of the country’s water tables had more than the amount of nitrate considered safe for drinking, according to a survey carried out by Greenpeace across Spain between April and September.

The environmental group said the government was not doing enough.

It pointed out that the amount of land deemed an “area vulnerable to nitrates” has risen to 12 million hectares in 2021, or 24 percent of Spain’s land mass, from around eight million hectares a decade ago, yet industrial farming has continued to grow.

“It is paradoxical to declare more and more areas vulnerable to nitrates”, but at the same time allow a “disproportionate rise” in the number of livestock on farms, Greenpeace said.

Pollution from hundreds of intensive pig farms played a major role in the collapse of one of Europe’s largest saltwater lagoons, the Mar Menor in Spain’s southeast, according to a media investigation published earlier this week.

Scientists blamed decades of nitrate-laden runoffs for triggering vast blooms of algae that had depleted the water of the lagoon of oxygen, leaving fish suffocating underwater.

Two environmental groups submitted a formal complaint in early October to the European Union over Spain’s failure to protect the lagoon.