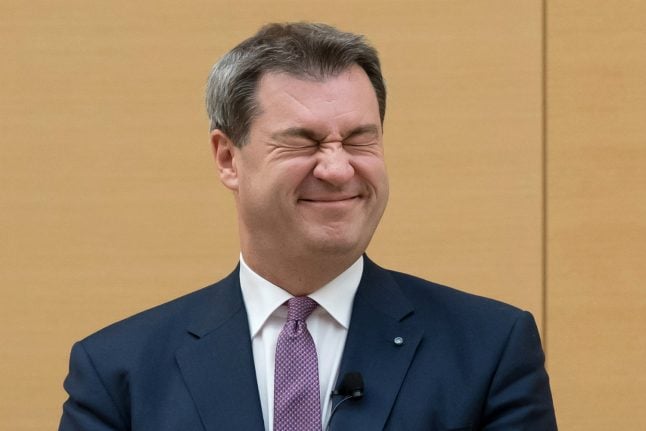 
Just over three weeks ago, the Christian Socialists (CSU) suffered major losses in the Bavarian state election. Now they've formed a new coalition, with a familiar face at the helm. Can they stay afloat?

Grinning in parliament, Markus Söder looked delighted as he was sworn in as the state premier of Bavaria after being re-elected by a majority on Tuesday.

The CSU politician, 51, received 110 votes in favour and 89 votes against him, with three abstentions in the secret ballot.

But behind the smiles, it's been an unsettling time for the sister party of Angela Merkel's Christian Democrats (CDU), after it achieved its worst result since the 1950s. The conservative CSU, which only exists in the southern Germany state, dropped 10 percentage points to achieve 37.2 percent of the vote in the election held on October 14th.

Add to that the uninspiring results of the centre right CDU in Hesse, and the fact that Merkel has announced she's stepping down as head of the party in December, it's fair to say the Union isn't having a great time of it.

Another complication for the CSU is party leader Horst Seehofer. With no sign of him handing in his resignation – even after he controversially backed the former head of Germany's domestic intelligence agency, Hans-Georg Maaßen which almost brought down the government in Berlin – it remains to be seen if and how the party can win back the trust of voters.

Can the CSU turn things around?

Yet a new chapter is beginning in Bavaria as the CSU embarks in a coalition with grassroots party, the Free Voters, led by Hubert Aiwanger – and Söder is determined to turn things around. Although the parties have differences, both lean to the right and so are a good match.

In fact, a partner without the baggage associated with mainstream parties could be just what the CSU needs right now as Söder tries to carve out a fresh start.

On Tuesday, he appealed to all parliamentarians to “develop a new style”, reports DPA, emphasizing that decency was important, and everyone should make more of an effort to understand each other's arguments.

Perhaps Söder's statement was a bid to distance himself from the bickering that's engulfed German politics in recent months in the federal government, whether it's over refugee and immigration policies, the future of the grand coalition, or a civil servant like Maaßen.

“The fight for the best makes parliamentarianism strong,” said Söder, to show that he was dedicated to the people of Bavaria.

SEE MORE: Why there was no political earthquake in Bavaria – but Germany is still shaking things up

How can the government live up to this? The aim is to increase Bavaria's prosperity and avert damage after the vote. This also includes being more optimistic and not focusing only on problems.

Söder will be judged on how he succeeds in strengthening the cohesion of society and shaping the future of the southern German state.

The CSU and Free Voters signed their coalition agreement on Monday, with Söder calling it “an historic day”.

The group signed the 60-page treaty only a few hours before the first session of the new state parliament.

Free Voters chairman Aiwanger, who appears to be over the moon to be in coalition in the state, tweeted on Monday: “First session today in Bavarian parliament. The sky is Bayern blue and orange. Long live Bavaria!”

The new state parliament consists of six parliamentary groups and 205 delegates. Söder's re-election comes after he became minister president for the first time in March when he took over from Seehofer, who moved to Berlin as federal Interior Minister.

During the first debate, CSU faction leader Thomas Kreuzer echoed Söder as he called on all parties to work together constructively. The voters in Bavaria would now expect some action, was the message. 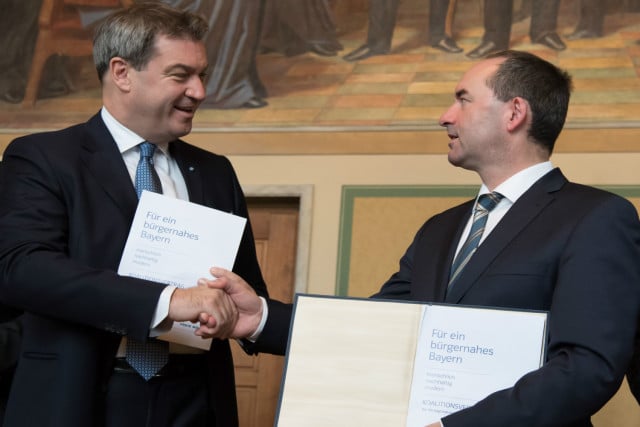 Markus Söder  (CSU) and Hubert Aiwanger of the Free Voters on Monday. They're now in a coalition. Photo: DPA

“They do not expect us to continue the election campaign under any circumstances,” said Kreuzer.

But despite the plea, there were a lot of lively moments. The second strongest force and largest opposition in Bavaria is the centre left Green party, who won 17.5 percent of the vote. Green faction leader Katharina Schulze said  the new Bavarian parliament set-up was “not enchanting at all”.

SEE MORE: The winners and losers – 7 things you need to know about the Bavaria election

“We have a shift to the right, not only in society, but also in parliament,” she said with a nod to the right wing AfD who entered Bavarian parliament for the first time, securing 10.2 percent of the vote.

“Stop fighting patriotism and the Germans' need for national identification, and equating it with racism,” she said.

Ebner-Steiner urged the other factions to take the AfD seriously and not reject all the party's motions in principle. If this does happen “they can expect constructive opposition,” she said.

Social Democrats (SPD) faction leader Horst Arnold raised concerns that very little would change in Bavaria, despite the election results that signalled a need for change.

He said the coalition was not a project for a new beginning but instead it signalled a “lack of prospects”. Meanwhile, the pro-business Free Democrats (FDP) faction leader Martin Hagen also said that “Bavaria needs an update”.

“It is a coalition of a new beginning,” he said. “They are forming a stable government and will take Bavaria forward.”

Meanwhile, the state parliament has another important stage ahead of it: on November 12th, Söder's ministers and state secretaries are to be appointed and sworn in.

The ministries of economy, environment and culture will be given to the Free Voters to take charge of, and the cabinet will be sworn in the following Monday.

As the southern state bids to distance itself from Berlin and its sister party, it's clear Bavaria is at least trying to get on with business.

But if Söder things he can do it without any fireworks or obstacles he's wrong: due to the lively mix in parliament, Bavaria is set for a rocky road ahead. At least it won't be boring. 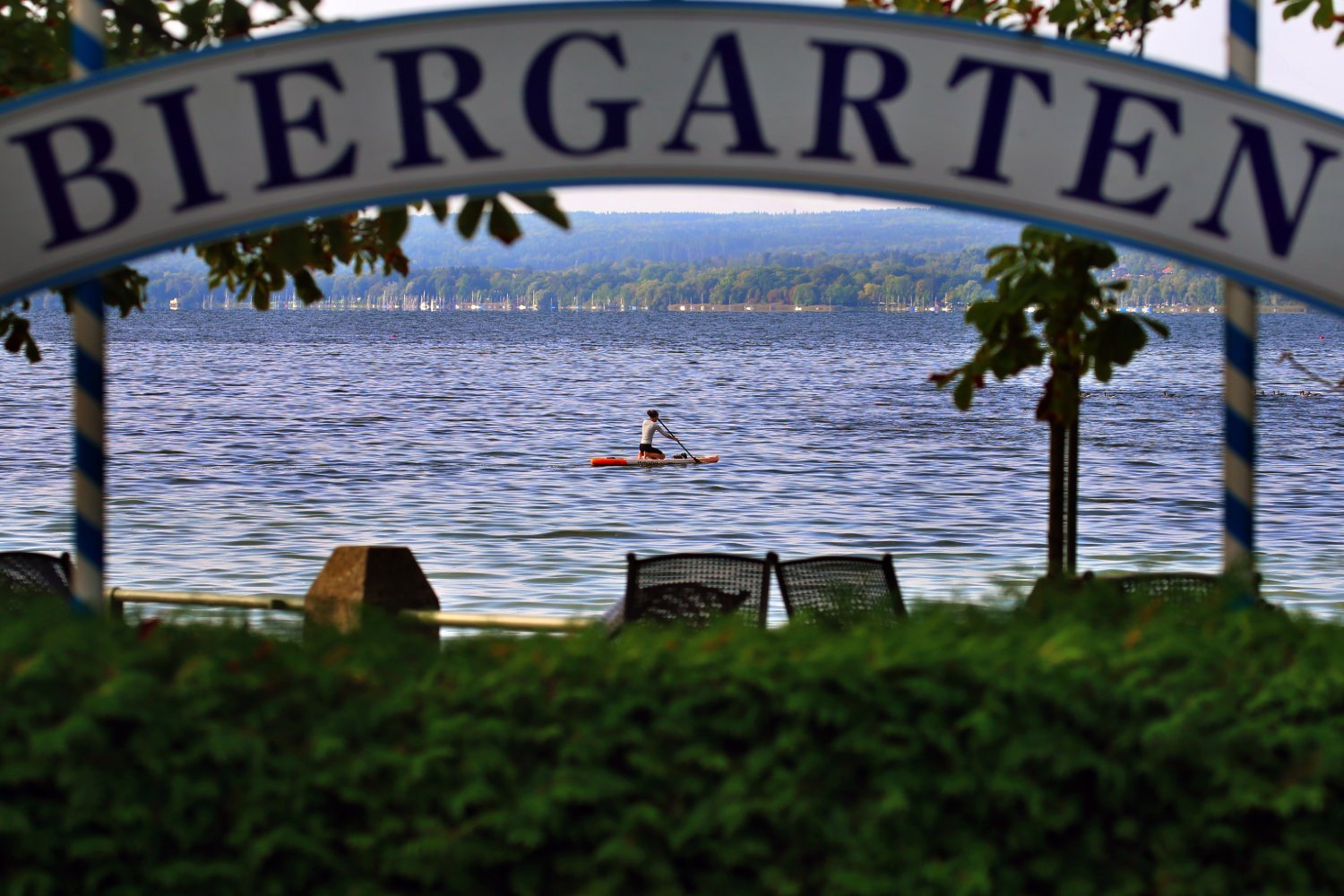 EXPLAINED: How Bavaria plans to reopen after Covid shutdown 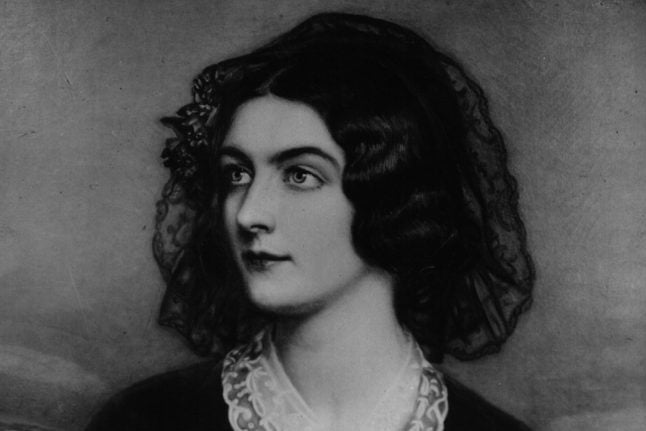 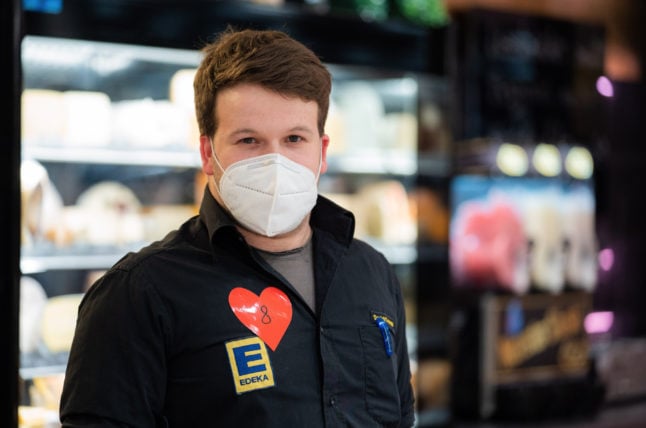 How a Bavarian supermarket is helping shoppers find love amid shutdown

EXPLAINED: What you need to know about Bavaria’s new FFP2 mask requirement 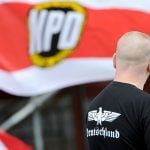