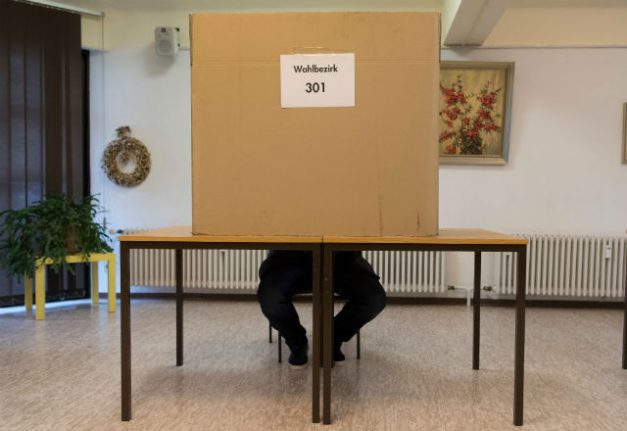 A man casts his vote in the town of Giessen. Photo: Boris Roessler / dpa
Berlin has held its breath since Bavarians punished Merkel's allies — the conservative Christian Social Union (CSU) and centre-left Social Democrats (SPD) — in a state poll earlier this month.
Aiming to damp down infighting that has driven voters from the traditional big parties, leaders urged discipline before polls opened at 8:00 am (0700 GMT) for 4.4 million voters in Hesse state — just seven percent of the national electorate.
“Hesse votes, Berlin trembles,” headlined daily Süddeutsche Zeitung. “The chancellor has never been under so much pressure.”
A bad outcome for either Merkel's Christian Democratic Union (CDU) or SPD will uncork a fresh round of finger-pointing and calls to abandon the veteran chancellor's third loveless right-left “grand coalition”.
Most in Hesse are relatively content with their regional government, meaning “there would be no mood pointing towards change among Hessian voters without the intent to send a signal to Berlin,” weekly Welt am Sonntag commented.
The first signs of the fallout for Merkel will come at 6:00 pm (1700 GMT) as ballot boxes are closed and the first exit polls published.
Newspaper Frankfurter Rundschau reported that by midday, turnout in many districts was around the same level or lower than at the last election in 2013.
Heavy losses
Surveys point to both CDU state premier and loyal Merkel follower Volker Bouffier and his SPD challenger Thorsten Schäfer-Gümbel suffering heavy losses compared with 2013. Both parties stand to shed around 10 points, for results in the high 20s for the CDU and around 20 percent for the SPD.
Depending how other parties perform, coalition arithmetic could still allow either to lead a new state government — handing Merkel or SPD leader Andrea Nahles a symbolic victory.
Electoral momentum is on the side of newer parties, the far-right, anti-immigrant Alternative for Germany and the left-leaning ecologist Greens.
The AfD has entered 15 of Germany's 16 state parliaments as well as the federal Bundestag, propelled by a backlash to Merkel's migration policy. The protest party is expected to eat into both the CDU and SPD's vote to enter the Hessian legislature with a low double-digit share.
Meanwhile, the Greens — already the junior government partner in Hesse — look poised to almost double their 2013 vote share to around 20 percent. The party attracts voters who favour welcoming refugees, worry about climate change or are fed up with indulgence towards car companies during a years-long scandal over harmful emissions from diesel vehicles.
Hessian Greens leader Tarek al-Wazir predicted his party would also benefit from disappointment over quarrels that have rocked Merkel's coalition in recent months, mostly over the AfD's core issue of immigration.
While the CDU/CSU have been “wrapped up in themselves,” al-Wazir said, “we have never allowed ourselves to be driven crazy by the AfD's attacks”.
'No 100-percent certainty'
With tensions high in the Berlin coalition, “no-one can say with 100 percent certainty how stable things will stay, what kind of dynamics will emerge” after the election, CDU general secretary Annegret Kramp-Karrenbauer said Thursday.
Kramp-Karrenbauer — seen by many as Merkel's anointed successor — also cautioned that “if the government falls apart now, it will result in new elections,” a barely concealed warning to would-be coalition breakers in both the CDU and SPD.
As polls stand, the two parties would each book an even worse result than the all-time low scores they saw in last year's federal parliament vote.
Finance minister and SPD hopeful for chancellor Olaf Scholz tried to ward off calls to quit the coalition from within his own party Sunday, saying “we can't look tactical. Everything we do must be straightforward.”
As to whether Merkel could even be toppled, Scholz said “I'm not Mrs Merkel's spokesman, but… she has told the public that she was elected for the whole parliament” of four years.
Short of an end to the coalition, internal frustration in the CDU could instead bubble up in a weak score for Merkel when she stands for re-election as party leader in December — or even a surprise victory for a challenger.