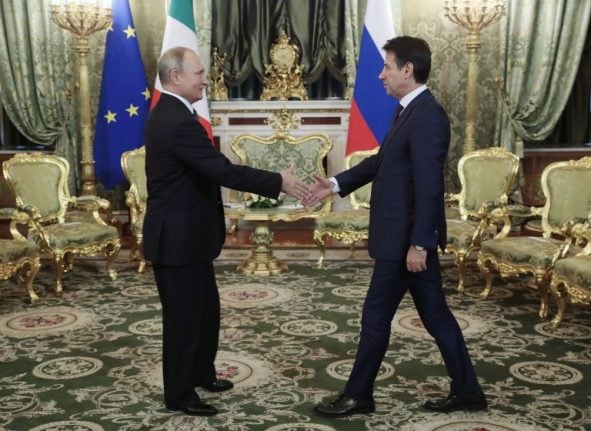 Meanwhile, his government in Rome is battling Brussels over the controversial big-spending budget plan expected to plunge the Italian economy further into debt.

“Let's be certain that the fundamentals of our economy are strong, our economy is robust and we only need to go forward. The government will do its part” to help businesses, Conte told an Italian-Russian business council in Moscow.

“We're the second manufacturing power in Europe, we're probably the country which has the strongest fabric of micro and small businesses, and we're proud of this,” he said.

The prime minister, who visits Russia just days after his interior minister Matteo Salvini made the trip, also met President Vladimir Putin today and invited him to visit Italy. “We have a great team — the government, the institutions, the businessmen, the workers. We have to play as a team,” Conte said.

In defence of the budget, he said Italy should “hold all the cards to free its potential.”

“In the (2019) budget, we pay attention also to the decrease of taxes, because we take into account that cost of labour in Italy has increased over time and weighs on our competitiveness,” he said.

The Italian government yesterday said it won't be making any modification to its budget despite the rejection of the document by the European Commission; an unprecedented move in the history of the European Union.

“They would want us to cut the funds for health, for disability, for the right to education,” he told Italian radio station RTL.

“There's no way. If they continue inflicting random blows, it makes me want to give the Italian people more money.”