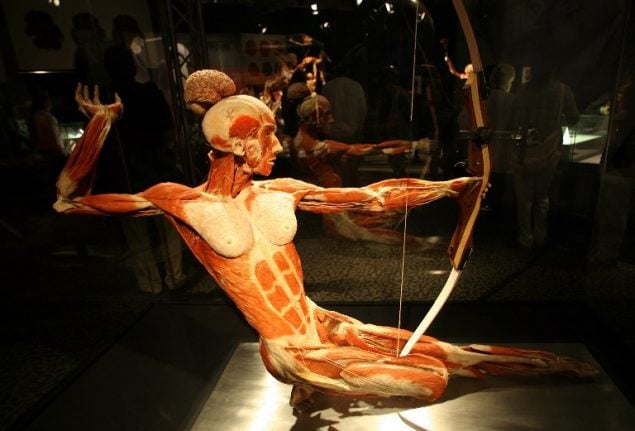 The cancellation of the 'Real Human Bodies' display — already shown in the Netherlands, Belgium and the Swiss capital Bern — followed a complaint by the Action by Christians Against Torture group (ACAT), the city authorities said in a statement.

According to an ACAT statement “the bodies used in this exhibition are very
probably those of Chinese prisoners who were tortured or executed and members
of the Falun Gong movement which is banned in China.”

Bern authorities asked the exhibition's organisers to provide guarantees on the provenance of the bodies used in their displays, along with written consent forms from the deceased or their relatives.

Without such proof the authorities refused to authorise the show, which had been scheduled for October 19-21 in a central Lausanne convention centre.

The 'Real Human Bodies' exhibition uses the technique of plastination, which allows body tissue and organs to be displayed and preserved.

It had already sparked controversy when it opened in Bern, but the Swiss branch of ACAT was unable to prevent that show from taking place.

According to the regional '24 heures' newspaper, the man in charge of the exhibition in Switzerland, Hubert Huppertz, says he has the necessary paperwork for the show to go ahead.

It's not the first time that a human bodies exhibition has raised controversy in the country. Last year in Geneva the “Body Worlds” show, put on by German anatomist Gunther von Hagens, raised some hackles but still went ahead.

The travelling show is currently open in London.