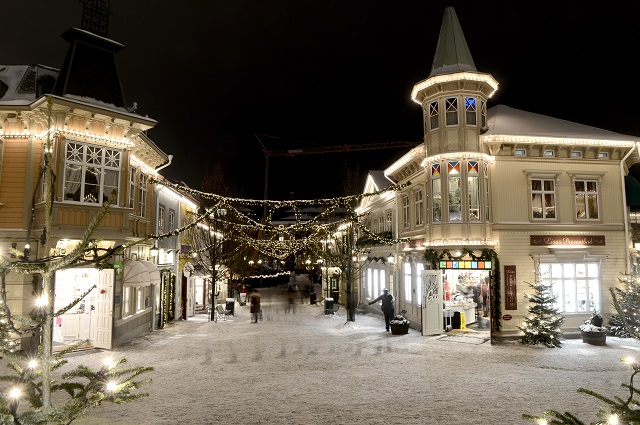 The O Helga Natt (Oh, Holy Night) event in Örebro, central Sweden, is the country's biggest open air Christmas concert. It has been held since 2001 and broadcast on TV for ten years, but won't be broadcast this year and it's unclear if it will be held at all.

One extremist far-right website reported that the disruption to the event was “likely” to be an example of “Swedish traditions being suppressed in order not to offend migrants who don't hold Christian beliefs”, without providing any evidence for this claim.

The column was written under the name 'Emma R' and published on the alt-right website Voice of Europe, before spreading to other far-right sites including the Geller Report and on the alt-right Peter Sweden Twitter account.

It cited SVT Nyheter Örebro, which published a short article last week about the decision not to broadcast the concert. The article stated that it was unclear whether the event itself would still take place, contrary to Voice of Europe's article which stated the concert had already been “cancelled”.

“TV4 is not broadcasting O Helga Natt this year,” executive producer Karin Dofs confirmed to The Local in a written comment. “Because it isn't certain that the concert will be staged, we cannot plan for a TV broadcast either.”

“It is sad that we're losing such a great and long-standing Christmas tradition, but we hope to be able to show O Helga Natt next year again,” Dofs added.

“We deal with untrue news being spread by answering questions we get with transparency. The reason why we decided not to broadcast the event is that there are uncertainties about whether the event will actually take place. These uncertainties have nothing to do with the untruths that have appeared in various forums,” she said, when asked how TV4 reacted to the false reports.

READ ALSO: How a minor traffic incident was reported as 'horror' by international media

As for the uncertainty over whether the concert will take place, there are a few contributing factors, none of them apparently relating to religion. Firstly, it's important to note that the concert has not been cancelled by “Sweden”, as stated on the far-right sites, but rather removed from the programming schedule of one TV channel, TV4.

In September, Örebrokompaniet – the marketing company for Örebro municipality – announced that it was withdrawing its offer to be a partner of the event and its support of 900,000 kronor. The reason given was that the company organizing the event, Ambitiös, had failed to put forward a detailed budget or event plan.

“We are not able to wait any longer for information because we need to move on in our planning before Christmas. We are commissioned by the municipality of Örebro to conduct a larger event for Örebro residents over Christmas and so we need to have enough time to find ways to use these resources in another way. Therefore, we are now withdrawing the offer,” Christer Wilén, CEO of Örebrokompaniet, said in a statement in late September, adding that it was up to Ambitiös, the event's organizers, to let residents know if the event would go ahead. The Local has contacted Wilén for comment.

Ambitiös took over organization of O Helga Natt after the company previously responsible went bankrupt in 2016, and was acquired by Ambitiös. Davor Dundic, CEO and owner of the latter company, said the strong brand and popularity of O Helga Natt was one of the main reasons for the acquisition, and Dundic was earlier this year nominated for an award as 'Örebro resident of the year' for his role in rescuing the free concert.

When The Local contacted Ambitiös, we were told no one in the office was available to speak about O Helga Natt and to send an email, which at the time of publication had not received a response. The website for the concert has not been updated since February 2018, and still lists the details for the 2017 event, while several long-term past collaborators, including a producer and director, told SVT that they have also been unable to find up-to-date information on the event's status.

In its headline, Voice of Europe wrote: “Sweden cancels traditional Christmas concert and increases promotions for Islamic events”, implying that funds and time slots set aside for traditional Christmas festivities were being diverted to Islamic cultural events. In fact, Örebrokompaniet has said it still plans to spend the money it had allocated to O Helga Natt on another large-scale Christmas event for the community.

The Netherlands-based website describes itself as a “conservative news network” but most articles have a strong anti-migrant and anti-Islam bias.

The article about O Helga Natt concluded with a statement calling on readers to “start speaking up and to stop accepting the destruction of our culture, counties (sic) and continent NOW”, in a thinly veiled attempt to appeal to far-right, anti-immigration or anti-Muslim sympathizers.

Journalism professor Christian Christensen highlighted the impact of presenting biased takes on news in order to appeal to certain groups in a tweet:

Now, which headline will get clicks….?

“Organizers of one local Christmas concert fail to provide city with budget, calling event into question”

It's not the first time that Sweden's local Christmas festivities have been falsely reported abroad.

In 2016, extremist fake news rights reported that the Scandinavian country had issued a ban on Christmas lights for religious reasons and particularly to avoid offending Muslims. The reports came as a surprise to anyone who was actually in Christmas for the festive season, where cities and towns were covered, as usual, in sparkly lights and other festive decorations.

As with the O Helga Natt reports, that story started with a grain of truth. Transport administration Trafikverket had announced that councils wishing to hang lights on state-owned lampposts had to apply for permission, both for legal and health safety reasons.