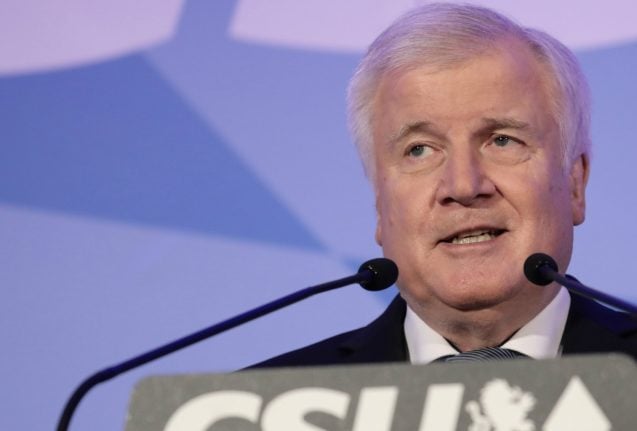 Seehofer speaking at the CSU HQ in Munich after the vote. Photo: DPA

The Christian Social Union (CSU) from Merkel's conservative camp took a 10-point dive in Sunday's vote to lose its absolute majority in the Alpine state it has ruled since the 1960s.

And the other coalition partner, the centre-left Social Democrats (SPD), dropped below 10 percent, halving their support in their worst ever result in any state poll.

The biggest winner was the Greens, who surged to become the second  strongest party with 18 percent, while the far-right Alternative for Germany (AfD) celebrated its entry into the state assembly with 10 percent.

The Süddeutsche daily commented that Merkel's alliance faces “a fight for its survival”, following the dramatic losses of the “so-called people's parties” as big-tent political groupings are known in Germany.

Spiegel Online commented that although “the epicentre of the political earthquake was in Bavaria … the tidal wave could sweep away the federal government”.

The punishing results for the CSU and SPD were widely seen as a rejection of months of ugly infighting, mostly about immigration, between the parties in Merkel's uneasy left-right “grand coalition”.

The CSU's Interior Minister Horst Seehofer has harshly criticized Merkel and the labour party SPD over their more liberal stance on immigration, repeatedly bringing their fragile alliance to the brink of collapse.

The battles this summer, one centred on securing German borders against asylum seekers, have distracted Merkel's fourth-term government which took  half a year to cobble together after inconclusive September 2017 elections.

On Monday, all major parties were due to discuss lessons learnt ahead of  another poll in Hesse state, home to financial hub Frankfurt, in two weeks.

The repercussions are crucial for Merkel who, in power for 13 years, runs again as party chief of her Christian Democratic Union (CDU) in December.

The Süddeutsche said that, following what it labelled a new milestone in the decline of German mainstream parties, the coalition now has a stark choice: a return to “common sense, or new elections”.

The Bavaria poll result shattered old certainties for the CSU, which has ruled almost single-handedly since the 1960s in the state known for its fairytale castles, Oktoberfest and crucifixes on classroom walls.

It must now scramble for coalition allies and is leaning toward the conservative Free Voters who won 11 percent.

State premier Markus Söder, 51, conceded the result was “painful”, and  Seehofer said “it was not a nice day for us” while insisting he would stay on as interior minister.

The CDU's general secretary Annegret Kramp-Karrenbauer said the “bitter” losses “must serve as a warning” for the CDU ahead of the October 28 Hesse election where Merkel ally Volker Bouffier will fight to stay on as premier.

The SPD's deputy leader Ralf Stegner told Phoenix TV that “the citizens delivered a resounding slap” to the governing parties and that, unless they change, “the grand coalition won't last much longer”.

The AfD's Alice Weidel, meanwhile, jubilantly declared that Merkel's government “is not a grand coalition but a mini coalition” and demanded she “clear the way for new elections”.

The AfD has risen since Germany's mass migrant influx of 2015, which also  saw the CSU harden its folksy brand of beerhall politics with increasingly aggressive anti-immigration and law and order positions.

The poll result showed that the tactic backfired: Bavarian voters most worried about immigration chose the AfD, while those turned off by the harsh new tone drifted to the Greens whose motto was “heart, not hate”.

The party became the strongest force in the state capital Munich, where jubilant Greens leaders Ludwig Hartmann and national co-chief Robert Habeck celebrated Sunday by crowd-surfing in a sea of cheering supporters.

The state election echoed the national mood, where support for the CDU-CSU union dropped to an all-time low of 26 percent, according to an Emnid opinion poll for Bild am Sonntag newspaper.

In second place, Germany-wide, were the SPD and Greens, neck-and-neck at 17 percent each, narrowly ahead of the AfD at 15 percent.