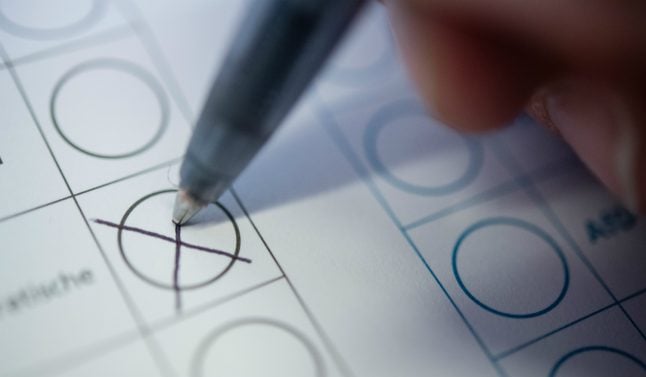 Bavaria will go to the polls on Sunday. Will the polls be correct? Photo: DPA

Both parties are in extremely difficult positions ahead of the election on Sunday. According to polls, both the Christian Socialists and the Social Democrats can expect heavy losses.

The ZDF ‘Politbarometer’, which was released late on Thursday, showed the CSU are currently at 34 percent, which is one percentage point less than the previous week. The Greens remain the second strongest force with 19 percent – a plus of one percentage point. The SPD lag behind with 12 percent.

Interestingly, the Free Voters' Party (Die Freien Wähler or FW), a conservative party which governs at a local level and is led by Hubert Aiwanger, have 10 percent. The AfD also scored 10 percent.

According to the ‘Politbarometer’, the Free Democrats (FDP)  managed 5.5 percent, while the Left Party (Die Linke) is at 4 percent (minus 0.5 points since the previous poll). Both parties will struggle to enter the state parliament if the polls are correct.

SEE ALSO: What you need to know about the upcoming Bavarian election

A total of 1075 voters were randomly selected in Bavaria for the most recent survey.

In the state elections of 2013, the CSU still had 47.7 percent of the votes, the SPD ended up with 20.6 percent, the Free Voters' Party scooped 9 percent while the Greens only had 8.6 percent.

In contrast to the Bundestag election a year ago, the CSU will not be supported by Chancellor Angela Merkel (CDU) at its official final rally in Munich happening Friday at 6pm.

At around the same time in Schweinfurt, SPD top candidate Natascha Kohnen and party leader Andrea Nahles will once again speak out against the decline of the Bavarian SPD and hope to inject some positive energy into their campaign.

Other parties are also staging election campaign events on Friday. For the Greens, who are currently riding on a wave of euphoria thanks to their recent boost, Baden-Württemberg's Prime Minister Winfried Kretschmann will be in the Swabian town of Ustersbach in the afternoon, and at 6pm, top candidate Ludwig Hartmann and former party leader Cem Özdemir will be in Munich.

In Nuremberg, high profile Brexit opponent Norman Baker, a member of the UK party the Liberal Democrats, will speak at an event organized by the FDP.

SEE ALSO: After beer and dirndl campaign, Bavarian politics is facing a shake-up

The CSU, which has so far been the sole governing party in Bavaria, has been polling between 33 and 35 percent in recent polls so it's likely that the party will not score a majority and will have to search for a coalition partner.

The most stable alliance would be one with the Greens, but commentators say the parties might be too different for that formation – and other partnerships are also possible.