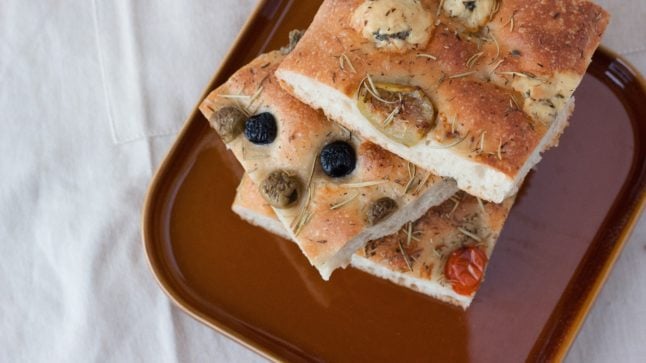 Giving bread in return for focaccia suggests a huge offence, even though they're both delicious baked treats. Photo: Iñigo De la Maza

Stare stretti come sardine | To be packed like sardines

You do know this idiom because you have borrowed this one into English. It means to be squeezed in a small place with more people than the place would actually allow, as canned sardines.

What you might not know is the origin of the word sardina: it derives from the name of the Italian island Sardinia because of the abundance of this fish in its waters, already known during the time of ancient Romans.

In another Italian island, Sicily, sardines are used as main ingredient for the superb pasta con le sarde, prepared with bucatini, hollow spaghetti, sardines and anchovies.

Rendere pan per focaccia | To give bread for focaccia

Focaccia is so delicious that you should be happy to receive it, even if you have to give bread in return. But despite the mention of tasty bakery products, the meaning of this idiom is actually “to return an offence or an injustice with even more harshness”.

Its origin is uncertain, but almost identical expressions were used in ancient Rome. More recently it appeared in the famous collection of novellas by Giovanni Boccaccio, The Decameron, and even Dante, in his Divine Comedy, mentions a similar construct with different food: “to give dates for figs”.

I love this one. Well, I love nougat.

The word nougat probably comes from Latin panis nucatus, “nutted bread”. There are three basic kinds of nougat. The white nougat (torrone in Italian) made with beaten egg whites and honey; it appeared in Italy in the early 15th century. The second is brown nougat (nougat noir in French, “black nougat”), made without egg whites and with a crunchy texture. The third is the Viennese or German nougat, which is essentially a chocolate and nut (usually hazelnut) praline.

The expression menare il torrone comes from the preparation of the nougat, which takes a lot of patience because both the single ingredients and the mixture need to be beaten for a long time. In the same way, someone who “beats the nougat” is challenging our patience by teasing us with annoying and protracted remarks, or with undesired attentions.

Francesca Mortadellina, a good friend of mine, says that this phrase isn’t offensive because it mentions sweets: if she says so… then use it without hesitations!

Lucullus is the guy who brought the cherry tree from Asia to Europe, a general who won an important war in Ponto, the area around the Black Sea, and came back to Rome full of glory and treasures.

After the war he decided to withdraw from public life and to enjoy his richness, by constructing big villas, libraries and collecting art masterpieces. He was an excellent host and his tables were always full of any kind of delicacies.

Plutarch tells us that once Lucullus was alone and was served a very frugal dinner. He called his servant to complain, and the servant answered: “Sir, there are no guests tonight, that is why there is little food on the table.” Lucullus exclaimed: “What? Don’t you know that tonight Lucullus is Lucullus’ guest?”

Today a lucullian meal means a sumptuous or lavish banquet.

Something is happening right in front of you and you didn’t notice? Well, why so – do you have slices of ham on your eyes??

Yep, in Italy we use this idiom when someone is not able, or doesn’t want, to realize something that for everybody else is pretty obvious. Apparently the expression originated in northern Italy, in Emilia-Romagna, a place that is very well known for the production of superb hams.

The English equivalent could be “to have your head in the sand”.

READ ALSO: Ten colourful Italian idioms and the strange meanings behind them This is an extract from Speak Like You Eat, a collection of more than 100 Italian food idioms written by Michele Segalerba and illustrated by his brother, Rossano Segalerba.

Michele speaks fluent Spanish, French, German, English and Portuguese. He’s lived in the Netherlands, in Ireland and he now lives in Mainz, Germany, where he works as an accountant for a pharmaceutical company. His heart, however, still belongs to his birthplace of Genova.

Rossano Segalerba was also born in Genova, where he attended art school, graphic narrative courses and graduated in communication science. His works have appeared on several underground publications and can be found in private collections. He lives in the beautiful coastal town of Santa Margherita Ligure, near Genova.

I’ve never been a great fan of sophisticated dishes, twisted recipes and extravagant concoctions that leave you wondering what is it you’re actually eating. T-bone steak with melted dark chocolate as topping, burrata cheese with apples, spaghetti with blueberry sauce aren’t my thing.

Hence, I never eat at Michelin-starred restaurants, and it’s not because of the exorbitant bill – paying €200 for a salad simply because it was grown in the private garden of a chef which he personally sprinkles with mountain water each morning, is a bit over the top.

I just don’t think such fancy food has anything to do with the real Italian tradition.

The ‘nouvelle cuisine’, as the name suggests, was invented in France by chef Paul Bocuse. And it’s ‘nouvelle’ – new – not anchored to past traditions.

The philosophy of serving small morsels of chic food on humongous plates as if they were works of art is the exact opposite of what Italian culinary tradition is all about.

We love to indulge in platefuls of pasta or gnocchi (and often go for a second round), and there are normally three courses (first, second, side dish, dessert and/or coffee), never a 9 or 12-course menu as served at Michelin establishments (unless, perhaps, it’s a wedding).

Too many bites of too many foods messes with flavours and numbs palates, and at the end of a long meal during which you’ve tasted so many creative twists you can hardly remember one, I always leave still feeling hungry and unsatisfied.

So back home, I often prepare myself a dishful of spaghetti because Michelin pasta servings often consist in just one fork portion artistically curled and laid on the dish. In fact, in my view Michelin starred cuisine feeds more the eye than the stomach.

The way plates are composed, with so much attention to detail, colour, and their visual impact, seems as if they’re made to show-off how great a chef is, than as succulent meals to devour. I used to look at my dish flabbergasted, trying to make out what those de-constructed ingredients were and are now meant to be, and then perplexed,

I look at the chef, and feel as if I’m talking to an eclectic painter who has created a ‘masterpiece’ with my dinner. I’m not saying Michelin starred food is not good, there are some great chefs in Italy who have heightened a revisited Italian cuisine to the Olympus of food, but I just don’t like it nor understand it.

There’s nothing greater than seeing a plate of steaming lasagne being brought to the table and knowing beforehand that my taste buds will also recognise it as such, and enjoy it, rather than finding out it’s actually a sweet pudding instead.

More than once, after a 4-hour Michelin meal with a 20-minute presentation of each dish by the chef, the elaborate food tasted has given me a few digestion problems which lasted all night long.

Michelin-starred food has started to raise eyebrows in Italy among traditional chefs, and is now the focus of a controversy on whether it embodies the authentic Italian culinary experience.

A Milanese born and bred, Cesare Battisti is the owner of restaurant Ratanà, considered the ‘temple’ of the real risotto alla Milanese.

He has launched a crusade to defend traditional Milanese recipes from what he deems the extravagance and “contamination” of Michelin-starred cuisine. “Michelin-starred experiments are mere culinary pornography. Those chefs see their own ego reflected in their dishes. Their cooking is a narcissistic, snob act meant to confuse, intimidate and disorientate eaters”.

Arrigo Cipriani, food expert and owner of historical trattoria Harry’s Bar in Venice, says Michelin-starred cuisine is destroying Italy’s real food tradition, the one served inside the many trattorias and historical osterias scattered across the boot where old recipes, and cooking techniques, survive.

“Tasting menus are made so that clients are forced to eat what the chef wants, and reflect the narcissistic nature of such chefs. Italian Michelin-starred cuisine is just a bad copy cat of the French one”, says Cipriani.

I believe we should leave French-style cuisine to the French, who are great at this, and stick to how our grannies cook and have taught us to prepare simple, abundant dishes. At least, you’ll never feel hungry after dinner.