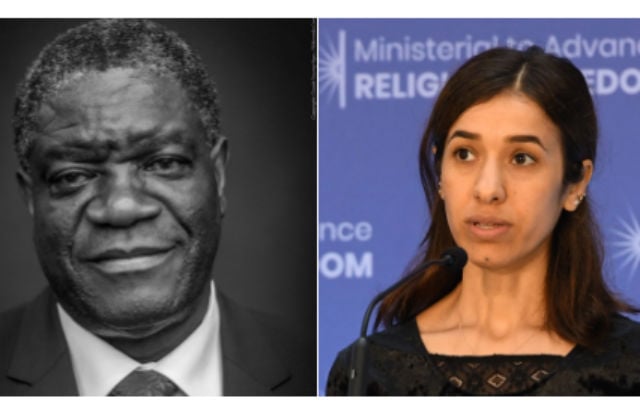 The pair won the award for their “efforts to end the use of sexual violence as a weapon of war,” Nobel committee chairwoman Berit Reiss-Andersen said in unveiling the winners in Oslo.

Both have come to represent the struggle against a global scourge which goes well beyond any single conflict, as the ever-expanding #MeToo movement has shown.

“They have both put their own personal security at risk by courageously combatting war crimes and securing justice for victims,” the committee said.

The Nobel peace prize committee said Nadia Murad, who was captured by Isis and repeatedly raped and subjected to abuses “is the witness who tells of the abuses perpetrated against herself and others.

“She has shown uncommon courage in recounting her own sufferings and speaking up on behalf of other victims”. The committee said that Denis Mukwege “has spent large parts of his adult life helping the victims of sexual violence in the Democratic Republic of Congo. Dr Mukwege and his staff have treated thousands of patients who have fallen victim to such assaults.” 2018 Nobel Peace Prize laureate Denis Mukwege is the helper who has devoted his life to defending victims of war-time sexual violence. Fellow laureate Nadia Murad is the witness who tells of the abuses perpetrated against herself and others. #NobelPrize pic.twitter.com/MY6IdYWN1e

Watch the moment the 2018 Nobel Peace Prize is announced.

In the run up to the announcement the bookies' odds pointed towards the Koreans, or Donald Trump. The experts were betting on the fight against sexual violence or defenders of the press.

The annual Nobel prize-giving week reached its peak as the five-member Norwegian committee ended the guessing game by announcing Mukwege and Murad as this year's winners.

This year, a total of 331 individuals and organisations were nominated for the prestigious peace award, almost a record number. But with the list a closely guarded secret, guessing the contenders was largely a game of chance.

Among the bookmakers, the choice had been largely unanimous with North Korean leader Kim Jong Un and his South Korean counterpart Moon Jae-in frontrunners for the prize for their efforts at rapprochement between the two nations.

But choosing Kim may have been a step too far for the Norwegian committee, given the UN's damning verdict on North Korea's “long-standing and ongoing systematic, widespread and gross violations of human rights”.

Another unexpected favourite had been Donald Trump, who at 7-1 is one of three frontrunners flagged by online bookies Betsson, with the odds suggesting the bombastic American president was 10 times more likely to win than figures like France's Emmanuel Macron or Russia's Vladimir Putin.

Last year, the prize was won by the International Campaign to Abolish Nuclear Weapons (ICAN).

“I find that one of the key challenges we have seen in America, but also in Europe and Asia, is the kind of increasing conflict based on inequality,” Mr Eide said in his nomination papers, according to The Guardian.

“Black Lives Matter has become a very important worldwide movement to fight racial injustice. They have had a tremendous achievement in raising global awareness and consciousness about racial injustice,” he added.

Founded in the United States in 2013, the Black Lives Matter movement gained momentum in May 2020 after George Floyd died. A white policeman had knelt on Floyd’s neck for eight minutes ignoring Floyd’s pleas that he couldn’t breathe.

The incident fuelled protests in the United States that sped across the world.

“This movement has become one of the strongest global movements for working with racial injustice,” Petter Eide, told AFP.

“They have also been spread to many many countries, building up… awareness on the importance of fighting racial injustice,” he said.

Tens of thousands of people, including MPs and ministers from all countries, former Nobel laureates and distinguished academics, can propose candidates for the various Nobel prizes. The deadline ends on Sunday.

The Nobel prizes will be announced at the start of October.