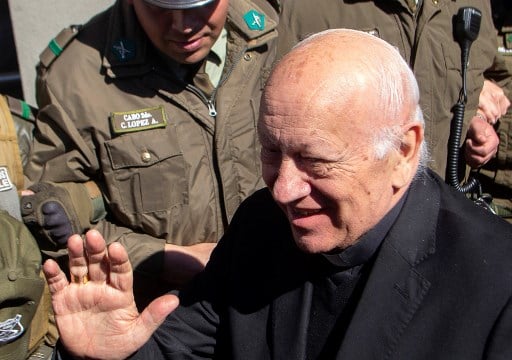 Ricardo Ezzati waves as he leaves after declaring at the public prosecutor's office for alleged cover-up of sex abuse in Rancagua, Chile on October 3, 2018. Photo: Claudio Reyes/AFP

The Catholic Church is under increasing scrutiny because of the escalating worldwide sex abuse crisis, which has seen scandals emerge in North and South America, Europe and Australia that have involved widespread claims of abuse – and cover-ups.

The highest-ranking member of the church in Chile, Ezzati entered the prosecutor's offices in the southern town of Rancagua under heavy police guard and surrounded by media.

After an hour being interviewed by Emilio Arias – the prosecutor investigating decades of sexual abuse of minors by Chilean priests – 76-year-old Ezzati left the courthouse saying: “We are all going to collaborate with everything.”

Hugo Rivera, his lawyer, said the cardinal had used his right not to answer questions about accusations he covered up the sexual abuse of minors, in particular crimes committed by a top diocesan aide.

“For now the cardinal has not spoken until we speak with the public prosecutor's office about the definitive dismissal” of the charges, the lawyer said.

He insisted the cardinal “is innocent.”

Arias began investigating scores of abuse cases in July after outrage over the church's own probe into decades of abuse by priests – crimes for which it often failed to take any action or handed down lenient punishments.

Pope Francis, who has removed several Chilean bishops over the scandal, admitted there was a “culture of abuse” within the Chilean church after sending investigators from the Vatican.

The pontiff said after meeting abuse victims that the church had failed “to listen and react” to the allegations, and vowed to “restore justice.”

Arias' office said in August that it was investigating 119 cases of abuse against Chile's clergy going back to 1960.

“We are going to prosecute anyone who has committed crimes,” Arias told reporters after questioning Ezzati.

“There is no witch hunt,” he said. “If there is a crime, we will prosecute… we will accuse and go to trial,” he said.

Ezzati has denied allegations that he covered up cases of abuse, including those of a top aide, Oscar Munoz. Munoz, 56, is under house arrest while a probe continues into allegations he raped at least seven children.

“The coward Ezzati goes to testify as an accused and decides not to speak so as not to incriminate himself,” said Cruz, one of the victims of the most notorious pedophile priest, Fernando Karadima.

Karadima, once a revered Chilean cleric, was formally expelled from the church by Pope Francis last Friday.

Francis caused an uproar during a visit to Chile in January when he went out of his way to defend controversial bishop Juan Barros, a protege of Karadima's who was accused of covering up his crimes.

Francis had appointed Barros as bishop in 2015 when the allegations against him were common knowledge in Chile.

Ezzati is now in the eye of the storm. In September, he was forced to sit out the traditional showpiece mass in Santiago Cathedral to celebrate Chile's Independence Day.

And this week, Chile's church was criticized by victims' groups for publishing a manual on its website – meant to provide guidelines for priests for interacting with children – which instructed them not to “touch the genitals” or “sleep with” children, give massage – or kiss children, adolescents or vulnerable people “on the mouth.”

The instructions were signed by Ezzati. Victims' groups said it was outrageous that priests had to be instructed that touching a child's genitals was wrong.

Chile's conservative President Sebastian Pinera is due to have talks with the pope during a visit to the Vatican on October 13.