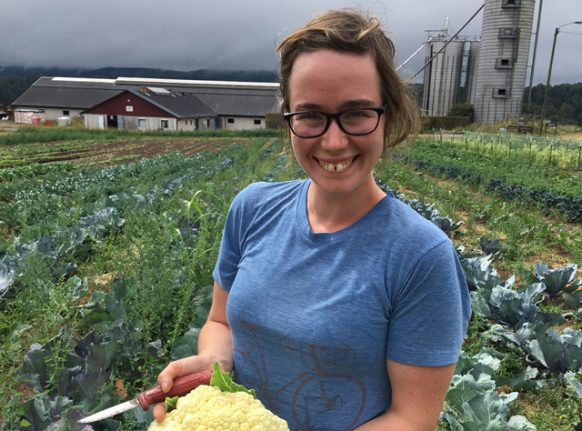 Finley Blackburn in front of one of her vegetable fields. Photo: Private

This article is part of The Local's My Swedish Career series. Read more interviews with international professionals and entrepreneurs in Sweden here.

“Moving here – it was because of meeting the right person and finding the right place to live,” says Finley Blackburn. The 28-year-old farmer from Oregon, USA, opened her own business in Sweden: she has a vegetable farm in Dalarna, central Sweden, called Lisselstugans Grönsaker.

Blackburn first came to Sweden as an exchange student in 2011, which was when she met her current partner. After living in southern Germany for some time, the pair decided to move back to Sweden together.

“Originally, I didn't come here to start a farm,” says Blackburn. Back then she had planned on studying in Uppsala, but quit her studies after just a short period of time. “Studying in Uppsala made me realize that sitting in front of a computer all day wasn't satisfying for me.” She thought back on her year in southern Germany, where she had volunteered on a farm – and really enjoyed it.

So she decided to give it a try in Sweden and enrolled at an agricultural university.

“I had some money saved, because I knew that I eventually wanted to start my own business. The decision to start a vegetable farm was made because of multiple reasons,” Blackburn recalls, going on to say that family was a priority for her and that she still wanted to visit her parents frequently in the US. “Visiting them wouldn't be possible if I had an animal farm, because you can't just call a friend and tell them to look after your animals.” “The biggest difficulty was learning how to work in farming. I hadn't done it before.” She explains that farming is much more than just to know how to grow tomatoes – it's also about learning how to do monotonous work so that it is both efficient and doesn't hurt your body. “When you do the same movement for 500 times, you can seriously injure yourself,” Blackburn says.

Finding education and getting into the farming community was also tough: “A lot of things in the community happen unofficially. That makes it hard for someone from the outside to find land or to get into it.”

But Blackburn didn't let those struggles crush her plans – even though there were times where she felt like quitting would be easier.

“The thing that finally kept me going was when I had my son,” she remembers. “I then realized that what I do with my life has to be something that I enjoy doing.”

2018 is the first year Blackburn has had the farm – and it was a tough one. Sweden's unprecedented heatwave and drought made it hard to keep the plants alive. Sometimes she had to work for 15 hours a day, every day of the week. “I have never been this stressed out,” she admits.

But in the end, the stress and hard work had a positive outcome: “We had problems, but we got through it. And I decided that I can't back out now; this is exactly what I want to be doing.”

During her time in Sweden, Blackburn has lived in Uppsala and Skara before eventually settling down in a rural part of the country, near a small town called Gustafs in the picturesque Dalarna region. “I don't understand the focus on the cities,” she says. “People always say that 20 percent of Swedes live in Stockholm, but that also means that 80 percent of Swedes don't live in Stockholm.”

Since moving to Sweden, the 28-year-old has noticed huge differences compared to the US, including different culinary trends. Swedish food trends are more focused on traditions, she explains, while in the US, trends are more extreme – but might completely disappear after a short while.

“An example for that is red cabbage,” Blackburn says. “In Sweden, it's only eaten at Christmas. During the rest of the year, people won't buy it. In the US, it would be possible to market red cabbage as a luxury food. The tradition and history of when to eat certain foods is missing [in the US].” Red cabbage on a field in front of Blackburn's home. Photo: Private

But there are also social differences between the two countries. “What I love about Sweden is the idea that everyone contributes to the society, like with taxes,” Blackburn notes. “Almost everyone in the US has an aversion to paying taxes. Here, I once heard someone say that they think it contributes to the improving of institutions. That was such a difference.”

Blackburn also speaks positively about Sweden's gender equality and parental leave. She had never seen a father taking parental leave before, and the popularity of paternity leave in Sweden changed her whole view on having children of her own: “I never saw myself as a stay-at-home-mum, but realizing that I wouldn't have to do that here changed everything.”

At the same time, there have been more challenging aspects of the culture to get used to, including the difficulty of making close Swedish friends. “They are great people, but there is just no real spontaneous interaction. As an American, I was always used to that. But here, social interactions feel much more genuine when they happen,” says Blackburn.

Her advice for people coming to Sweden is simple: “Learn Swedish! When I came here, I was really stubborn; I didn't want anyone to speak English to me. When you don't live in the cities, people will be more comfortable around you when you speak Swedish. And it would be hard to get into farming if you don't speak it.”

Blackburn also has an immediate answer to the question of whether there were any revelations after moving to Sweden: “Living here has totally expanded my view of life.”