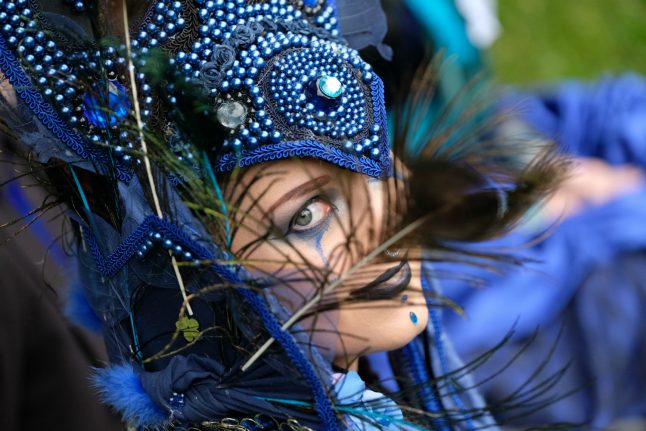 The Victorian picnic during the Wave-Gotik-Treffen festival in Leipzig in May this year. Photo: DPA

Oh Leipzig, you had me at the Lerche. Any place that sells a glorified Cherry Bakewell tart in every bakery is bound to win my heart.

The pastry, known as a Leipziger Lerche, used to be filled with the meat of the songbird lark (its name translates to lark in German). The bird was roasted along with herbs and eggs and encased in shortcrust pastry.

But after King Albert of Saxony banned the hunting of songbirds in 1876, local pastry chefs saved the day by changing the recipe into a sweet treat to preserve the birds and keep the bellies of townspeople full.

In some ways, the shortcrust cake, which is now made with a mixture of almonds, nuts and a cherry, represents the city’s ability to reinvent itself and transform, which it has constantly had to do over the years.

With a rich history filled with music as well as gory battles, to being nicknamed the 'Heldenstadt' – City of Heroes – for its role in bringing about the fall of the East German regime, Leipzig is definitely worth exploring.

Around two hours on the train or three hours by bus from Berlin, modern day Leipzig has plenty to offer visitors, whether you're heading on a couple's getaway, travelling with friends or family or taking a solo trip.

Chow down on a Lerche and head to St. Nicholas Church – Nikolaikirche – to see where one of the city’s most well-known sons: composer Johannes Sebastian Bach performed back in the 18th century.

This spot is also where the Monday demonstrations movement, a series of peaceful protests against communism, started in September 1989.

A poster of composer Johannes Sebastian Bach, with his statue and the St.Thomas Church in the background. Photo: DPA

East Germans gathered in the court of the church to demand rights such as the freedom to travel to foreign countries and elect a democratic government – and it spurred other towns and cities to join in, leading to the fall of the Berlin Wall just weeks later.

You can jump on a bike or ride on Leipzig’s extensive tram system to get out of the city centre, and chill in a park, such as the Rosenthal, which overlooks the zoo (this has been recommended to me as a great family day out), or Clara-Zetkin Park, further south.

The Monument to the Battle of the Nations (Völkerschlachtdenkmal), is a huge towering structure which commemorates Napoleon's defeat at Leizpig in 1813 and has a great video collage that condenses modern Leipzig history into about 15 minutes: a great overview.

It’s worth visiting for the views of the city – and beyond – from the top. Keep in mind, though, that while the lift covers most of the monument, there are a lot of steps to get to the highest point.

When you don’t want to feel like a tourist, check out some of the bars, restaurants and culture spots that Leipzig has to offer.

The city’s nicknames – ‘hypezig’ or ‘the new Berlin’ – don’t really reflect the city accurately. Leipzig is more down to earth, has less of a pretentious vibe and feels more rough around the edges than Berlin. There is a strong multicultural feel, like in Berlin, but you won’t find so many people immediately speaking English compared to the capital (a plus point if you’re learning German).

You will, however, find gentrified areas as well as restaurants and bars with a hipster feel.

The old industrial area of Plagwitz has a mix of old factories and wastelands, some of which have been transformed into studios and art exhibition spaces, like the Baumwollspinnerei or the Kunstkraftwerk.

In this area you could also check out Chinabrenner, which offers laidback surroundings and delicious food and the nearby Noch Besser Leben, a popular bar and gig venue.

The area around Karl-Liebknecht-Straße in the south is also home to a few good bars and restaurants, such as Flower Power, which always has a great selection of live music.

There’s a few good vegan and vegetarian spots in Leipzig, too, such as Zest, in the south, for hearty portions and good beer. If you're after something more traditional head to Mein Leipzig in Käthe-Kollwitz-Straße.

Visitors to the Kunstkraftwerk in Berlin during the 'Hundertwasser Experience' exhibition in 2016. Photo: DPA

The city’s Eisenbahnstraße in the east is known as a crime hot spot (it's often in the local newspapers) but you’ll also find cool cafes, bars and Das Japanisches Haus, a community project aimed at bringing people together from the district’s immigration population with students and locals.

Leipzig has an alternative feel, evident in the goth and punk styles of many who live in the city, so if this is your thing feel free to dress in whatever takes your fancy.

In fact, Leipzig is home to the goth music and arts festival, Wave-Gotik-Treffen, which is the largest of its kind in the world and happens every year, usually sometime in May.

A woman takes a picture of a toy baby during the Wave-Gotik-Treffen in Leipzig this year. Photo: DPA

Around 20,000 people flock to the eastern city to watch bands, meet people and showcase amazing style. Although I’ve not been (yet), a highlight is said to be the Victorian picnic that takes place in Clara-Zetkin Park.

So whether you want to chill with a coffee, check out some art, brush up on your history or indulge your dark side, I think there’s something for everyone in Leipzig.

Do you have any insider tips for Leipzig? Let us know by leaving a comment or by emailing: [email protected]