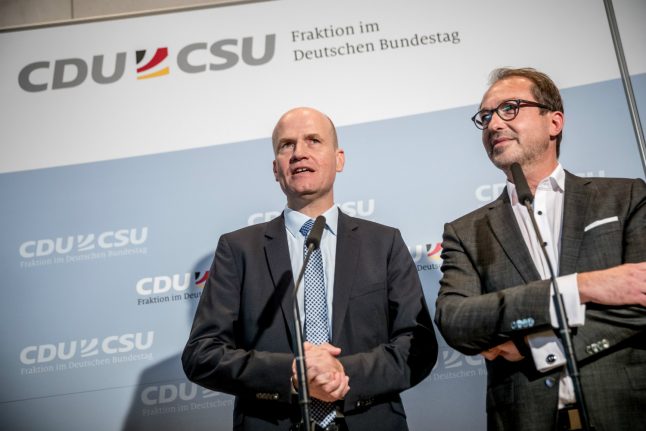 It was a shock that no one saw coming. On Tuesday Volker Kauder, who has headed the parliamentary group of Angela Merkel’s CDU and Bavarian allies CSU for 13 years, lost in a re-election battle to challenger Ralph Brinkhaus, a relative unknown.

The surprising result came a day after Merkel was forced to admit mistakes in her handling of a row surrounding Germany's outgoing domestic spy chief.

Political observers and opponents called the vote a slap in the face for the chancellor, who had campaigned hard for Kauder's re-election.

“This is a revolt against Merkel,” wrote the centre-left SPD's parliamentary group leader Thomas Oppermann on Twitter minutes after the result was published.

Deputy leader of the SPD, Ralf Stegner noted that the result “shows how deep the erosion of power within the (CDU-CSU) is.”

Politicians with gaping mouths aside, German media outlets were also caught by surprise and have been analyzing why it happened and what it means.

An opinion piece published by Zeit on Tuesday said: “The Chancellor's power is dwindling at an alarming rate. If Merkel's chancellorship were a ship, the water would now be up to the engine room.”

Zeit said the vote was “not a long-planned coup against the Chancellor”, but instead it’s possible that members of parliament “simply wanted to send a signal with their vote”.

The newspaper said Merkel will now have to “listen more to her faction and party”.

“She must take seriously the rebellion that has become unmistakable in recent months,” it said.

Suddeutsche Zeitung called the defeat a “humiliation” for Merkel.

“The victory of Ralph Brinkhaus over Volker Kauder is not just a surprise,” the newspaper said. “It is a cut in Merkel's chancellorship that reaches even deeper than her public regret about mistakes in the case of Maaßen the day before.”

Earlier on Tuesday, Spiegel Online had said that a win by Brinkhaus would mean that “Merkel should really clean out her office in the chancellery immediately – his election would be nothing short of a vote of distrust against the leader of the government.”

On Wednesday the publication said:  “On paper it was a revolt against the leadership.”

The news outlet put the move down to the majority of the CDU/CSU faction members being “fed up with the fact that Merkel and Seehofer are constantly at loggerheads with each other, and with the ongoing dispute with the SPD, especially since the Union's poll results are constantly getting worse”. Spiegel said there was no flavour for new Federal elections “at least so far”. So members looked for another way to revolt – by sending the group leader packing.

Why is it happening now?

After nearly 13 years in power, Merkel has seen support for her centre-right party chipped away by the far right, which has mobilized backing with its anti-immigration stance.

Merkel's decision not to close the border to more than one million asylum seekers at the height of the refugee influx in 2015-2016 continues to affect the political landscape.

Voter anxiety over the policy swelled support for the far-right Alternative for Germany (AfD) party, which captured nearly 13 percent of the vote in the September 24th, 2017 general election.

Spats with Interior Minister Horst Seehofer over immigration during the summer and riots in the eastern city of Chemnitz at the end of August sparked by the death of a German man, allegedly by asylum seekers, has also affected the party's popularity. A recent poll showed support for the Union at 28% – the lowest result since the 'Deutschlandtrend' survey started in 1997.

In recent weeks the row over the former German spy chief Hans-Georg Maaßen, who contradicted Merkel by questioning the authenticity of video footage showing the “hunting down” of people in Chemnitz has further damaged the reputation of the coalition and her party.

Brinkhaus, a tax consultant by profession, joined the CDU in 1998, and is said to be an expert when it comes to issues concerning finance and budget financial, though not in broader political questions.

He has described by German media outlets as “rather a quiet guy” but Brinkhaus has clashed with Merkel in the past, such as in 2017 when he challenged her proposal to limit tax write-offs for business managers.

Although colleagues welcomed his candidacy as a “renewal of group leadership”, political observers question whether his focus on finance limits his perspective.

What is Merkel saying herself?

Not much at the moment, but she remains characteristically diplomatic.

In a brief statement, Merkel thanked Kauder and congratulated Brinkhaus, adding that “this is an hour of democracy, in which there are also defeats and there's nothing to gloss over.”

Brinkhaus himself said opposing Merkel was not his intention of joining the race.

But he felt the parliamentary group needed a change at the top after 13 years.

It's not about shifting the group in a specific direction, but about an internal positioning of the group and how we can get new momentum,” Brinkhaus said ahead of the vote results.