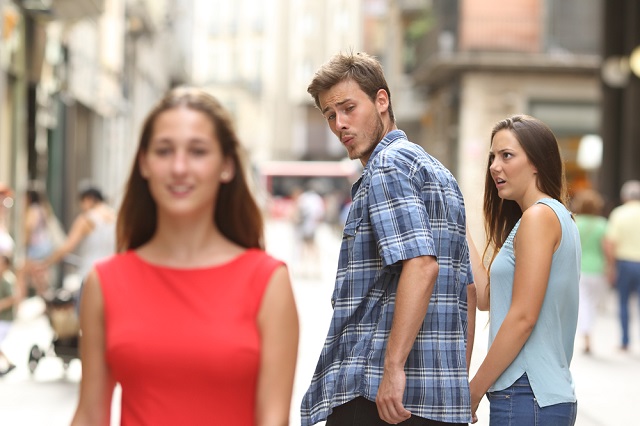 Do you find this meme sexist? Photo: AntonioGuillemF/Depositphotos

The image, known by online communities as 'Distracted Boyfriend Meme', is based on a stock photo of a man turning away from his appalled girlfriend to look at an attractive woman. Swedish internet service provider Bahnhof used the image alongside a jobs advert; in their take on the meme, the boyfriend was turning away from “your current workplace” to stare at Bahnhof.

READ ALSO: 'Why we ruled that a Distracted Boyfriend meme advert was sexist'

The original posts shared to Bahnhof's Facebook and Instagram pages received hundreds of comments. Many of these criticized the alleged sexism of the image, and the advert was reported to Sweden's Advertising Ombudsman, the body which regulates the advertising industry.

“It portrays women as interchangeable objects, and that only their appearance is interesting,” wrote the ombudsman, which was unanimous in its decision. It added that there was no link between the services provided by Bahnhof and the objectified image of the women.

“According to the committee, the objectification is reinforced by the fact that women are designated as workplace representatives while the man, as the recipient of the advertisement, is being produced as an individual,” the judgment said.

Some of the reviewers involved in the decision also said that the advert presented “degrading” stereotypical views of both women and men. “It gives the impression that men might change female partners in the same way they change jobs. One notifier pointed out that Bahnhof may put off female applicants with the advertisement,” the judgment stated.

Bahnhof argued that its sole intent with the image was to “show that Bahnhof is an attractive employer and that those who have a slightly less good employer could be interested in us”, in a statement signed by its head of communications Anya Alenberg and CEO Jon Karlung.

“Everyone who follows the internet and meme culture knows how the meme is used and interpreted. [Whether someone is a] man, woman or neutral gender is often irrelevant in this context. We are an internet company and are conversant in this, as are those who would look for a job with us, so we turned to that target group,” the statement continued. “If we should be punished for anything, it's for using an old and tired meme.”

In an effort to prove that the gender wasn't a relevant part of the meme, Bahnhof had posted several variations of the meme the day after sharing the original, in which the characters were replaced by those of different genders and animals.

The ombudsman acknowledged the humorous intent of the picture and the fact it had been widely shared by other individuals and companies, but added that even well-known memes may not be mainstream.

'Distracted Boyfriend Meme' started going viral in summer 2017, and prompted online articles analyzing the image, successful attempts to track down the photographer and models, alongside thousands of variations on the meme. It was listed as one of 2017's top memes by multiple publications, with a New Yorker columnist saying that it “allowed America to turn its attention away from much more important commitments”, much like the boyfriend in the image.

Sweden's Advertising Ombudsman has guidelines stating that advertisements should not depict women or men as “mere sex objects” or in other ways which are “degrading and clearly sexist”. However, the self-regulatory body only has the ability to make judgments on adverts, not to impose sanctions.

Because of this restriction, Stockholm's city council voted last year to remove any advertising billboards deemed sexist or degrading from public spaces in the capital.