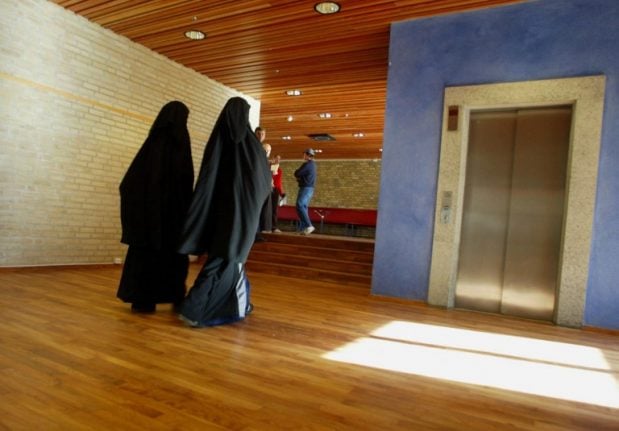 Opponents of the ban described the new law as populist fearmongering. PER WISSING / SCANPIX SWEDEN / AFP

Nearly 67 percent of voters in the northeastern Swiss canton voted in favour of the new law, according to official results, paving the way for it to follow the example of the southern canton of Ticino, where a law was introduced two years ago that appeared to be aimed at burqas and other Muslim veils.

A text stipulating that “any person who renders themselves unrecognisable by covering their face in a public space, and thus endangers public security or social and religious peace will be fined” was adopted by lawmakers in St. Gallen late last year.

That law passed the regional parliament with support from the populist right and centre parties — but the issue was put to the people after the Green Party and Young Socialists demanded a referendum.

Switzerland's government last year opposed an initiative aimed at creating a nationwide burqa ban, saying it should be up to the regions to determine if such measures are appropriate.

Voters across Switzerland are however expected to be called to vote on the issue next year after the populist rightwing Swiss People's Party gathered the 100,000 signatures needed to put any subject to a referendum as part of Switzerland's famous direct democratic system.

Mosques in the city of the banks of the Rhine will be allowed to call worshippers to prayer on Fridays for five minutes between midday and 3pm.

“Many residents of Cologne are Muslims. In my view it is a mark of respect to allow the muezzin’s call,” city mayor Henriette Reker wrote on Twitter.

In Muslim-majority countries, a muezzin calls worshippers to prayer five times a day to remind people that one of the daily prayers is about to take place.

Traditionally the muezzins would call out from the minaret of the mosque but these days the call is generally broadcast over loudspeakers.

Cologne’s pilot project would permit such broadcasts to coincide with the main weekly prayer, which takes place on a Friday afternoon.

Reker pointed out that Christian calls to prayer were already a central feature of a city famous for its medieval cathedral.

“Whoever arrives at Cologne central station is welcomed by the cathedral and the sound of its church bells,” she said.

Reker said that the call of a muezzin filling the skies alongside church bells “shows that diversity is both appreciated and enacted in Cologne”.

Mosques that are interested in taking part will have to conform to guidelines on sound volume that are set depending on where the building is situated. Local residents will also be informed beforehand.

The pilot project has come in for criticism from some quarters.

Bild journalist Daniel Kremer said that several of the mosques in Cologne were financed by Turkish President Recep Tayyip Erdoğan, “a man who opposes the liberal values of our democracy”, he said.

Kremer added that “it’s wrong to equate church bells with the call to prayer. The bells are a signal without words that also helps tell the time. But the muezzin calls out ‘Allah is great!’ and ‘I testify that there is no God but Allah.’ That is a big difference.”

Cologne is not the first city in North Rhine-Westphalia to allow mosques to broadcast the call to prayer.

In a region with a large Turkish immigrant community, mosques in Gelsenkirchen and Düren have been broadcasting the religious call since as long ago as the 1990s.