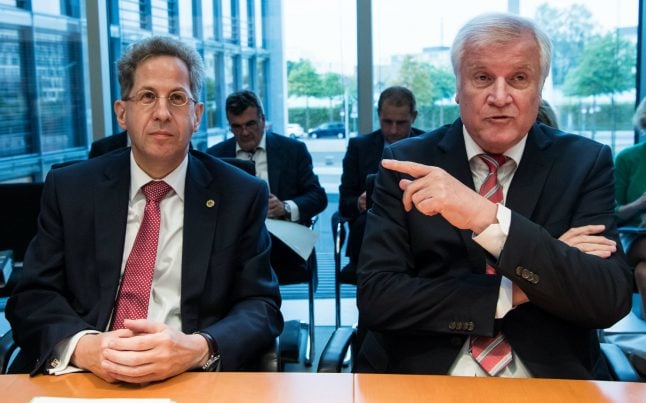 However, this does not include the supervision of his former place of work, the Office for Constitutional Protection (BvF), Interior Minister Horst Seehofer (CSU) said during a press conference in Berlin.

Among other tasks Maaßen will be in charge of the federal police, cyber and information security as well as public security departments.

The successor in BvF is open for the time being. Until this is clarified, Maaßen is to remain in office because the security situation in Germany is “indispensable,” said Seehofer.

The supervision in the Interior Ministry of the BvF will be taken over by secretary of state Hans-Georg Engelke, who is also responsible for the construction sector.

Seehofer said Maaßen was an “official, who is just doing the job where he is placed”.

Maaßen replaces Gunther Adler, of the Social Democrats (SPD). This move will likely fuel disappointment within the SPD, which is already experiencing divisions due to the  Maaßen saga.

Adler was previously responsible for urban development, housing and construction in the Interior Ministry.  Seehofer had praised Adler when he took office and reaffirmed his appreciation on Wednesday, but said it was a “consequence of the fundamental decision”.

Chancellor Angela Merkel (CDU), CSU leader Seehofer and SPD leader Andrea Nahles had agreed on Tuesday on the promotion of Maaßen as secretary of state in the Interior Ministry.

It was sparked after Maaßen gave comments in a newspaper interview on xenophobic incidents in Chemnitz. He had questioned the authenticity of amateur video footage, seemingly contradicting Merkel, and was also accused of having questionable links to the far-right. Horst Seehofer at a press conference in Berlin on Wednesday. Photo: DPA

Candidates for a possible successor were not mentioned, said Seehofer. “Yesterday, nobody – neither Mrs. Nahles, nor the Chancellor, nor me – put any name on the table, nor discussed. Zero.”

The CSU leader also rejected criticizm of  Maaßen and said he would not have pursued the decision to move him from the BvF.

“The result of the conversation is a compromise, since the coalition partner no longer had confidence” in  Maaßen as BfV boss.

Seehofer praised Maaßen as a “competent, honest employee”, who had earned high merit, especially in the fight against terrorism. He said he was “very trustworthy”.

Earlier in the day former SPD leader Sigmar Gabriel had called the move to transfer Maaßen as “crazy”, Zeit reports.

“If disloyalty and incompetence in the office are now rewarded with career leaps, then Horst Seehofer has the chance to become UN secretary general,” said Gabriel. “That's crazy.”

Other SPD politicians had also criticized the decision. Kevin Kühnert, boss of the youth wing of the SPD (Juso) told the ARD-Tagesthemen that his “personal pain threshold” had been reached.

“The patience with this grand coalition is extremely thin in the SPD,” he said, calling Maaßen's promotion a “grave wrong decision that will overturn politics as a whole”.

SPD General Secretary Lars Klingbeil said he hoped the conflict would not be defused.

He told the Tagesthemen that the coalition must now finally return to work and “come out of this permanent crisis mode”.

The FDP, meanwhile, proposed to appoint a “representative for intelligence services of the German Bundestag” in order to strengthen the control of the secret services by the parliament.