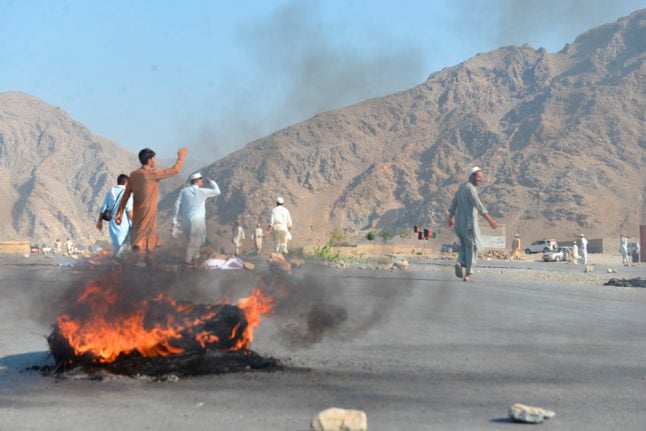 A suicide bomber detonated an explosives-filled vest among a group of protesters in eastern Afghanistan last week, killing 25 and wounding about 130. Photo: Mohammad Anwar Danishyar/AP/TT
Student activist Elin Ersson protested against the Swedish government’s policy of deporting some rejected asylum seekers to Afghanistan by boarding an Istanbul-bound flight that carried an Afghan man who was to be returned home after being denied asylum.
With a ticket for the flight that was purchased by the activist group 'Sittstrejken i Goteborg’, the activist boarded the plane and then refused to sit down until the Afghan man was let off. Flights are not allowed to take off until all passengers are safely in their seats.
Ersson livestreamed her protest on Facebook, where it has been viewed over five million times.
The reaction of her fellow passengers was mixed, with some confronting the student and telling her to sit down and stop filming and others expressing their support. Reaction on social media was similarly divided with many hailing the student a “hero” but others criticizing the method of protest.
Eventually, Ersson was told that the man would be let off the plane and she was also removed by airport security.
“All I want to do is stop the deportation and then I will comply with the rules here. This is all perfectly legal and I have not committed a crime,” Ersson said in the video.
Shortly after the incident, a preliminary investigation was started to determine whether Ersson contention was correct. On Friday, prosecutors announced that they disagreed with the student activist’s stance on the legality of her actions.
“It is clear that when you look at this objectively, a crime was committed,” prosecutor James von Reis told SVT.
Although the SVT report did not indicate the specific violation of the Aviation Act, the law does refer to “disturbing the order or jeopardising flight safety or aviation security.”
Von Reis said that Ersson would soon be brought in for questioning and that he hopes to be able to formally prosecute the case in the near future.
“We will now hear what the suspect has to say and what sort of explanation the suspect has,” he said.
Violating the Aviation Act can result in fines or a maximum six-month imprisonment.
It is believed that the Afghan man who was due to be deported from Sweden via the Istanbul-bound flight out of Gothenburg was later deported from a different location.
In 2017, 9,062 rejected asylum seekers were ordered to leave the country by the Swedish Migration Agency, press officer Pierre Karatzian told The Local. At the time of Ersson’s protest, the figure for 2018 was at 4,292, although this may not reflect the exact number of deportations carried out, since deportations are carried out by the police and may change, for example if new information comes to light or it is not possible for them to return to their home country.
Activists have been campaigning against the Swedish Migration Agency's continued deportations of Afghan asylum seekers for months, including previous protests at the country's airports.
The Swedish Foreign Office's official travel advice to residents is to avoid all travel there “due to the security situation”, but the Migration Agency maintains that parts of the country, including its capital Kabul, are safe enough for asylum seekers to be returned there.
broadcaster+SVT+reported+on+Friday.&source=Europe\'s+news+in+English'); return false;" href="#">