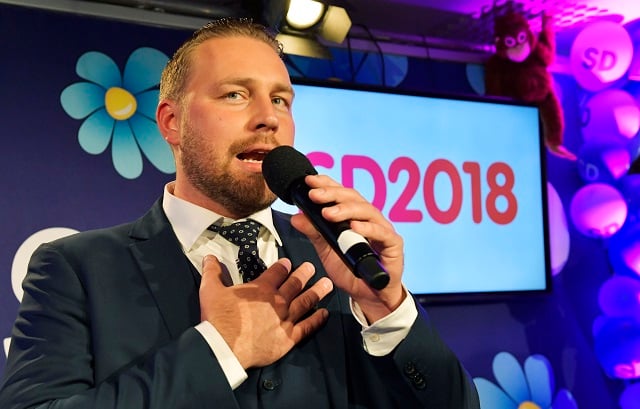 In the post, Karlsson wrote that with the 2018 election over, the campaign for EU elections and the next general election in four years' time had begun.

“Analyses will be carried out, our strategies and political weapons will be honed, refined and made more efficient,” he wrote.

He said that Sweden was “really in trouble” as it had been before in its history, saying that the nation had withstood and resisted attacks and occupations thanks to “the unwavering stubbornness, conviction, sacrifice and leadership of a small group of patriots”.

“We haven't chosen this, but our opponents have really forced us into an existential fight for our culture's and our nation's survival. There are only two choices, victory or death. There is only one way, and that is forwards,” Karlsson continued.

He accompanied the statement with an excerpt of a speech given by Winston Churchill in 1940, shortly after German forces attacked France, and an image of the 17th-18th century Swedish Carolean army, who had a reputation for winning many of their battles even when outnumbered.

The post has been criticized by politicians and commentators both for factual inaccuracies and for the extreme tone.

On Wednesday afternoon, Prime Minister Stefan Löfven commented on the posts, saying: “Here we have a party that publicly embraced pure war rhetoric. There can't possibly be any more proof needed that the Sweden Democrats should never be given power to decide Sweden's future.”

Historian and liberal commentator David Lindén pointed out in an article for Nerikes Allehanda the historical errors, including the fact that Sweden has never been occupied by foreign forces and that the country has always had allies.

“Note the language and the anti-liberal worldview,” Public Administration Minister Ardalan Shekarabi of the Social Democrat party commented on Twitter. “Any democrat who sees these forces as 'government material' is naive and has not learned anything from the history of Europe.”

The political editor of three liberal Södermanland newspapers, Alex Voronov, said that Karlsson “is living in a fascist fantasy world”.

“Those who believe that the SD have been normalized and should be 'nurtured' in a government collaboration should check how Mattias Karlsson expresses himself now the election is over,” political scientist Carl Melin commented on Twitter.

Karlsson responded to his critics on Wednesday afternoon, admitting that his statement could be “perceived as dramatic for anyone who has never heard an attempt at pep talk”.

He further said that Sweden had been governed for a long time by “explicitly internationalist parties” and that a lower proportion of the population had “a Swedish identity and loyalty”.

The Sweden Democrats remained the third largest party after the September 9th election, increasing their share of the vote from 12.9 percent in 2014 to over 17 percent but failing to overtake the centre-right Moderates as some polls had predicted.

With some votes still remaining to be counted on Wednesday, it could take months before Sweden has a new government in place.

The Sweden Democrats are hoping to play a pivotal role, with party leader Jimmie Åkesson telling Swedish public radio on Monday: “He who understands first that he can talk to me will have the easiest time building a government.”

For the time being however, all the leaders of Sweden's major parties have ruled out an alliance with the far-right and anti-immigrant party.

READ ALSO: Will Sweden be able to form a government?