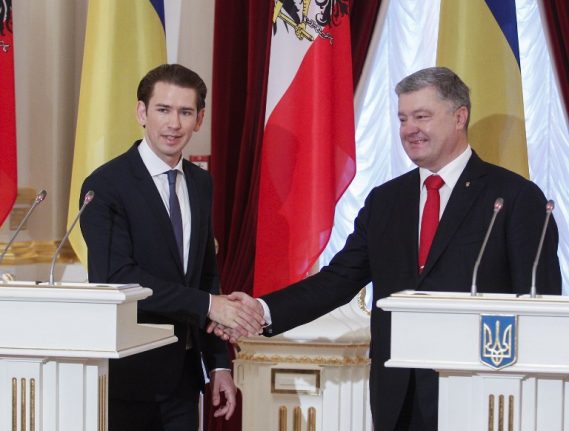 “I speak not only as Chancellor but also as President of the EU Council, we need a clear reaction to the Russian aggression” in eastern Ukraine, Kurz told reporters after talks with Ukrainian President Petro Poroshenko.

“I must note that it makes us very unhappy that the situation remains so tangled,” said the 32-year-old conservative leader, who has sought to improve EU ties with Russia.

Kurz called on Russia to “return to the negotiating table,” including with France and Germany, in quotes released by Kiev.

“This is the only format that we have so far,” Kurz was quoted as saying.

Germany and France have sought in recent months to revive the stalled peace process in a bid to settle the simmering conflict.

But Moscow ruled out any talks in the near future following last week's assassination of east Ukraine's top rebel, Alexander Zakharchenko.

Kurz's visit to Ukraine came after Putin's dance with Austria's foreign minister as a guest at her August wedding caused uproar in Ukraine and Europe.

A senior Ukrainian official, speaking on condition of anonymity, told reporters that the Austrian Chancellor had promised to provide Kiev with an “explanation” about Putin's visit.

“This wedding has caused considerable damage to Austria's reputation in Ukraine,” Ukrainian Ambassador to Austria Oleksandr Scherba wrote on Facebook on Monday.

During a joint media appearance with Kurz, the Ukrainian leader thanked Vienna for its “strong support” and added that “no weddings … can stop the Russian aggression.”

Journalists were not allowed to ask the leaders any questions, underscoring the sensitivity of the topic.

More than 10,000 people have been killed since the rebel insurgency began in the eastern Donetsk and Lugansk regions in April 2014 following Russia's annexation of Crimea from Ukraine.

Ukraine and its Western allies accuse Russia of funnelling troops and arms across the border, which Moscow denies.

The photos of the 53-year-old Austrian foreign minister, Karin Kneissl, dancing with Putin and bowing to him at her wedding fuelled questions about her neutrality and that of the EU country.

She shrugged off the row, insisting he attended at her private invitation.