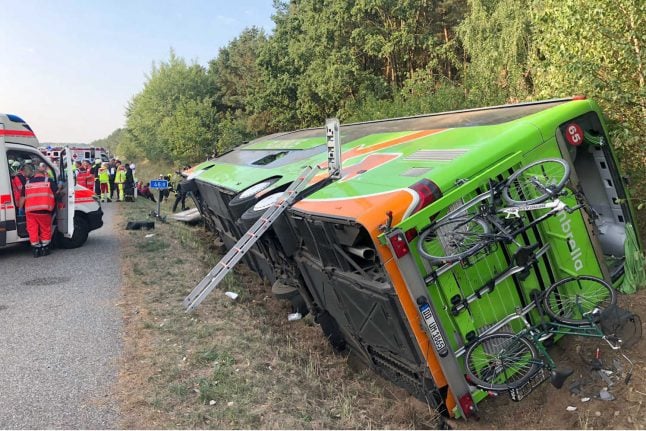 Rescue workers at the scene of the crash on Autobahn 19 at Linstow, Rostock, on Friday morning. Photo: DPA

The bus was travelling on Autobahn 19 at Linstow, a district in Rostock, Mecklenberg-Western Pomerania, when the incident happened.

According to Danish media reports and Swedish media reports, the bus was travelling from Stockholm in Sweden and had picked up passengers in Copenhagen before the crash in Germany.

A police spokesman in Rostock said 16 people were injured. It is thought that the bus veered off the road and fell into a ditch.

Emergency service workers at the scene of the crash. Photo: DPA

The Autobahn has been closed in the direction of Berlin since 6.30am.

According to police, eight people were seriously injured and eight other people suffered less serious injuries. One of the passengers became stuck and had to be cut out of the bus by rescuers. No other vehicles are involved in the incident.

The police could not say if the bus driver had also sustained injuries.

A spokesman for the district of Rostock said there were around 60 passengers on the bus at the time.

Several fire brigades, rescue workers and three helicopters were deployed to the site.

Helicopters were deployed to assist during the incident. Photo: DPA

A Flixbus spokeswoman confirmed that the vehicle was a long-distance bus from their company.