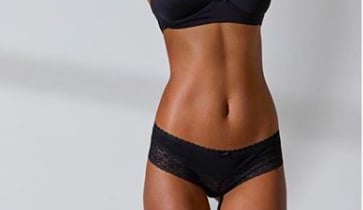 Has this woman just given birth. Photo: H&M
The adverts for the brand's nursing bras featured thin models, none of whom showed the slightest trace of a post-baby belly, and were replaced on Thursday after criticism from Annonsrådet, a campaign group founded by advertising industry professionals.
“This is a picture from H&M’s online shop, which shows a breast-feeding bra. But which, WHICH, new mum (or even not so new mum for that matter) looks like this?” the group wrote in an Instagram post.

The campaigners said the company’s decision to use models who had not actually given birth was “dangerous” and added to the “enormous pressure” put on women to return to a “normal body” after childbirth.
“Imagine if H&M instead took some responsibility and used mums who are actually still breastfeeding,” the group added. “Just imagine!”
Joanna Morell, press chief for H&M Sweden, told SVT Nyheter that the company understood the concerns.
“It is true that we have taken down the pictures,” she said. “We understand our customers’ feedback and are going to take extra care in the future.”
Journalist Marie Björk, in an opinion piece posted on SVT’s website, said that H&M’s choice of pictures had probably been completely unthinking.
“Fat-shaming is so widespread and established that it seems natural to use skinny models whenever women are shown in underwear,” she wrote. “I don’t believe that they even realized that this was an out-and-out insult against the intended audience, that is to say those who are breastfeeding.”
READ ALSO: H&M 'racist' ad adds to company's woes