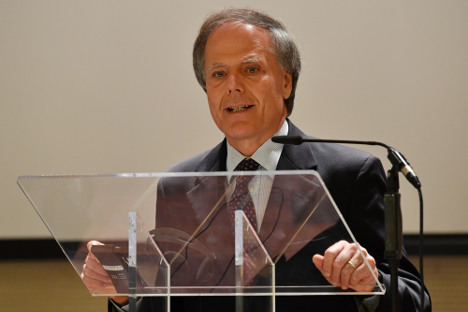 In a message marking the anniversary of the 1956 Bois du Cazier mine disaster on Wednesday, Milanesi reminded people that Italy was once “a nation of emigration”.

“We have been a nation of emigration, we went out into the world looking for work as foreigners,” Milanesi said, adding that it was necessary to remember this “when we see the migrants of our troubled age arriving in Europe.”

But he was blasted by Riccardo Molinari and Massimiliano Romeo, politicians from the far-right League.

“Comparing Italians who emigrated across the world, who never received gifts or free lunches and dinner in hotels, to the illegal immigrants arriving today in Italy is disrespectful to the truth, history and common sense,” they said.

“Italians who emigrated brought work and quality to those who hosted them, and respected the rules,” the party said.

Milanesi, a professor and lawyer, was picked by coalition allies, the Five Star Movement (M5S) and the League, as foreign minister.

Roberto Fico, the M5S politician and president of the lower house of parliament, has also repeatedly spoken out against the anti-migrant policies of the League. Fico said his party is “different from the League” despite leader Luigi Di Maio and Prime Minister Giuseppe Conte supporting hardline moves by Matteo Salvini, the interior minister and leader of the League, to stop migrants arriving in Italy.

Millions of Italians, particularly from the south, emigrated between 1870 and 1920 and then again after the second world war until the early 1970s. Today, a lacklustre economy and high unemployment has led to more than a million young people fleeing to other European countries in search of work and better prospects within the last five years.