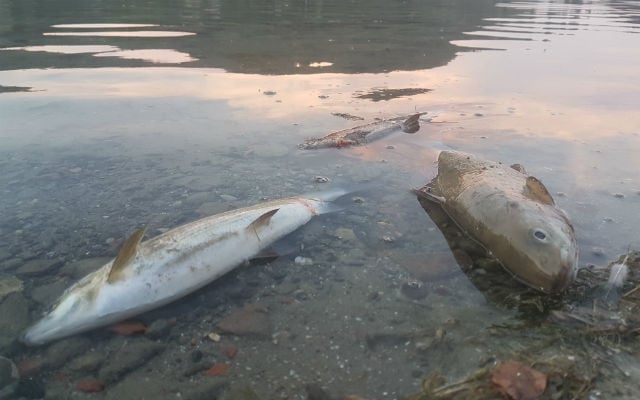 “We are extremely worried,” Philipp Sicher, head of the Swiss Fishing Federation (FSP), said in a statement late last month about the plight of fish in the current heatwave. “Indicators show that tragedy is near,” added Sicher.

The same warning noted that when water temperatures reach between 23 and 25 degrees Celsius, the situation becomes “critical” for fish. Last weekend the temperature in parts of the Rhine river reached 27.6 degrees.

“All waters are affected by the heatwave,” Eva Baier, water protection expert at the Swiss Fishing Federation, told The Local. “In the canton of Zurich alone, we've had to fish out and relocate the animals from 150 creeks across several hundred kilometres of watercourses,” added Baier.

A tonne of fish have already died in the Rhine in the canton of Schaffhausen alone, according to officials. In the canton of Thurgau, farmers there face a ban on pumping surface water as of the end of last month.

Baier and her team use several techniques to attempt to safeguard fish species vulnerable to the rise in water temperatures.

“In smaller waters, the animals are fished out using electric-fanned equipment and moved into surrounding cooler waters or, in emergency cases, to fish farms,” says Baier.
This involves using nets with electric charge, to which the fish are attracted, according to a piece in Swiss news portal Tagezanzeiger. This technique causes fish substantial stress, however, and is only used in extreme cases.
A preferred option is to cool the temperature of the water artificially. “In some stretches the water is aired so that enough oxygen is present,” Baier told The Local. Electric fans are used to cool the temperature of the water in some rivers. Photo: Samuel Gründler/Fischereiverein Schaffhausen.
The fans generate oxygen and cool the water's temperature. Photo: Samuel Gründler/Fischereiverein Schaffhausen.
“In other cases, cool water zones are created in which cooler streams are dredged and groundwater springs are placed under protection,” adds Baier.
Salmonids such as trout and grayling suffer the most under such intense heat, explains Baier. A dead grayling on the floor of the Rhine Valley inland canal. Photo: SFV-FSP, Rainer Kühnis. In many of Switzerland's water bodies, fish are fighting for their survival. Patrick Vogel Fotografie.
The Swiss Fishing Federation's rescue efforts in the face of one of the hottest and driest summers on record in Switzerland face several challenges. “The larger rivers, which have little shading, are essentially straight and have few protective structures – such as deadwood accumulations which act as safe havens for fish – make it hard to give the fish relief,” Baier told The Local.
READ ALSO: Swiss Fishing Federation: 'Indicators show that tragedy is near' for fish
READ ALSO: Sizzling temperatures leading to 'catastrophe' for fish in Swiss lakes and rivers
The numbers speak for themselves. “On the Rhine between Lake Constance and Schaffhausen the situation inthe warm waters of Lake Constance is particularly precarious. There has been more than one tonne of dead fish removed, especially grayling,” says Baier. A sign asks people not to swim in a cooler area of the Rhine where fish seek safety. Photo: SFV-FSP.
While the current heatwave is largely responsible for the plight of fish, human activity has contributed to the warming waters and the stress for several species.
“Swiss waters are under very high pressure in terms of usage,” Baier told The Local. “The water is used for energy production, for irrigation, as drinking water, for leisure activities (swimming, sailing, fishing, excursion boats), as cooling water and for sanitation. All these activities taken together – including the warming effect caused by human-induced climate change – put the fish under enormous pressure,” added the expert.
In many areas of the Upper Rhine Valley, safety zones have been created and swimming and sailing temporarily forbidden. A fish safety zone in the municipality of Diessenhofen, in the canton of Thurgau, northeast Switzerland. Photo: Samuel Gründler / Fischereiverein Schaffhausen.
Switzerland's nuclear power plants are also contributing to the fish's existential crisis. “All installations that use rivers for cooling and then return water to the watercourse contribute to the warming. Nuclear power plants have a significant impact in that respect,” says Baier. The Muhleberg Nuclear Power Plant near the Swiss capital Bern has been forced to reduce its energy production to protect flora and fauna in the Aar river, which the plant's cooling system uses. Photo: Fabrice Coffrini/AFP.
Despite the best efforts to curtail human activity in some of the most vulnerable bodies of water, the relocation and fanning efforts and the creation of cool water basin safety zones, in many areas nature, or man-made disaster, has simply taken its course.
“Several smaller water bodies are almost or completely dried up,” Baier told The Local. At this stage it isn't possible to calculate the total number of fish that have died, she added.
Approximately 70 species of fish live in Switzerland's water bodies, of which 54 are indigenous, according to fishfinder.ch.
A petition by the Swiss Fishing Federation, Aqua Viva and the WWF aims to lobby the government to implement “structural measures at power plants, so that fish can safely migrate upstream and downstream.”
READ MORE: Switzerland experiencing the hottest summer since 1864

WEATHER
‘We don’t have much time to waste’: How will climate change affect Sweden?

Swiss residents going through the latter stages of March, with its sunny skies and ‘Sahara dust’ would have been forgiven for thinking the time was right to put the winter jacket away.

However, winter-like weather is back in Switzerland, having swept across the country as March turned into April.

Around 50cm of snow fell on parts of Switzerland over the past few days, bringing with it unseasonably cold temperatures to wipe out the springlike weather of late March.

READ MORE: Everything that changes in Switzerland in April 2022

Swiss meteorological service MeteoNews reported that the snowfall brought welcome relief, particularly in central and lower Valais, in parts of Ticino and in most of Graubünden, cutting the risks of forest fires.

This week temperatures are expected to rise but only slightly, with MeteoNews forecasting between 7 and 10 degrees and rain through Tuesday.

Wednesday should be sunny and about 13 degrees, followed by changeable and windy weather in the second half of the week.

After that, temperatures should continue to increase, with 20 degrees forecast for much of the country from mid-April onwards.

It is too early to forecast with certainty what the weather will be like over Easter, but we will keep you posted!

You can follow the forecast for your area here.