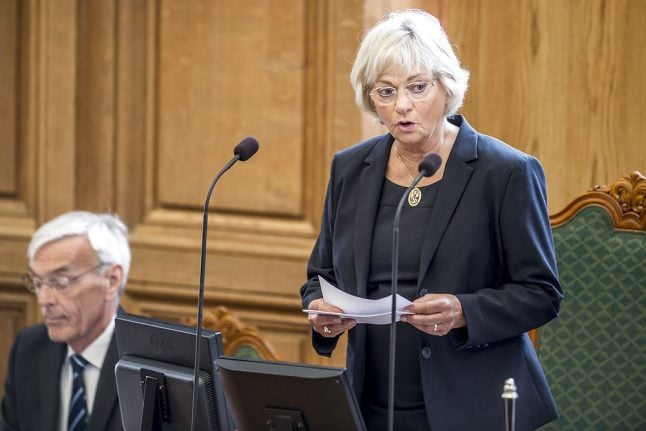 Kkærsgaard on Wednesday gave a speech at the Thingvellir, a historic site and national park near Reykjavik that was the location of Iceland’s Althing parliament from the 10th to the 18th centuries. Iceland switched from home rule to full independence from Denmark in 1918.

Icelandic MPs from parties opposed to the views of the Danish People’s Party, the right wing anti-immigration party which Kjærsgaard co-founded and led from 1995 to 2012, chose to protest her appearance as a representative of the Danish parliament, which was reportedly given at short notice.

Helga Vala Helgadóttir of the social democratic Samfylkingin party walked out during Kjærsgaard’s speech, while the Pirate Party, which broke through in Icelandic politics on a direct democracy platform in the wake of the country’s banking crisis in 2012, boycotted Kjærsgaard’s speech completely.

Samfylkingin party leader Logi Einarsson said it was “regrettable that one of the foremost representatives for hatred against foreign nationals in Europe was allowed to take the speaker’s stand on this important day,” Politiken reports.

Thórhildur Sunna Ævarsdóttir, parliamentary leader with the Pirate Party, said her party did not wish to give legitimacy to the anti-immigration views of Kjærsgaard and the Danish People’s Party.

“We are now seeing that fascism, racism, hatred, anti-democratic values come in different forms all over the world. We see it in the United States, we see it in different European countries, and we have seen it develop in our neighbouring countries like in Denmark,” Ævarsdóttir told media in Iceland according to Politiken.

The speaker of the Icelandic parliament, Steingrímur J. Sigfússon meanwhile said it was a “great honour” for the Althing “to have the speaker of Folketinget [Denmark’s parliament, ed.] here today.”

Icelandic Journalist Arni Snaevarr told Politiken the protest by parliamentarians was “nothing to do with Denmark and everything to do with the views of Pia Kjærsgaard.”

Kjærsgaard responded to the protest on Thursday by lashing out at the political parties that protested against her.

“I came to Iceland in my role as speaker of parliament and to represent Denmark on a special occasion for Iceland and give a speech free of party politics, and all these terrible remarks were made about me, which are thereby aimed at all of Denmark. It’s exasperating,” she told Politiken.

She said the Pirate Party was an “inconsequential party” party but expressed her disappointment at the Social Democrat stance.

“Do they have any idea what is going on in their sister parties around the world? If it had been (Danish Social Democrat leader) Mette Frederiksen, this would never have happened, because she feels more or less that same way as me [with regard to immigration, ed.],” the former Danish People’s Party leader continued.

READ ALSO: Social Democrats go it alone in break with allies over immigration

She added that she was not aware of any form of protest while actually giving the speech, but was informed of it after the event.

Kjærsgaard said she should not have been subject to political dissent when representing Denmark in an official capacity.

“It is not very democratic to do this against someone who is invited in a completely different capacity. The Pirate Party must have puberty problems, and the Social Democrats in Iceland obviously don’t know where they stand,” she said to Politiken.

PARTNER CONTENT
QUIZ: Which influential Icelander are you?
Url copied to clipboard!