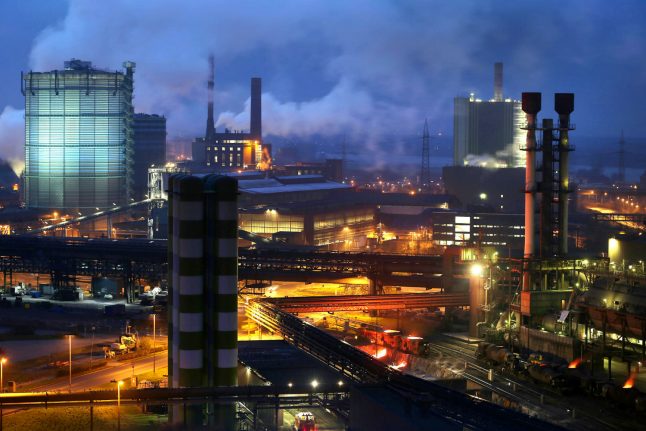 The leadership chaos sparked fears of further job losses as some key investors push for redical surgery on the two-century-old conglomerate that makes everything from elevators and submarines to car components, turnkey industrial installations and steel.

“It is clear that ThyssenKrupp is at a crossroads…aggressive restructuring may be in the cards,” analysts at US investment bank Jefferies wrote Tuesday after supervisory board chief Ulrich Lehner followed chief executive Heinrich Hiesinger out of the door late Monday.

Hiesinger, who quit earlier in July, and Lehner were both fierce defenders of keeping ThyssenKrupp's sprawling structure intact.

“I take this step consciously to enable a fundamental discussion with our shareholders on the future of ThyssenKrupp,” Lehner said in his parting statement.

“A break-up of the company and the related loss of many jobs is not an option,” he warned in a final swipe at his opponents.

Tracing its roots back to 1811 and a household name of German industry for  over a century, ThyssenKrupp booked 41.5 billion euros ($48.7 billion) of revenue in its 2016-17 financial year and employs some 159,000 people worldwide.

July should have been a month of optimism for the Essen-based group, after it sealed a deal in late June with India's Tata to merge their European steel operations.

Bosses had hoped to find 400 to 500 million euros of annual savings, in part by shedding up to 4,000 jobs, persuaded that the merger would secure ThyssenKrupp's historic core against competition from a global flood of cheap Chinese steel.

But activist shareholders like Swedish investment firm Cevian and the US hedge fund Elliott want management to go further.

The two shareholders have been pushing for its dismantling with “methods that could even be described as psychological terrorism,” Lehner told weekly Die Zeit earlier this month.

Beyond their fundamental differences with bosses over the company's direction, the investors also were displeased by the details of the Tata deal.

News that Hiesinger backer Lehner had quit bounced ThyssenKrupp's stock to the top of the DAX index of blue-chip German shares, gaining 8.6 percent to trade at 22.37 euros by 1100 GMT Tuesday.

The share price appears to have tracked investors' hopes of realizing their dream of breaking up the group to sell off its units or list them independently on the stock market.

Its value had fallen in the wake of the Tata deal as the Alfried Krupp Foundation – the historic anchor shareholder which controls 21 percent of the firm – spoke out against unbundling its divisions.

But the institution, whose founding document calls for ThyssenKrupp to be preserved as a whole “as far as possible into the future”, no longer has the blocking minority needed to hold off other shareholders.

Cevian and Elliott has a combined stake of about 20 percent of the group's shares, making them more or less evenly matched with the foundation and leaving neither side with an uncontested claim on leadership.

Business newspaper Handelsblatt predicted that “those who have to pay the price for this development could be the workers,” with hoped-for savings at the different units after a breakup likely to come from more job losses.

“With the foundation and all the shareholders, we want to try and maintain the enterprise,” he said.

Former US president Donald Trump’s administration slapped extra tariffs on Spain’s iconic agricultural export in 2018, considering their olives were subsidised and being dumped on the US market at prices below their real value.

The combined rates of the anti-subsidy and anti-dumping duties go as high as 44 percent.

The European Commission, which handles trade policy for the 27 EU states, said the move was unacceptable and turned to the WTO, where a panel of experts was appointed to examine the case.

In Friday’s ruling, the WTO panel agreed with the EU’s argument that the anti-subsidy duties were illegal.

But it did not support its stance that the US anti-dumping duties violated international trade rules.

The panel said it “recommended that the United States bring its measures into conformity with its obligations”.

“We now expect the US to take the appropriate steps to implement the WTO ruling, so that exports of ripe olives from Spain to the US can resume under normal conditions,” he said.

The European Commission charges that Spain’s exports of ripe olives to the United States, which previously raked in €67 million ($75.6 million) annually, have shrunk by nearly 60 percent since the duties were imposed.

The office of the US Trade Representative in Washington did not immediately comment on the ruling.

According to WTO rules, the parties have 60 days to file for an appeal.

If the United States does file an appeal though, it would basically amount to a veto of the ruling.

That is because the WTO Appellate Body — also known as the supreme court of world trade — stopped functioning in late 2019 after Washington blocked the appointment of new judges.