The crew of the Dornera were found at dawn in two rafts and a small boat, 308 nautical miles off Argentina's Patagonian coast, the Navy said in a statement.

Most of the crew are Spanish but there are also Moroccans, Peruvians and Indonesians amongst them, spokesman Enrique Balbi said.

The 25 survivors and dead sailor are aboard an Argentine fishing boat heading back to dry land and expected to arrive in Patagonia in around two days, Balbi told AFP.

To reach there, the Argentine boat must negotiate 570 kilometres of open water through a South Atlantic storm in the middle of winter, said Balbi. The Dornera is believed to have capsized after being inundated by “a lot of water down the stern ramp where the fish nets are pulled up,” according to Balbi.

“The water entered the engine room and caused a power cut,” he said. “That made the boat uncontrollable in a storm.”

“Realizing a shipwreck was inevitable, the crew abandoned ship.” Balbi added: “At this time of year, adverse conditions created by low pressure generate a lot of wind and big waves. This can happen to any boat when there are big waves.”

Spain picked up a distress beacon and alerted the Argentine Navy, which sent out two fishing vessels to locate the sailors.

Balbi said the boat, owned by Spanish seafood company Freiremar, was fishing in international waters but that “it's still our search and rescue area”.

Two aircraft have been sent to Patagonia to help in the search and rescue operation for the missing sailor. 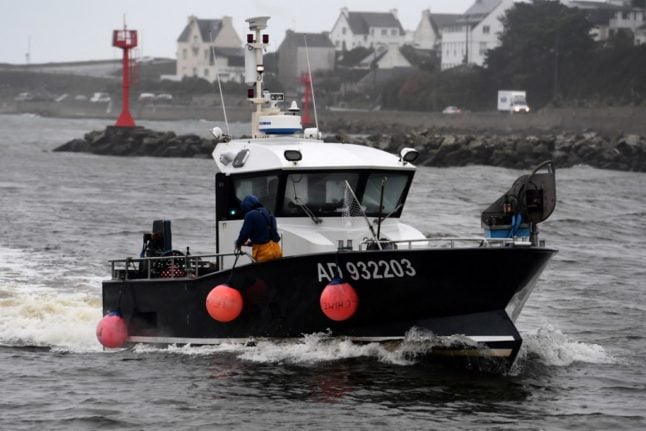 For now, it is a war of words. However, the French minister for the sea, no less, has warned that she will, if necessary, switch off the lights in France’s tiny, troublesome near neighbour.

Over 90 percent of the tiny UK crown dependancy’s electricity comes through three cables from France just over 12 miles away.

What’s it all about? Fish of course. And Brexit.

Who is right and who is wrong?

There is some right and some wrong on both sides but, as far as I can establish, the Jersey government has behaved oddly – provocatively and with less than complete honesty. There is no similar problem between France and the other big Channel Island, Guernsey.

The French government suspects that Boris Johnson’s government has engineered the dispute as part of a wider campaign of minor harassment of French fishing boats to distract from its own surrender on fisheries rights in the Brexit deal just before Christmas.

The UK government says that fisheries rights in Jersey waters are an entirely an affair for the island’s (or bailwick’s) government. Britain is responsible only for the Channel Islands’ diplomatic relations and has been seeking to broker a deal for Jersey with the EU and France.

That may be legally correct. The Channel Islands are the only fragment of Duke William’s dukedom to have remained independent of France. They are “owned” by the Queen but they are not part of the UK and were never part of the European Union.

The present dispute has similarities, however, with a completely unnecessary spat engineered recently by the British government over the details of post-Brexit, French access to the waters between 6 and 12 miles off the English coast. In both cases, the Department for Environment, Food and Rural Affairs (Defra) speaks of “unfortunate misunderstandings” over the details of licencing arrangements for French fishing boats.

I would be happy to accept such assurances from Defra if it did not have such a long record of lying about fishing – especially under its present Secretary of State, George Eustice.

Defra over-fished its “trust us” quota long ago.

On the other hand, the French are not entirely blameless. It was somewhat excessive of Annick Girardin, the minister for maritime affairs, to threaten to turn off Jersey’s lights while the dispute is still under discussion. Some of the nationalist rhetoric of fishermen’s leaders and local politicians in Normandy and especially Brittany has also gone off the deep end.

The complex pattern of fishing rights around and in between the Channel Islands has been a vexed question for centuries. Such rights were outside the EU Common Fisheries Policy.

In 2000, Britain and the Channel Islands government signed an agreement with France (The Treaty of the Bay of Granville) which established a pattern of rights for French boats up to 3 miles from the islands’ coasts. Last year, Britain and the islands said they were terminating the treaty as part of the “it’s all our fish now” policy as the end of Brexit transition approached. An interim deal was reached.

Despite anxious complaints by Norman and Breton fishermen and politicians, the question of the Îles Anglo-Normandes was not addressed in the final flurry of Brexit trade negotiations in December. Last month it seemed this had finally been settled.  French boats which had habitually fished in Channel Islands waters would automatically be licensed to continue doing so.

Over 250 Norman and Breton fishing boats rely on their catches around the islands – an industry which supports 900 families and 2,000 jobs on sea and land. At the same time, Channel Islands boats depend almost entirely on their rights to sell fish in Granville, Cherbourg and other French ports.

Claude La Vaullée, a Norman skipper who has fished off Jersey for 40 years, found that his boat, Le Cach, had been given the right to fish for 11 hours a year. He told the regional newspaper Ouest France, that he and other skippers had now equipped their vessels to “re-stage the Battle of Trafalgar”.

Such restrictions were not mentioned in the negotiations and were not communicated to Paris or Brussels, French officials say. They were a unilateral decision by the Jersey government.

David Sellam, head of the joint Normany-Brittany sea authority, said : “We are confronted by people who are not trustworthy. Jersey has been taken over by an extremist fringe, who want to reduce French fishing access and profit from Brexit.

“We’re ready for war. We can bring Jersey to its knees if necessary.”

Jersey politicians say it’s all a big misunderstanding (which suggests that they are preparing to climb down). The external Relations Minister Ian Gorst told the BBC yesterday that the licences issued last Friday were based on proof of past fishing activities. But there was no time limit, he said. The French fishing industry could provide more evidence if they needed extra, or more generous, licences.

Do the French fishermen have such evidence easily available? Some do and some perhaps don’t.

But all fishing activity is now so strictly regulated that it should not be difficult – if there is goodwill on all sides – for the French government to provide reasonable proof.

Is there goodwill on the Jersey and UK side? I expect that the threat of black-outs (however excessive the threat) will concentrate minds in Saint-Helier.

I suspect this dispute will not last long.