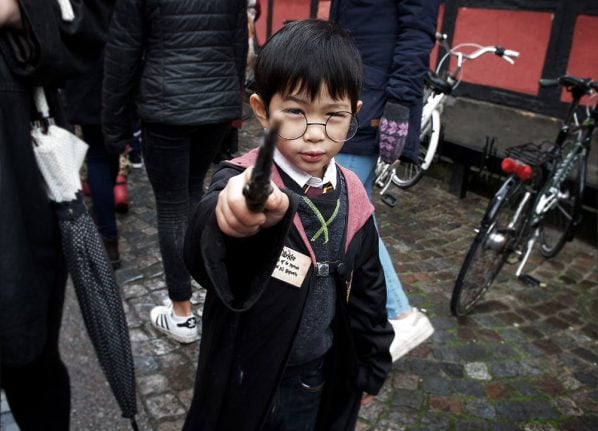 A young wizard at the Harry Potter Festival in Odense in 2016. Photo: Sonny Munk Carlsen/Ritzau Scanpix

But rights lawyers from Warner Bros. have used the Immobulus charm on the yearly event, which will be discontinued under its current name, Ritzau reports.

The Hollywood film giant, which owns the rights to the hugely popular movies based on J. K. Rowling’s books, has moved to prevent Odense Libraries from using names and images related to the films.

“We are a non-commercial event, as we have stated before. But 13,000 people are coming to this festival,” project leader Søren Dahl Mortensen said.

“We have now received official instruction that we may not use the Harry Potter universe. We have likely become too big for them [Warner Bros., ed.].,” he added.

The festival started in 2003 as a small event at Næsby Library in Odense, but has since grown dramatically.

Several cultural organisations and up to 130 volunteers from across the city are involved.

Elements of the event included a train ride where visitors can take the ‘Hogwarts Express’, writing for the Daily Prophet and broomstick riding.

Potter fans from all over Denmark as well as from the U.K. are reported to have attended, and even Rowling herself visited in 2010. J.K. Rowling in Odense during the festival in 2010, when she was also awarded the Hans Christian Andersen Literature Award. Photo: Claus Fisker/Ritzau Scanpix

But the event must now be transfigured after rights holders apparated in to put a stop to the use of the Potter name.

“We will continue but will have to call it something else. Maybe we’ll call it ‘Magical Days’ or ‘The Festival That Must Not Be Named’. We don’t want to stop,” Mortensen said.

“We don’t quite understand Time Warner’s position because we think we’re keeping the universe alive. A lot of children are looking forward to coming and are making their costumes at home in preparation,” he added.

New names must now be found for all of the festival’s aspects that infringe rights laws. Mortensen said that paying for the rights was not an option.

“We are not interested in that. We cannot afford it and I don’t know whether it’s an option,” he said.

The Danish festival can take some consolation in the knowledge that it is not the only Potter event to appear in the Warner Bros. pensieve.

“Warner Bros. is always pleased to learn of the enthusiasm of Harry Potter fans, but we are concerned, and do object, when fan gatherings become a vehicle for unauthorised commercial activity,” the company told AP in January.

The Odense event is scheduled to take place from October 18th-20th.

“We hope people will still want to come. A lot of families have discovered it is a laid-back festival that is not expensive and commercial,” Mortensen said.