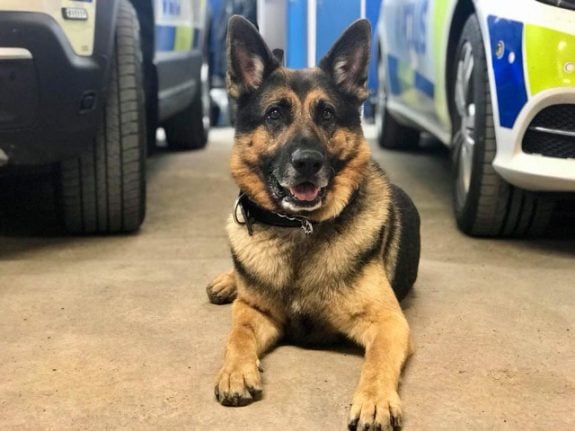 Sacko the police dog has been hailed as a hero. Photo: Polisen i Dalarna/TT

The man's wife raised the alarm when he failed to return from his daily walk in Dalarna. Officers spent five hours attempting to locate him before German shepherd police dog Sacko was called into action.

“We had been out for half an hour when Sacko got wind of a scent. I sent him on a search and he moved into the forest and marked something. I got there and found the man on the ground, able to talk but freezing and injured,” Anders Sjöberg from Dalarna police explained.

The man was taken to hospital, and Sacko's efforts earned heaps of praise on Facebook, where Dalarna Police shared the story.

A “very nice, social and cuddly dog” who is also “very smart and happy to work when he’s on the clock”, according to Sjöberg the hero of the day only wanted one simple thing in return for his efforts.

“He gets his ball afterwards, and that’s the best thing in his world. Even if we gave him a nice bit of sausage he would spit that out for the ball,” he concluded.