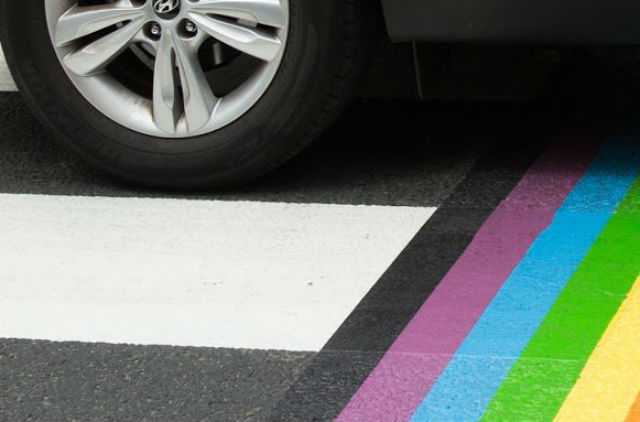 “LGBT dictatorship” and “Hidalgo out!” were scrawled overnight on the road at the crossings in the lively district that is full of bars and restaurants and has long been popular with the city's gay community and visitors.

Paris Mayor Anne Hidalgo on Friday morning declared that she would again be asking police to investigate the vandalism, which she said “will not remain unpunished,” and ordered municipal workers to remove the offensive slogans.

Similar insults had been painted on the crossings earlier this week, which prompted Hidalgo to declare that the multi-coloured road markings would become a permanent feature in the Marais.

The mayor said it would send a “positive signal “and would be a ” welcome message” for visitors to the neighbourhood.

She tweeted out the message: “Paris is a city of refuge that embraces the Republican values of freedom, equality and fraternity. In order for these values to be recorded forever, the rainbow pedestrian walkways created for Gay Pride will be permanent!”

Hidalgo also announced that two more pedestrian crossings would be adorned with the rainbow colours. The Gay Pride march will begin at Place de la Concorde at 2pm on Saturday before heading along Rue de Rivoli ,past the Louvre, and then on to Place de la République where the party will continue into the evening. 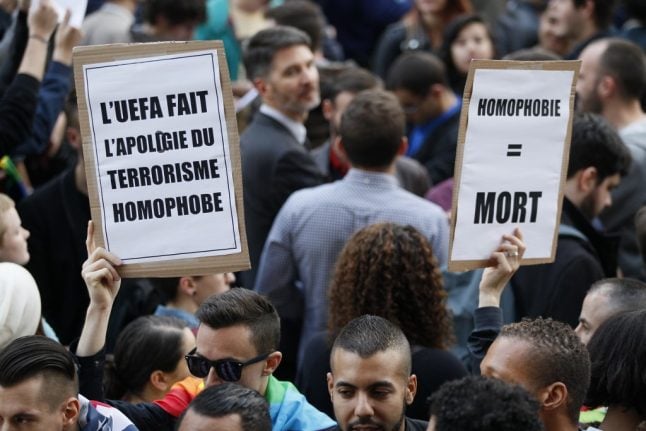 Illustration photo: AFP
The move came three years after France lifted a 30-year ban on gay and bisexual men donating blood, on condition they practise sexual abstinence for 12 months to guard against HIV transmission.
“This rule, which is still in place, effectively excludes 93.8 percent of gay men from donating blood,” said a joint statement by Stop Homophobie, Mousse, ELCS (Local officials against AIDS), SOS Homophobie and Familles LGBT (lesbian, gay, bisexual, transgender).
The complaint was lodged on Thursday with the commission in the hope that the policy will be formally recognised as illegally discriminating on the basis of sexual orientation.
READ ALSO: Until July 2016, gay and bisexual men had been completely barred from donating blood under a ban which went into force in 1983 shortly after the HIV virus was discovered.

It is a sensitive issue in France, where hundreds of people died in the 1980s after HIV-tainted blood was distributed by the national blood transfusion centre.
This law “creates legal uncertainty for LGBT individuals because it makes possible discrimination on the basis of sexual behaviour”, said Etienne Deshoulieres, a lawyer representing both the groups and an individual named in the complaint, who is identified only as “Maxime”.
'Humiliated'
Earlier this month, Maxime went to give blood at a centre in the Paris suburbs, and while giving his details, said he had been in a relationship for 18 months.
“The doctor told me that was problematic, that I couldn't give blood,” he told AFP, saying he was advised to make a plasma donation instead, given that he had only had one sexual partner for the past four months.
“I felt humiliated,” admitted Maxime, a former member of the security forces who has also filed a complaint with the office of France's human rights defender.
“We are categorised as both 'gay and banned'.”
In response, Stephane Noel, who heads EFS, France's national blood donation service, told AFP it was understandable that a prospective donor “could be disappointed” if turned away.
Doctors working for the service underwent “significant training” in order to explain “with a great deal of sensitivity and respect… why we advise against” certain donations, he said.
Last year, a similar complaint was lodged with the European Court of Human Rights on grounds it undermined the fundamental human rights of gay and bisexual blood donors.
“The case is still pending,” said Patrice Spinosi, the lawyer who filed the complaint.
According to the latest public study in France, opening up blood donations to gay donors in 2016 has not increased the risk of HIV transmission via blood transfusion.
SHOW COMMENTS
Url copied to clipboard!